It could possibly have been a bad apple, but another plane I 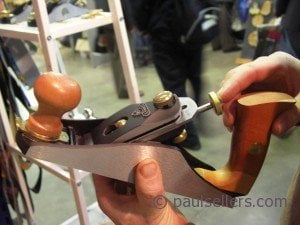 considered for a review turned out to be substandard. For some time I have heard about the new Sweetheart line coming in from the Stanley stable. I got excited when in a magazine the press release stated that Stanley of Sheffield had brought out a new line of high-end planes under the Stanley Tools sweetheart banner so I called Stanley in Sheffield, UK who said they would email me a time and date to visit the plant in Sheffield to see where and how the planes were made. A few days later I received an email saying, “I am afraid the planes are not made in the UK, they are actually manufactured and assembled in Mexico so I am unable to help you.”

Now this begs the question many people have to ask themselves: Just where are most of the so-called British tools actually made these days? Well, it’s a mixed bag and it’s hard to actually get to the truth because of surreptitious marketing strategies used by some UK companies who have no problem waving the Union Jack and hiding the country of origin from the end user. Remember that all the old names of Marples, Record, Preston and many, many more have been bought out year after year. As I understand it, and I stand to be corrected, American Tool once bought out Record and Praxair bought out American Tool and then along comes Rubbermaid who now, unless things have changed bought out Irwin and the Record name. So this British birthed company has very little connection to its former roots and is owned by a plastics giant. Many of the products flying the Sheffield address have little to do with British manufacture.

I picked up the Stanley plane above at the Harrogate Woodworking 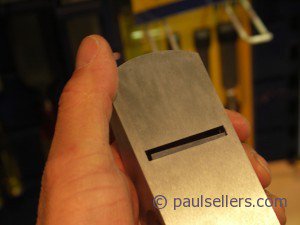 Show last autumn. I was really surprised at the poor quality and the ill fitting components not the least of which was the oversized clunky handle. It was something of a Norris style knock-off, but without any fine attention to detail at all. I am so sorry not to be able to recommend this plane but don’t be fooled; unless something has changed, this plane is manufactured and assembled in Mexico to be sold to the massive US market. WHy they didn’t make the much needed change in their Sheffield plant and reenter the market with a quality plane I do not know. As Sheffield shuns it’s historic past to embrace its new and modern look we must ensure that we know who, why and what we are dealing with.

9 thoughts on “Another plane that doesn’t smell as sweet”