A saw by any other name could cut as sweet

I have many favourite saws. One in each of the categories. You’ve seen them in past posts here on my blog. I don’t collect them. I can’t imagine the empty vanity in collecting good saws you don’t use to work work wood with. I want to wear out all of my saws, but it’s unlikely that I could even wear out one of my personal saws and here is the reason. 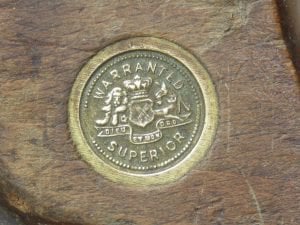 Forty six years ago, as an apprentice, I bought a Spear & Jackson tenon saw, a Sandvik panel saw, a Disston rip saw and a Disston panel saw. I have used them since 1965, throughout my life as a working craftsman, (that means most days) sharpened them myself month after woodcutting month, and they are still have about two-thirds working steel left in them. I think that Sandvik was the best of the bunch as far as lasting simply because the steel was the best. As for the design, I still don’t care for the plastic handles, they make me sick to look at them really.

Sandvik was one of the first to disgard wooden handles and their first plastic handles with the dragon symbol was at least hand fitting. That says something for its company carbon footprint. It pioneered disposable saws by hardening the steel teeth and adding cheap plastic (spastic) handles under the more recent name of Bahco. It is the ultimate disposable saw. It doesn’t need to be, and we can do nothing about it as the company proved its superiority by being in control of what we buy. You see, all the joiners and carpenters I meet tell me that they no longer use “those old saws.” The buy ones that can be thrown away because, they reason, it’s now quicker easier and cheaper to, well, just buy another. They don’t see that they have been rendered impotent. They can’t sharpen saws anymore, they don’t know how. They don’t know a man can sharpen and set a saw in a few minutes and that a good saw will last a hundred years. Anyway, Sandvik’s assets are 90 billion and every carpenter and joiner thinks that they are wonderful because they don’t have to sharpen saws any more.

But look at this. This is a Disston saw. Look at the handle, the shape fits a man’s hand like the hand inside a glove. This saw was made to celebrate an event for Hammacher Schlemmer in New York in 1848.

Imagine. I use this saw in place of the Sandvik I could no longer stand the sight of with its ugly plastic handles instead of wood. You see, I wore out the plastic handle. It began to break up. You can’t appreciate a wooden handled saw until you’ve had one like this where it feels as though it’s been custom fitted to your own hand. This handle is oak as you can see, but just ponder the shape for a minute. Imagine the imprint Henry Disston had on this design for saw handles. I am grateful to modern day US makers like Bob Wenzlof of Wenzlof Saws and Lie Nielsen who spend much time refining saw handles from real wood. They set the standard and we should look to them and support them as they stand against the flow of mass making to establish care in manufacturing high quality hand tools for us. 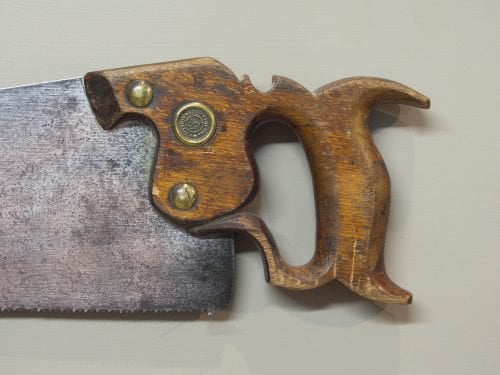 17 thoughts on “A lovely Disston handsaw”