Today the castle workshop was as busy as ever with people passing through and asking questions the whole day. I spent much of my time talking to visitors as I tidied my bench and the workshop after last week’s classes. I demonstrate my craft as I have for over two decades now. It gives others the opportunity to feel the width and breadth of craftwork and see the depth we craftsmen see and strive for in the everyday work we are immersed in. But it’s much more even than that. I am able to share life experiences as a working creative artisan. Something most people will never know. 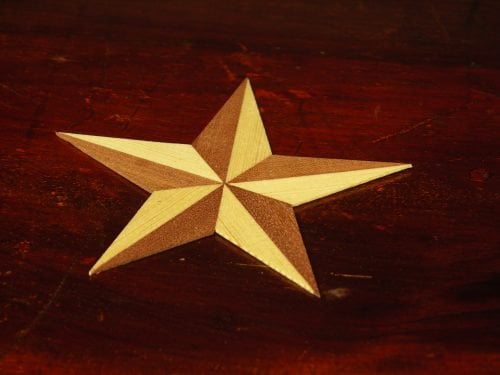 I made a star with five points from light and dark woods as a demonstration for inlaying geometric shapes. I recall the first time I saw an apprentice setting up a 3hp chops saw to cut the angles. The profound danger was evident and asked him what he was doing. He responded that that was the way he had been shown to do it. I had never cut a five-pointed star in my life but I told him to follow me to the bench. I cut a perfect five-pointed star from ebony and curly maple, similar to the one shown, in less than 20 minutes. A very simple woodworking procedure. Safe, economically viable and superbly accurate.

2 thoughts on “Seeing the point in hand work”