Yesterday was a wonderful day of restoration. An unusual day really. As we stood around the bench we had a conversation going on in Spanish between one man from Argentina, one from Texas and another from Mexico City in Mexico. The rest of us were left out for a few minutes. 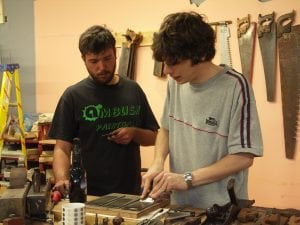 This is always a remarkable workshop filled with surprises. People bring in their own tools or work on mine. We dismantle planes and rework saw teeth until they work like the best. Anything from wooden plane era is up for discussion and demonstrations prove that they were never abandoned because they didn’t work and work well; they were abandoned because they didn’t keep pace with the industrialising of people and the economic growth of capitalism. The demand for more in consumerist groups large and small created the demand for the ever-cheaper and craftsmen and women lost work to mass manufacturing systems that rendered them obsolete. So today we live in a world of imports, watch our young people stack shelves in supermarket stores and draw benefits to support non-producing occupations. 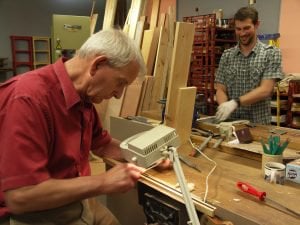 But not today, 70% of those students attending were under the age of 30. They were alongside those of us over 60. The enthusiasm and excitement was an average age of around 7. No, this is not child’s play, and tools are not toys for grown men as some, mostly women but men also, suggest, jokingly, but seriously undermining the real value of hand work and the tools we use. Such id the way of those who know nothing of what work really means to life.

This is the way of work. It’s the insight into the past that made millions of workpieces ranging from cathedrals to gates and ocean-going ships to logging saws. 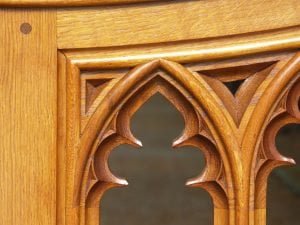 Yes, it’s true we had fun, but we can’t help that if the work we do is enjoyable. We learned a great deal; So much, by the end of the day they knew planes inside out by dismantling, fettling, fine tuning, sharpening, reworking and retrofitting. Saws that did not cut, cut.

These gates are newly made and installed at Llandygai Church. How lovely the work is throughout.

Vicente, from Mexico, brought in the largest of treasures in the smallest of forms. 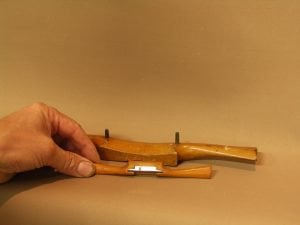 This spokeshave is so tiny, so lovely and so perfectly made. Pristine! It is a treasure and an example of mastery in handmaking hand tools. It was made by C S Johnson of Sheffield. All of Vicente’s tools were his grandfather’s who was from Stockport, UK. My home town. 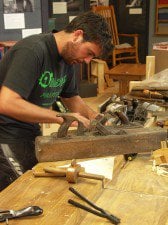 Vicente with his grandfather’s tools

Caleb from Texas worked on prepping a #151 Stanley spokeshave ready for use. Caleb has been through my foundational course and is ready to return to the US where he and his wife Charity live. They return with their son Justus in two weeks time.