My hands pulled the plane from the cardboard box, lifting it from the bubble wrap and parcel paper some might say like a newborn from its soft, clean blankets. I had held many planes like it before, hundreds of them. A note dropped to the table as I levelled the sole and gripped the front knob with my left. I tightened my grip with both hands in forward planing motion and the smoothness of the wood spoke simple words in silence to me. A man’s hand had fashioned the contours of its handle, his sweat and oils permeated the core of the rosewood for almost 60 years. 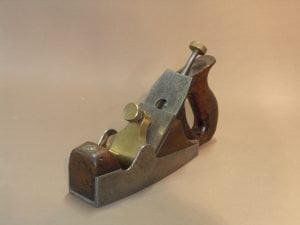 I’m glad you bought my old plane. I’m too old now, and my hands have held onto it for too long. Time to pass it on to someone who will use it. I hope that you enjoy it as I have. I bought this plane new when I was 18 years old and it served me well. Mat Robertson.

You see with every tool there comes with it a spirit if you will. That spirit can be a sense of neglect sometimes. The original owner died, leaving the plane in good shape to a son or daughter who cared too little for the old man’s release. Sometimes they were incapable of sensing the true value of the tool. They owed nothing to it and though nought of the tool actually making the money that covered them with a roof and put bread on the table. Expectancies changed with the newer more refined generation. Behold, all things or new, the old has passed away. No matter how you slice it or try to splice it, a computer keyboard and flat screen cannot convey the essence of a man’s hand, his muscle and sinew, the stresses of lifting and shoving and canting and bending under the pressures of planing wood. The refined generation no longer connects to the daddy of the past. It cannot connect and never will it again. 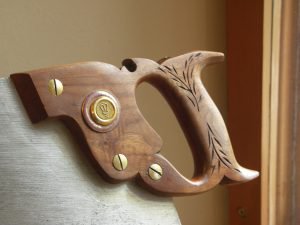 There’s often a sense of transfer when transactions like this take place. It’s a transfer of rights of ownership that go with the saw. At least that’s the spirit behind it. It’s often inexplicable. A man once came by my workshop with ten hand saws in a wrapped bundle of brown manila paper and cloth. He undid the jute string and opened them up to me like the pages of a book. I began to read the pages as turned from one to the other. He read between the lines on my face. Was I the one to accept the unasked question an old craftsman might never ask? Was I the one to use the saws for another generation? Another question quickly followed, this time audibly and straight: Will you give me a hundred pounds for them? I hesitated, but then said, “Yes.” The saws were worth more. One might be worth a hundred alone, but I never paid that much for a saw. I rarely paid more than five, and that would for a good one. These were good saws. Fine saws really. The price mattered nothing to him nor to me. To give them away meant they were worth nothing to him. How could that be? They had fed him and clothed him, bought his house for him and filled his car with petrol for five decades. Two of his children had gone to university by his leaning into the saw strokes of a million cuts. He bought his first baby’s cradle wood with every tooth cut. How can a man put a price to such a thing?

I find a truth in this one thing: It’s only when a tool has served you through a lifetime that it’s real worth is truly felt. My planes have fed me and then, when I married, my family, since 1965. I mean they have literally transformed a thousand pieces of wood into tables and chairs, dining tables, coffins and baby caskets, door frames, window frames and tool boxes and workbenches. I cannot think of more than a handful of days in a year (Sundays) when I didn’t pick up one plane or another to work with. Imagine that! 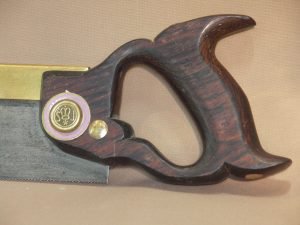 I have had every plane there is to be had, yet, I have to say, none, not one, can compare to the Stanley 4 1/2 I bought in my youth. Nostalgia? Sentiment? Well, maybe a tad, but that’s not really at the forefront here. I left many things on another continent once as I left for the promise of a new life with my family. As I packed a few precious belongings I sifted through my tools and picked out my most faithful friends. I buried them safely in my clothes. They remain with me now. Not all of my tools could come with me. Some of my planes and saws, still valuable to me, will join me again one day. Until then, I will remember them always. My though I am grateful for my precious ones, I sadly miss those I bought in my youth. I wonder who will take my tools when I can no longer lift them from the chest. My sons and daughter will likely want them. They know their worth and will be saddled not with nostalgia and sentiment. They’ll use them as I did, care for them as I did and perhaps, to my grandsons and daughters, transfer them as I did.

2 thoughts on “Transfer of rights”