Faces and hands of woodworking friends are important because they tell you much about the people behind them. Here are some I like. 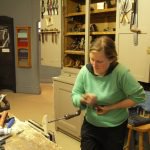 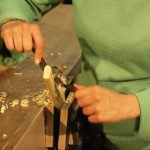 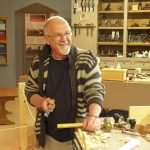 I have been working more with ‘Women working wood.’ A programme I am putting together to equalize disparities and address some issues important to successful woodworking for women. I have trained hundreds of women woodworkers over the years and established a range of useful techniques that establish true skill without resorting to substitutes like machines.

Serious questions occur in the everyday workshops I hold as mix-gender classes. Questions that may not be readily apparent like these:

1: Should we offer woodworking for women only?

2: Why are women intimidated by so called power tools (Industrial machines even scaled-down versions)?

3: Can women achieve the same standards as men or even surpass them?

4: Should there be special tools for women?

5: Should there be special projects for women?

Do you women have any such questions that will clarify differences and provide solutions.

Let me give some perspectives I’ve seen for myself as a teacher.

Question 1: Why would we have women-only woodworking classes?

My Comment: I was surprised that in the USA the percentage of women to men in my classes was highly disproportionate. Roughly, less than 2% of the classes appealed to women, which was radically different to the UK which presently stands at 25%. Though there may be many other reasons that women choose not to do woodworking, several intimidating factors exist.

In general, I find that women are more careful than men, but the carefulness is based more erring on the side of caution than being more precise or accurate. I think that in general women read instructions and follow them to the letter whereas men rarely read the instructions, follow them only partially, and waste time correcting their mistakes if they can be corrected.

I have no evidence that women are more precise in their work or more careful in their work but more cautious and therein lies the difference. Generally this may lead to fewer mistakes leading to greater productivity and economic time use. But when a person delivers the tool to the cut exactly and with full force accurately distributed, the work is exponentially faster. No matter how you slice it, it’s practice and rote repetition that leads to accurate power.

If one woman attends a class with 15 men, that woman will to a greater or lesser degree feel intimidated in many ways, not the least of which is the differences in physiological strengths and practices men are used to deploying in manual labour.

My Comment: It may seem surprising, but I find that many of today’s younger men are equally intimidated. I also think that both men and women should be. Machines used for woodworking have the power to maim and kill and regularly do. They are after all industrial methods for working wood and not woodworking as such but millwork .

Simply turning on any machine used in woodworking stimulates the mechanisms that warn us of danger. Women, generally respond to these signals more readily and withdraw from the situation to a safe distance. The inherent dangers in machines are transmitted into first the machine sound itself and then the actual cutting sound as the blades and teeth cut the wood at such exceedingly high speeds. Both of these sounds individually are frightening. Combine them and they are horrifying, add to that the known dangers and the high risk of damaging the workpiece and that worsens the dilemma, losing part of your body raises the hackles and there is really good reason to be intimidated. Unfortunately, overcoming these fears is now seen as a mark of a woman maturing in what was once considered a man’s world. I think that it’s better to mature in mastering skills rather than machine milling. Strength is a major part of milling wood. Table saws take strength and manly confidence to use them. That doesn’t mean that women shouldn’t use them. It simply means that they must decide whether they are essential to their mastery of wood.

Question 3: Can women achieve the same standards as men or even surpass them?

My Comment: I haven’t noticed a high percentage of women actively involved in dedicated fulltime employment as woodworkers. Those that have seem not to strive for creative independence so much as income. Now I don’t believe that you have to earn your income from woodworking to be considered a woodworker, but I do believe others should see your work to evaluate whether you, as a woman, accomplish the same standards in woodworking as a man or indeed, a man as good as a woman.

Yes, there is no reason for any disparity in this area of craft work. Women do work wood as well as men and should find no problem achieving the same standards.

I find that women have much more to overcome than men because men are encouraged in the manly pursuit at an early age and women are encouraged to enter the field primarily to prove that life is now equally fair and women do woodworking too. When we finally come to the point when no such proving is necessary we will see progress.

Question 4: Should there be special tools for women?

My Comment: Tools are not machines and should not be so confused. A tool relies and a human hand to provide the energy and direction to expedite work through an implement so directed. Machines substitute for this human element and were designed to replace and negate the need for dextrous skill.

Many hand tools already exist for women to use. Generally, tools are made in varying sizes and can be adapted and matched for anyone, man or woman, to use without any compromise. For instance, a #4 Stanley hand plane is as well suited to women as to men. So too all chisels, saws and most other tools. In today’s age, the physiological, psychological and sociological disparity once common between men and women has drastically narrowed in a variety of ways and for a variety of reasons not the least of which is that jobs and work are no longer gender specific.

Question 5: Should there be special projects for women?

My comment: The projects may well need to vary for many reasons. We constantly face to physiological and psychological differences that are very gender specific of course and therefore things may need to have differentiation.

Answer 5: Yes and no. I think developmental projects and exercises need be no different, but then I think there are projects women like more than men for whatever reason. Men generally like boxes, whereas women really “love” boxes. That makes a difference and this often translates into other areas too. I have never heard a woman say I would love to build a guitar, but I have heard hundreds of men say it. On the other hand I have heard an equal amount of women say they would like to master carpentry skills for working around the home and men say it about the same.

5 thoughts on “Woodworking for men or women?”