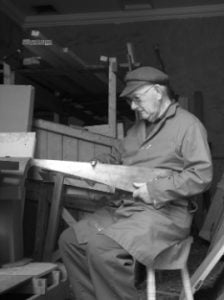 A challenge I face in my daily work writing, teaching and making films is dismantling how people perceive their skill levels and understanding. A man who works wood for 30 years by machine cannot perceive himself to be a rank amateur and a 13 year old girl who made a dovetail by hand claims a maturity in her work whereby she perceives herself to be an expert even though she cut only one dovetail and never touched a tool again.

Visitors watch me as I work at the bench 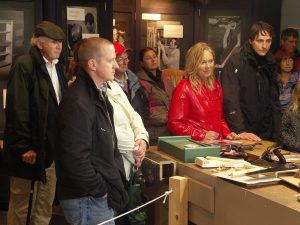 Of course it’s not my place to harm what might be enthusiasm, but countering cultural falsities can be the best thing that happens to them. This week IO spent much of my time sharpening saws and redefining hands saw handles. The old neglected saws have good steel, good wood and can be had for a few pennies at flea markets and car boots. I usually pick up two or three each week. I can guarantee that two or three men will come through and watch me and tell me how wise they were when they “Got rid of those old things and bought throwaways years ago.” Truth is they never discovered proper sharpening and never mastered skill that produced predictable outcome. I sharpened and restored ten tenon saws and four handsaws in quick succession press-ganging my students to try them each time. Shocked at what was achieved they were inspired to try the same themselves. I couldn’t persuade the ‘experts’ passing through to do the same because they already believed they knew everything. They couldn’t for the life of them anticipate that I had anything to offer them. Most young people that cut their one dovetail were told how masterful they were and the machine woodworker thought that in the evolution of woodworking the machine reigned superior. Perhaps I too suffer the same delusion of knowing all, I don’t know. 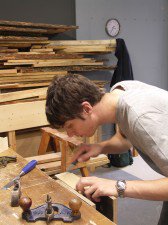 John’s work is getting more precise

It’s a strange thing this dumbing down of skill and knowledge. People pass through my workshop everyday telling me about chair bodging, sourcing locally grown woods and how craft trades are coming back. All they know is what the BBC tells them in some documentary. Sad really that we live in more a knowledge culture perceived by watching that leads us to believe we know more than we do when we could be living in a working culture where we understand by doing. What matters in the woodshop has more depth than the illusion of knowledge through documentary and entertainment channels. Young people need more for their future and so do older ones need the same wisdom too.

2 thoughts on “Self assessment”