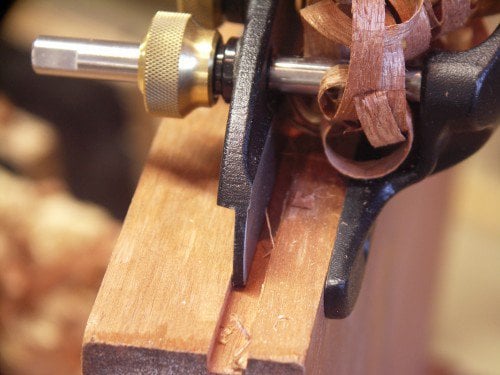 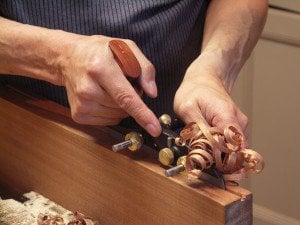 Here is another revue on a Veritas product I like. The Veritas plough (plow) plane has become my favourite plane for developing grooves to form doors and framed panels as well as inlaying grooves for inlaid stripes in boxes, picture frames and so on. 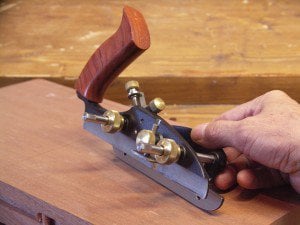 This plane effectively replaces a couple of planes once produced by Record tools back in the 1950’s here in the UK. I really liked the Record planes too, but they stopped production and they have never returned to production since. 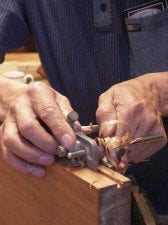 The old Record planes were nickel-plated or painted the traditional Record blue of old and depending on whether you owned the No 050 or the 043 had a series of cutters ranging from 5 to 10. The 043 was the lesser model in that it had no handle, a smaller more compact superstructure and no mechanical adjustment. The 050 had full adjustment depth control like the Veritas plough and a full-sized cast metal grip as part of the body continuum. None the less, the 043 is a vibration free compact grooving plane that never falters in the cut and reduces a channel in any wood in much less time than you could ever set up a machine router to get your groove with.

My apprentice, John Winter, used the Veritas to groove the frames for his new tool box quite successfully in a few minutes. The frames shown here are mortise and tenoned and the internal groove receives the raised panels in those grooves. 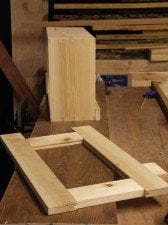 I can recommend this plane as finely crafted as it is. It follows the same standards you can always expect from Veritas and Lee Valley Tools and the wooden handle is super-comfortable and absorbs vibration I often feel when using the old Record 050 to give a really solid feel throughout any grooving operation. Costs vary according to outlet but this is a lifetime plane and should be bought with that in mind. Most of my planes of my youth cost me a week’s wage and I am still using them almost 50 years later on so I recommend this much more competitively priced product even though it may cost you a couple of days wages.

Here is a transitional photo from 1800s wooden plough through to date.

Never underestimate the old wooden ploughs. They too cut fast, deep and with power. I still use this one for some of my work. 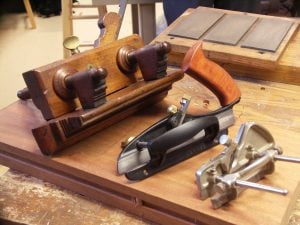