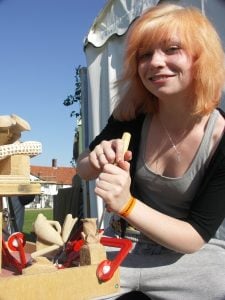 In filming interviews with and talking to skilled workmen and women, I framed some questions surrounding future generations of young emerging artisans. It was evident at the European Woodworking Show that there were actually no trainees there. I talked to one young lady who was carving a rose in some lime (bass) wood. Her mother was a wood carver and this young woman was taking steps toward creating her first workpiece. I talked with her and though we enjoyed our conversation I didn’t sense that she was pursuing a future career, but I also believe that exposure such as this is how some people sense their early vocational calling. 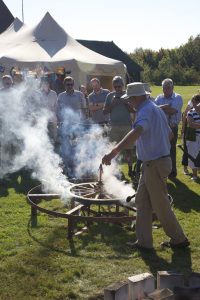 Talking to Jon Tiplady the wheelwright I discovered that some years ago he had become a wheelwright through the willingness of a retiring wheelwright to pass on the skills in his final year before retiring. Jon has worked six years building wheels seven days a week and has more work than he needs. He needs help in some of his work and would willingly train a trainee. 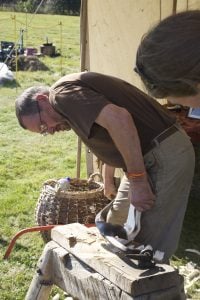 Hard to imagine anyone could still make a living from making clogs but here again there is much work and yet there is no ensuing clog maker to learn from him. This work is highly skilled and intuitive workmen shape the form with minimal tools and equipment. With only a handful of clog makers now making clogs his craft could easily die with him. 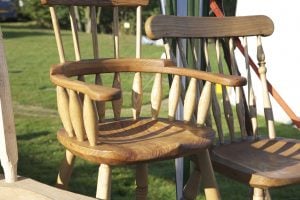 Paul Hayden works making post-and-rung and Windsor-style chairs using a spring pole lathe. He’s fast and accurate and can make chairs readily with a handful of tools. I know that Paul Teaches and also has trained young people. This is admirable considering the opposing forces that counter willingness. 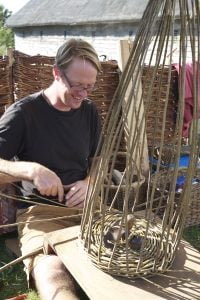 Peter Dibble gave me a great filming interview about training young people. It is hard to find young people to train and he would be willing if the right person came along. As a basket maker growing his own willow and his experience making baskets for over 16 years he is more than capable of teaching and training.

I think that one of the most important things is that these craftsmen never try to teach in colleges and universities, but in their own real life situations as workers in the field.

A thread that came through each interview was that every one of the craftsmen was willing to teach his craft. The great hindrance to all of them was financial. Most people, parents and teachers and so on, seldom see that when a craftsman takes on an apprentice the craftsman is for some extended period 50% efficient. The apprentice rarely has any productive value for the first few months and can never compensate for the committed workman’s work in quality or quantity.

Why we expect any craftsman to take on the burden of an apprentice alone, that is the financial and mentoring burden, without the same financial support parents give to their children going to university. This would indeed relieve the burden for craftsmen.

I could give you more, but this is already too long.