Over the past few months I have purchased many rarities on eBay. Tools such as my I Sorby 5 ½ plane… 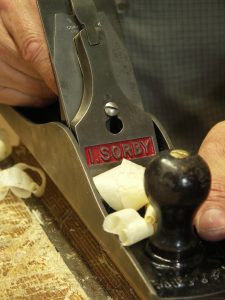 …my 4 ½ Woden and many others. Looking at the tools I find they often seem quite ordinary on the pages, but knowing some history and handling them in daily work often reveals remarkable creativity in those who made them. I left many of my hand tools in the US so that when I return to teach I have good tools to use. One such tool is one I have owned for several decades made by Stanley, the Stanley 5061. Hard to imagine paying a scant £4 for a treasure like this one but indeed it is the best design of marking gauge I have used for several reasons not the least of which is the trailing pin that traces the parallel lines within the total view of the user, a luxury seldom possible with pin-type gauges.

I will post pictures of the 5061 in use later this week. I would that some tool maker would make it, but the trailing pin feature can be easily created in an existing gauge which I will post tomorrow.