With all the ridiculous talk of our biggest UK apprenticing provider being a massive supermarket chain you can begin to realise the problem we craftsmen are up against when people are hardwired to think stacking shelves and recycling the boxes tidily even merits the use of the title let alone provide the substantial apprenticeship it takes to become as skilled as an artisan maker. 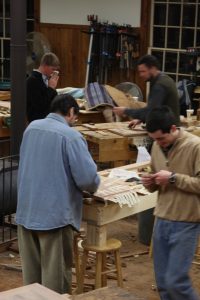 Apprenticeship must be recognised fully as a system of training new generation of practitioners in skilled work. Apprentices (or in early modern usage “prentices”) train as disciples in trade to build their career based on the skill and knowledge they gain through working with skilled men and women, which at one time depended on the craft as most trade apprenticeships were given to men only. Most training in the past was achieved through young trainees working for the employer directly or the working artisans who worked for the owner of the workshop. The system worked well when an apprentice worked under several men and served them by helping alongside them and gradually gaining the working knowledge of work in hand which helps the apprentices learn their trade. The exchange of labour at work creates a sphere of learning that, with the right trainers, nurtures growth and inspires food workmanship. Continuing labour for an agreed period after they become skilled ensures that in the longterm the master reaps some benefit from him passing on his skill. An apprentice wanted the work by which he could earn his living, but today many such systems would collapse because the reality is that most apprentices want only the training and in actuality the owner of the company ends up training his own competition, which could of course put him out of business in the long run.

Theoretical education may also be involved, informally via the workplace and/or by attending vocational school while still being paid by the employer. Unfortunately, here at my local college I was talking to a member of staff about training young apprentices. I asked him what happened in the trade school. He commented, “Well, the schools locally serve to filter out that that can make it academically and go on to higher education and those that will not. They direct the s–t to us and we work with the s–t! This is what the man genuinely believed because it was in fact a reality that trade school for 6 decades is where the “thick” ones are sent to by way of channelling. How we change this mentality I don;t know because a local retired joinery teacher from the same college who worked there 3 decades ago and none of this in his heart. He invested in the young people who went to the college and even now still wanted to invest in that he brought ten saws to the New Legacy School of Woodworking so that his tools could continue to be used by students.

Like everything else in our modern world, substantive skill has been dumbed down to intolerable levels and much if this occurred when we handed over craft education to a system that set itself up as the expert authority outside of the traditional guilds. Unfortunately the guilds to in many cases were equally subjected to corrupted oversight. Reversing trends often meets stiff opposition from many spheres because it challenges the status quo and non-conformity is seen as a form of rebellion, but we working craftsmen have a responsibility to work out ways to make certain our craft stays vibrant, creative and alive and I am not just talking about woodworkers fitting plastic windows and doors or working with MDF and fibreboards made for machine either. Its skilled workmanship and mentoring that protects our craft and deposits it into the hearts and minds of upcoming craftsmen and women. This is what I am talking about. It’s respect for young people and respect for older people who can both carry this forward.