What kind of plane creates this? 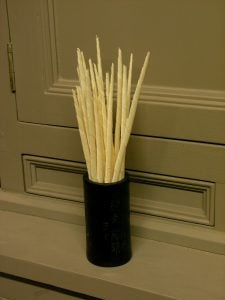 It was advertised on eBay last week as a toothing plane, which any woodworker worth half his or her salt will know that it’s not. These planes were fairly common in joiner’s tool boxes at one time , but as their use became redundant, they gradually disappeared from most woodworker’s tool box, yet at one time this plane was an essential piece of equipment.

To add further to the bemusement, this plane had nothing to do with the finished wood but the shaving itself. This is the only plane developed to actually produce a shaving as the end result. All other planes were developed to remove wood and form something in the main body of wood being planed. 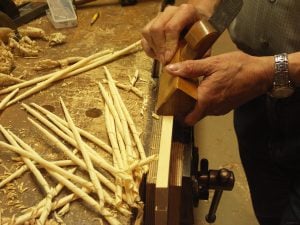 The plane was called a spill or taper plane and was used to make spills which were tight cones of wood formed by each swiping stroke of the plane. The angle of the blade in relation to the sole compresses the shaving and unites the long edge in a continuous spiral that can be glued and used to make a perfect wooden straw.

The shaving that spilled from from the plane to the benchtop was rigid enough to take a light from the fire to light the candle or a pipe. Hence the name ‘spill’ plane.

3 thoughts on “Yet another rarer find on eBay”