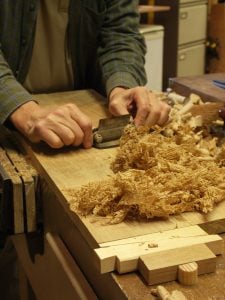 Wood rewards the artisan who works its substance honestly to make his living. You may not grow rich from a life working wood, but then who said you were supposed to. As a lifestyle workman, my life has always meant steady, hard work. Often for prolonged periods and often the work has been tedious and well underpaid, but my lifestyle was chosen and I have nothing but thankfulness for it, even for the hard times that moulded my character.

I have seen a culture shift take place that has negated the rights of young people to find productive work, which has in turn undermined their confidence in education and political constructs and rightly so. Mismanaged lives through politics and education, one and the same, have left the next generation in despair in similar fashion that the 1960s did when movements reached a crescendo in marches protesting the unfairness of that age.

I worked on my front panel of the Hope Chest today, in between a few interruptions with the telephone, radio station interviews and emails about the North of England Woodworking Show this coming weekend. You might be surprised by my findings today. Instead of using a panel-raising plane, a highly specialised and very expensive plane if you can get hold of one, I used a series of ordinary bench planes. Firstly I planed the surfaces flat, which took only a few minutes. I dealt with wiry grain with a #80 scraper, but mostly the #5 ½ bench plane. I soon had the panel dead flat, which it must be before the bevel is formed because otherwise the bevels will not come out straight.

With the board flat I used a marking gauge to mark the limit of the bevel at 3/8” and ran the gauge line around the edge of the board. I then set the distance for the bevel on the face of the board and I was ready for removing shavings down to these lines. 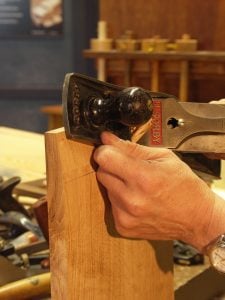 I wanted to see which plane or planes worked best for the task and so I experimented with just about anything that had an iron in it. My I Sorby 5 1/2 faired very well and gave me nice clean cuts, especially across the end grain bevels. The Stanley #5 struggled a bit because the width was so near to the width of the bevel and also because it was difficult to balance on the cut. 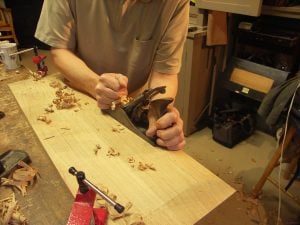 The Stanley #4 had the same problem but I used the one I use with the cambered iron and it hogged off the wood very well. Bevel up Veritas planes were too fine and seemed heavy, slow and sluggish in the early stages and didn’t fair well at all on long-grain cuts. 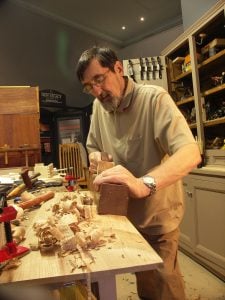 Now when it came to long grain cuts none compared to the 22″ wooden jointer plane. It was unstoppable, even in wild grain and left the least tear-out of all. I have to say that it was amazingly fast and very efficient and gave the cleanest most precise cuts of all. This plane skimmed across the wood weightlessly even though its bulk was so much bigger than the others.

So here now are my findings:

For the cross-grain bevel my I Sorby worked best and I am certain a Stanley or Record #5 1/2 would work equally well. I felt I had good control of the tool and the work. It did work quite well along the grain at the awkward angle, but not as well as across the grain. The bevel-up Veritas planes worked well across the grain too, but I found that the throat clogged a little more easily. Now on the long grain, because the oak is not particularly straight grained, the grain tore intermittently and tear-out was quite dramatic, which is typical of all bevel-up planes when they meet converse grain, but I have more on this shortly.

Now I am very used to wooden-bodied planes, so reaching for my larger jointer I felt a certainty it was more than equal to the task, even in oak, and that proved to be the case. In two minutes the 30″ long bevel was fully and evenly formed, dealing admirably with any converse or reverse grain with little more than a hiccup and with very shallow and minor levels of tear-out, which proved yet again my theory that bevel-down planes are more valid for general planing than bevel-up planes.

Now let me look at something on the bevel-up planes: 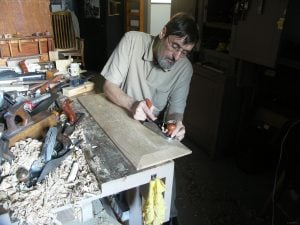 Here I am finessing the bevels with the new Veritas small smoothing plane, which I now love and pull from the cupboard every day.

Having raised my panels with the wooden bodied and the metal cast planes I set the bevel up planes to a superfine surface cut with a narrowly set mouth. I then refined the cuts to perfection and that is when these planes really came into their own.

Here I am fitting the raised panel into the front frame 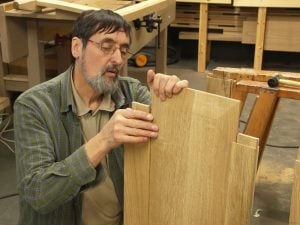 At the end of the tests, all planes performed to their optimal level provided they were used within their limited spheres, proving yet again my call that planes, as with saws, spokeshaves, scrapers and others, there is no such thing as a one size-fits-all plane. How great is that that that we can step back three hundred and more years to high-tech planes of their day and find that they, alongside their modern-day counterparts are just as valid for our use today. 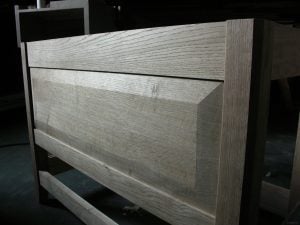 I liked my last pictures of the day. My reward is seeing the harmony of the parts fitly framed together with each part playing its part accordingly and in one accord.