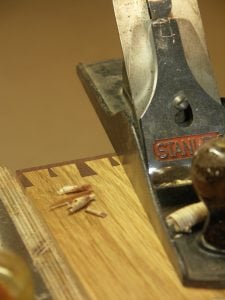 Some of the blogs I have put up are a little controversial – weights of plane, flatness of soles, micro-bevel sharpening, plane chatter and so on. I may seem controversial in this, but my goal is to cause question as to why we do some things and strive to see if what we do is balanced and complete. I suggest heavy planes can be much harder to use in many ways, especially for people of lighter stature with a small frame, less upper body weight, strength and so on. Even a #4 smoother of the heavy brigade is often too heavy for them, whereas a plain old (not new) #4 Stanley with no retrofitted parts will be exactly what they need. So too planes with dead flat soles. My students find a well worn Stanley or Record in the #4 sizes much easier to use than heavier, well engineered planes. But, there is a need for both. It’s unfortunate that for years we threw the baby out with the bathwater, especially as the cheaper secondhand planes have so much to offer.

When you go to woodworking shows and salesmen are selling planes they take specific wood types to work with and they spend most of their time sharpening the irons so that the cutting edges are pristine. Naturally. What they are proving is that the plane can do what it does if the plane is set up and sharpened well and you plane the right wood. I think that that is a positive thing because it equips someone perhaps new to woodworking to take away a fully adjusted plane and eliminates the steps necessary to restore a plane to working condition without the working knowledge to do that. What they cannot give in so brief an encounter is skill. That must be developed by exercise through rote practice. They simply present you with a product able to perform straight from the box. 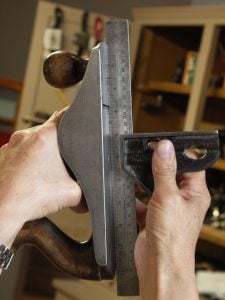 People never consider a well-worn Stanley or Record to be of great value because they are told that the sole is not dead flat. Planing with dead flat soles is often an issue for me, which is why most of the time I reach for my 45 year old Stanley #4 1/2. The sole on this plane is quite rounded at the crucial areas. Because it is not dead flat from end to end and side-corner to side-corner, I can use it on frames and rims and junctions where interconnecting areas of my work need levelling. This task is much more difficult with some of the modern planes regardless of maker or continent.What I am describing is more the common issue and not a 1 1/2″ wide hard maple billet 18″ long and held in a vise at a woodworking show. Does this all mean we shouldn’t buy modern planes? Of course not. Over the years I have been privileged to own and use many types of truly well engineered planes, made by the best planemakers, but my Stanley with no retrofit still tops the bill. Now when I am striving for a very specific need on an equally needful job I could not use my Stanley, but that’s the rarity not the norm. 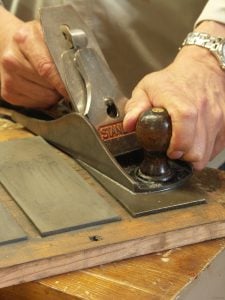 So, on my plane sole I allow the natural wear to the outer edges to remain and flatten the inner surface along the length and width periodically. In other words, I like not to get the sole flatness across the whole but let the sole feather up from true flatness about 3/8″ (10mm) from the long edges and about the same from the ends. That way, when I plane forward the fore part of the plane temporarily rides unevenness until the cutting iron levels the surface more. When I pull back to prepare for a forward thrust the heel of the plane does the same.

Older planes that have been used for more than say five years already have these areas worn down and that’s why they generally work with such ease. Flattening the sole to create straightness need only be for the majority of the width and length and not as I said, toe to heel and corner to corner. 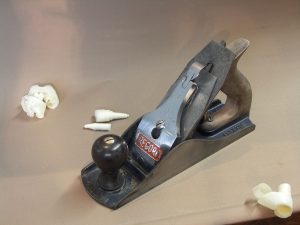 I don’t need to prove the contrast between single-bevel and secondary- (micro) bevel sharpening. Both methods work fine, but I have found one to work better than the other, especially for chopping mortises and a such, but also on my plane irons and spokeshaves. I find that woodworkers never consider a temporary, steep secondary bevel as a technique adjustment for say chopping mortises or chiselling in knotted areas and such. Because I use only one type of chisel for all of my work I work my chisel a fraction differently. Though I find 30-degree convex bevels the most efficient for my general paring and most chopping work, when I work on some pines I increase the bevel by 5-degrees to increase the strength. Pine often has very hard aspects to the growth ring and the softer adjacent aspect offers no resistance. This can lead to edge fracture when heavy chopping is needed or knots are in the mortise. Increasing the steepness for a short distance is a temporary fix and is a matter of two strokes on the stones, a quick polish on the strop and on with the job. This is a method that I like, especially as I rarely need to use mortise chisels for most of my work, which is lighter than making entry way doors and such.

The reason I raise these and many other issues is because we lost the value in what was already readily accessible and available. Many things that I pass on will perhaps die with me or at least my generation. I consider myself to be in that generation raised with hand planes and hand tools in general as a lifelong working craftsman and so I bring that perspective to the table here, before I go.

1 thought on “Finding the balance”