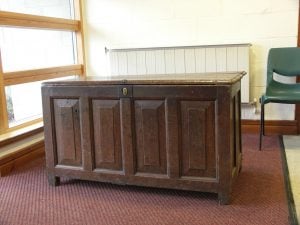 I recall a time when a chest over 200 years old made from solid oak by the hands of a craftsman would have been revered as an example of the work of our forebears, attesting to the quality of their work, the wood they used and the value they knew in both. Not so today. This chest in the foyer of a Welsh school is the home of empty Coke cans and waste paper and the mortise and tenon joints connecting the corners are impressed not with admiring glances from students but chewing gum of every changing colour marking the generational changes through the decades. I try for a moment to imagine a chest made by IKEA lasting more than a few days with the harsh treatment this chest has withstood from the students through the decades, but then I stop myself.

Putting myself in the place of the maker for a moment enables me to envision many things as I rehearse making the joints, raising the fielded panels and driving the pins that draw up the mortise and tenon joint shoulders. The chest is bruised and battered now and of course it would be. But at one time the surfaces would have been as pristine as those in my Hope Chest and each joint carefully formed and fitted would have come from the cutting edge of a chisel or plane; tools I use today that remain unchanged for hundreds of years. It has been converted in parts and there are telltale changes that show it once held a place for coffers to be held. Locks have changed from wooden cases to brass and now steel through the years too. Notice the two-keyed lock for a two party access only.

But the most amazing thing in this as in most old chests of its type is this – the mortise and tenon joints held with draw-bore pins remain in tact and with no sign of deterioration; attesting to the real value of this incredible joint.

Ribbons of riven oak show the medullary rays in most of the pieces. Riving was of course commonplace back then as a carpenter would cut his sections in the round to appropriate  lengths and then rive from the round the billets radiating from the centre to the outer with each split and than stacking to air-dry for what ever season necessary. 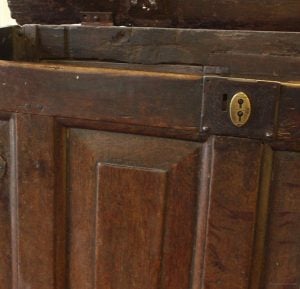 How many of you know that before the invention of screw-threaded clamps craftsmen had little need of them for clamping frames together? The draw bore method resolved this most adequately. Twin pinned, the shoulders remain unchanged for two centuries at least and the chests had many different uses, primarily to store food, seed, cloth, tools, equipment for specific crafts and of course valuables in which case the chest would have been called a coffer. The root word of coffer is old French for ‘cofre’ “a chest and is also the root for coffin and coffin was the same word and meaning a coffer as in storage things of great value. 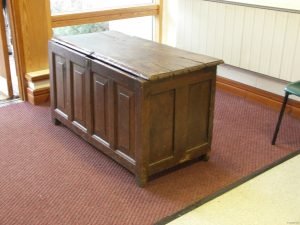 A coffer is a stoutly made box or chest usually made from a dense hardwood such as oak. In times past these chests were used to contain valuables or a treasury of funds, but they were also used to store important or valuable documents such as deeds, marriage documents, bonds and such like.

I am sorry to say that the custodian of the school told me that kids sit on it during break with no care or concern for its antiquity.