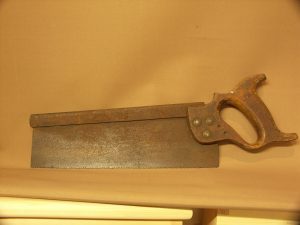 Well, this one was a challenge but I did it for you.

John Elsworth was a well known maker in his day, late 1800s early 1900s, and made good saws, of that there is no doubt. He had a an established reputation earned for the thinness of his steel and the comfort of his handles. He earned his reputation. Modern day makers rarely have that. The reputation is really a result of someone else. I remember an American maker of recent years who made a saw called the Independence saw. That owner earned his name as one of the best saw makers of his day. Bob Wenzlof of Wenzlof saws did the same. Makers like Thomas Flynn simply bought up all the names of sawmakers of old and added them t their list of names. They then made saws under different brand names of old and never actually earner=d their reputation. Fact is that they rarely make trull good saws that match the Independence or the Wenzloff’s. 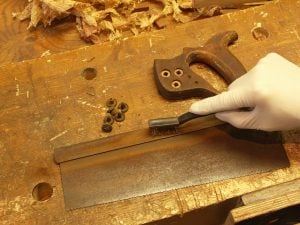 Here is a very ugly looking Elsworth. The teeth are the worst I have ever seen or at least close to. My first task is to remove the rust. This rarely takes more than about ten minutes with #120-grit paper followed by #250 and then #600. Any surface rust would have already killed any engraving so I didn’t need to worry about that in this case because of the severity of the rust.

I find it best to dismantle the saw when I can; so I can to the rust right in the corners. 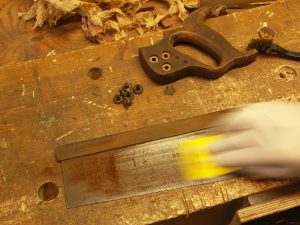 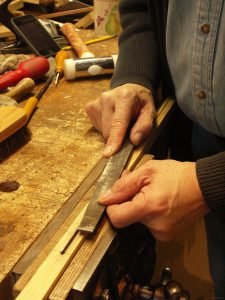 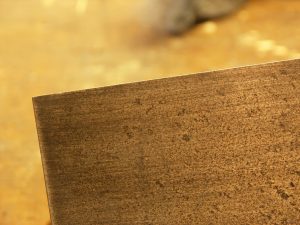 With all the rust removed I can now focus on the teeth. When the teeth are so badly uneven (sergeants and sappers) I generally remove all of the teeth right down to flat using a single mill flat file. This only takes a couple of minutes usually, but they must be removed completely. 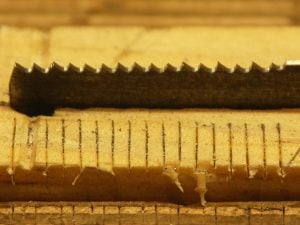 I clamp the saw in the saw chocks and in the vise and mark increments onto the chocks with a knife as shown here. This gives me a guide as to spacing. On a 12” tenon saw, I like 16 ppi, which is a good sized tooth that is readily sharpenable. Anything less is hard to sharpen because of size, depending on the thickness of the steel; the thinner the steel the more likely you are to file out two teeth in one swipe. Increments in standard imperial are in 1/16” increments so that’s an easy one. 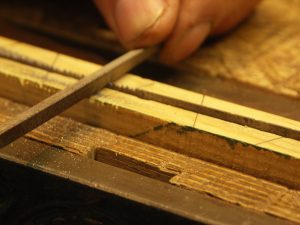 I now line up the file with each increment and take three or four swipes to establish the vee. I move along to each increment, keeping the line to my right and moving the file with each stroke to the line on the chock. At this point I am not so bothered about depth but more evenness. Bright spots on the edge mean that I haven’t yet reached the full depth, but after doing a couple of inches I go back and take consistent swipes evening out my discrepancies. Don’t worry. It works.

With all of the ‘V’ shapes along the length of the saw I can now settle the height by closely monitoring my pressure across the length of each stroke and keeping a rhythmic sequence to the strokes. It takes me about ten minutes to do a recut like this and then 5 minutes for final shaping, sizing and sharpening. 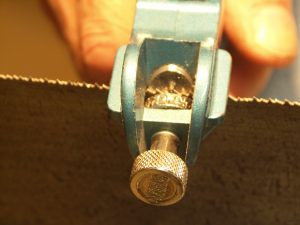 With the teeth cut, it’s simply a question of setting with pistol-grip sawset. I never use a set more than #12 on any of my saws. Sometimes even this is too much so I put a hammer in the vise and remove some of the set by tapping the teeth with a second hammer, using the other hammer face as a small vise. 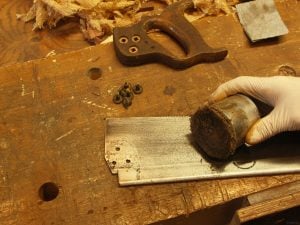 Raw steel, freshly sanded should not be left to the elements. It readily rerusts so coat it with oil. As you use the saw it will take oils from the wood and your skins and will stop rusting the more you use it. My used saws never rust. My oiler is a 4-oz can with a rolled up cloth wedged tightly and evenly inside and soaked in light machine oil. 3-1 oil is fine. This puts exactly the right amount of oil on the steel. 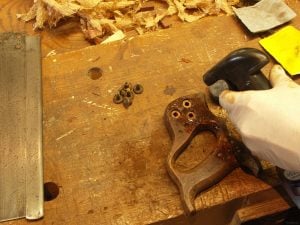 On the handle I use glass cleaner. Not window washer or window cleaner but Glass Cleaner. This will remove the dirt and grime but leave the patina, and once all dirt is removed a simple brushing with a shoeshine brush restores the lustre. 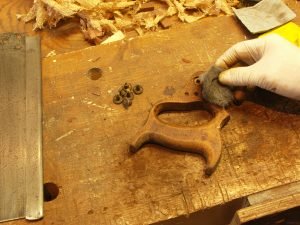 Use 0000 fine steel wool with the glass cleaner to remove the dirt. 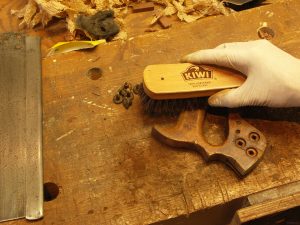 I use a Kiw shoeshine brush to polish out the finish. 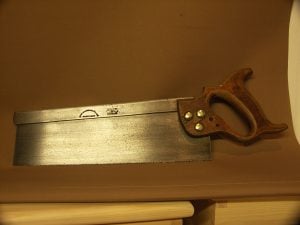 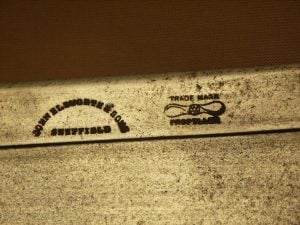 This is how the finished saw looks replete with the original maker’s name visible again on the spine again.

17 thoughts on “Saw beyond restoration”