Second day of class and what we did 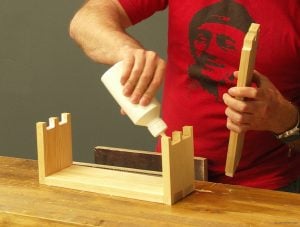 The second day of the class went well despite the fact that what I thought was the tail end of congestion was to worsen over night. Nothing stopped us though and by the end of the day we accomplished many things not the least of which was every box glued up and resting in the clamps and vises. 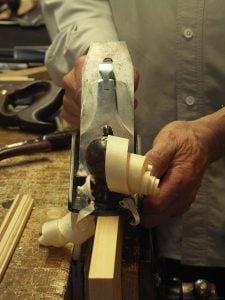 We went over bench planes and planing quite thoroughly so that they would at least know these strange contraptions do work and work well when they are sharpened and set properly and in the right hands. Discussing contrasts between makes, types and makers doesn’t always help, but with everyone saying the only one to buy is this or that maker, I am afraid we would lose more woodworkers in the confusion of biased opinion and pluralist choices than we would gain. 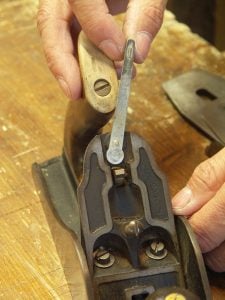 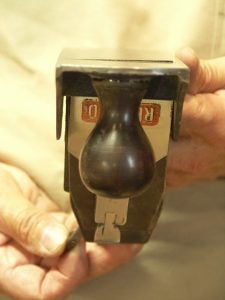 We focussed on the most standard of all smoothing planes because that is the one bench plane in the bench plane category that will serve them the best and one that they will use forever right from the get go. If you can master a Bailey-pattern #4 bench plane you can master all planes, but that is not because it’s a bucking bronco but because it addresses just about all aspects of restoring, fettling, setting, sharpening and micro-adjusting a bench plane regardless of maker, shape or size. 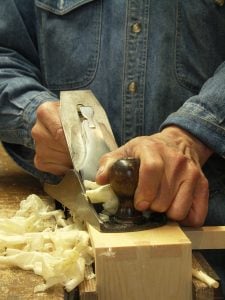 By the end of the day we had everyone planing surfaces and gaining some truly relational knowledge about the bench plane. These skills are all transferrable and interchangeably used between the bench plane range of planes and so they become increasingly important to match. 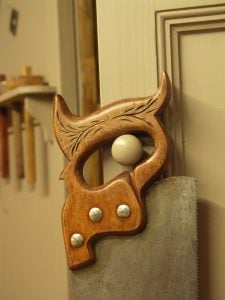 Today I will be going over sharpening saws. That’s a concept that looks easy but can be difficult to convey on the one hand and understand beyond what we think we perceive on the other. It’s a good idea to buy a saw that works from the box but it’s an unfortunate thing that most saws from the British stables actually don’t. The reason for this is not the steel, not the brass backs or even the handles, but shoddy output and poor workmanship. No British maker would have put their name on poor quality saws when there were twenty or thirty other makers from the same town competing for business. But it wasn’t just that either. They cared about their product and set standards. Standards during the war years were dropped. The handles were unrefined and the steel less finished. This then carried over into the post war years and quality expected by pre-war woodworkers was reneged on and post-war woodworkers became inured to poorer standards and products. The once well know makers never reverted back to producing quality tools again. It’s a sad fact but a true one. Even a finely made saw takes only a few minutes to of manpower to make one. The steel plate comes on a roll and so too the brass back in lengths. That means that they are simply cut to length and inserted into the brass back. A laser engraver engraves the names in seconds per unit. The part that takes the most manpower is usually the handle and of course these are turned on commercial lathes and spat out by the dozens every hour or CNC routed and not man made anymore as in the early days of the old Disston saws, Atkinson, Spear and Jackson and many, many more. 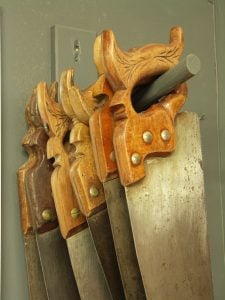 Three things affect the cutting qualities of a saw the most. Tooth shape, amount of and quality of set and saw thickness. Britain has pumped out hundreds of thousands of saws for many decades with faulty standards of manufacture in each of these key areas. There came a point when no one knew what the standard was any more and so people living on the continent buying the most of these products, North America, started to manufacture their own high-standard saws and a one-man band back in the 70’s that made the first Independence dovetail saw took the prize for the best saws. Bob Wenzloff of Wenzloff saws saw the niche too and set even higher standards and came up with an even wider range of top-notch saws. Amazingly, the man who started the Independence Saw Company really knocked the socks of all saw makers at that time and now we enjoy some of the finest saws ever made coming once again from several North American saw makers who make just about the best Western-style saws in the world. Perhaps one day there will be again a British saw maker caring enough about a quality that will set a standard. In my lifetime the only saws the old timers I worked with ever credited with quality was Henry Disston. Their handsaws are hard to beat. (I am not talking about any Disston saw made in Canada; you don’t want to buy these.) If I do find a British maker producing one comparably good saw I will let you know.

5 thoughts on “Second day of class”