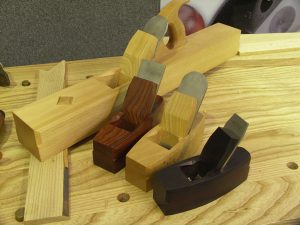 A bevy of planes made by Phil Edwards

I have told you that all metal planes bend and can be flexed in use. It’s only a thousandth on a jack plane but much more possible on long planes. We have grown accustomed to all metal planes even though it took half a century before the old craftsmen extolling their virtues finally died off. Today of course few people have ever experienced the wonders of using wooden planes. I use them often because of their lightness on the wood and the fact that they do glide like swans on the Aber Afon Dwyfor – The estuary of the river Dwyfor. 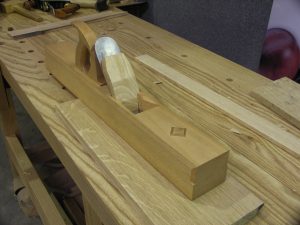 Wooden planes, surprisingly to most, do not bend under the same pressures. They resist all types of pressure last as long as their all-metal usurpers. I don’t really have much time for nostalgia, so this is in no way Paul’s quest to step back in time and shun modernity. I want to remember what we once had and record for memories sake the reality that what once was had real value and if you want a real treat, fix up an old plane or buy a new one from Phil Edwards. The advantage of owning a Philly plane is that when it arrives you can see what I mean straight out of the box. Take a knot free piece of pine or better still some hard maple and slice off a piece of perfection. You will catch a mere glimpse of what once was and stand in awe of what these planes will do.

This is one of my older planes still in use 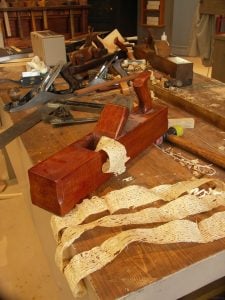 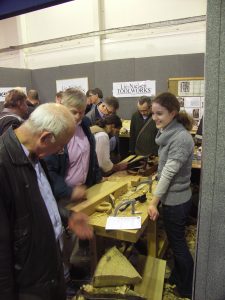 I wanted to show you the planes above because they are both lovely and functional. If you owned one of them, and kept it well set and sharp, you would begin to understand why woodworkers rejected the all-metal planes for so long. It was not that they rejected progress but that they already owned a thoroughbred so well developed that it could not be reproduced using steel and iron and bronze and brass. Though some espouse the British Norris the best plane ever made, few craftsmen accepted it as a better plane than the all wooden ones they were using. I like the Norris smoothing plane, but a wooden one works better. I doubt that most will agree with this, but I have enjoyed wooden planes on and off for almost half a decade. They really are quite, quite lovely!

Below is one of my wooden plough planes. It would be hard to beat this for functionality. 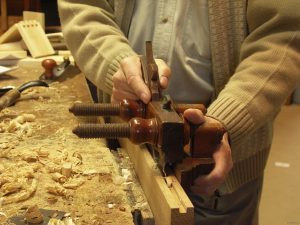 I am glad for wooden plane makers like Phil Edwards and others that have held to the tradition and produce fine planes. There are not many of them. No more than a handful in the world even though there were hundreds of them at one time. These modern makers like Phil must have gone through quite a learning curve I am sure, but they have persevered to preserved for us a legacy we cannot deny. If you have never used a wooden panel-raising plane, I have to say it, you have never lived.

1 thought on “Wooden planes past and present”