Here is a post I did recently and now want to show you how to do it through a short video. This is not the same plane shown below but it is all the same procedure I use for smoothing planes:

Something I have wanted to post on for a while. Next week I will be using a Stanley #4 at the Springfield New Jersey Show and the Fredericksburg Virginia Show Masterclasses I will be teaching for The Woodworking Shows show. It’s an eBay find for £8 – $12. This plane is and always was an amazing tool in and of itself with no retrofits of metal components at all.

Here is my technique for prepping a number four and other Bailey-pattern planes you may own. I hope that this knocks your socks off. No body’s done it before so watch carefully.

First off, how many of you know that you can easily bend most metal-cast planes by merely flexing the handles? This then changes the shape of the sole and many craftsmen I grew up with did this all the time when they were jointing the edges of boards. None of the planes were straight just as many new models made with heavy castings may not remain flat even though factory tested before being shipped. Truth is steel changes according to exchanges of heat and exposure to extreme temperatures is when the greatest change takes shape. Pun intended.

What we aim for is a general goal of flatness and then we work with our planes at a personal and relational level. That’s why it is a rare occurrence to pick up someone else’s plane and feel comfortable with it straight off. Now all of that should help you understand your own plane and the need to develop a thorough and insightful relationship directly through working it.

Following are the steps guaranteed to flatten the sole based on the fact that soles flex with even hand pressure. That is why, when Clifton flattens the soles of their planes they never apply more than 12 pounds of pressure to any part of the plane.

Flattening the sole needs to be done from time to time because they wear in different parts of the sole depending on use and user. This must be

Testing your plane for flex 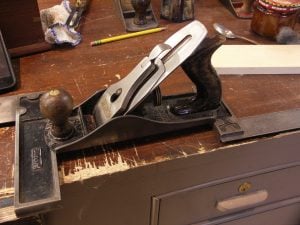 If you want to test your planes flex, here is simple enough test I put together simply to show that they do. Suspend the extreme ends of the plane on two hard, non-compressing surfaces. Here, I am using two steel-stocked squares. 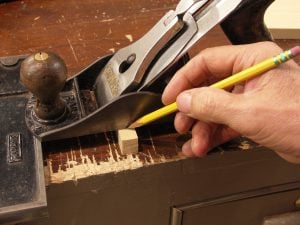 Cut a wedge that tapers shallowly and is wide enough to engage the under edge of the plane as shown. With no pressure, slide the wedge under the plane until you feel engagement and with a sharp pencil make a mark. 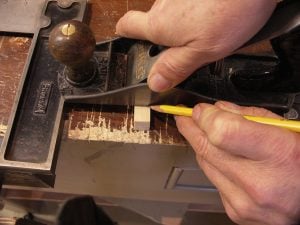 Now, having removed the wedge, press the plane in the centre and slide in the wedge. Now you can see that it doesn’t take a lot of pressure to alter you sole and you will understand why I am emphasizing this key point in both sole flattening and plane use. 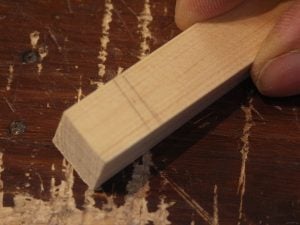 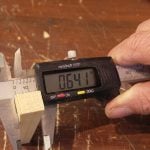 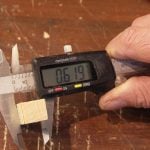 The plane must be fully loaded with the cutting iron assembly and under the same general pressure you use in daily use. This varies from craftsman to craftsman so there is no torque-wrench test to govern you. 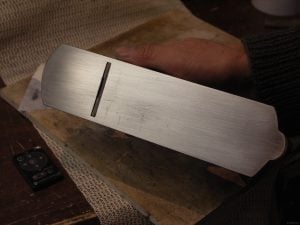 If necessary, clean off the surface of the sole using abrasive paper on a flat plate of thick, float glass or a dead flat tile. Here, I am using 120-grit paper, which is enough for flattening. I also use my diamond plates for this and they work well too as long as they are truly flat. 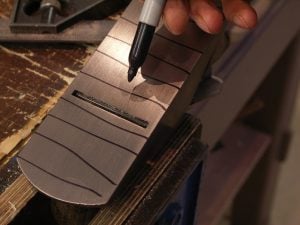 Mark the sole across its width and intermittently along the length with a sharpie and return to the abrasive. 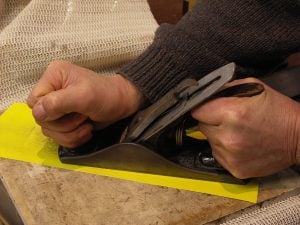 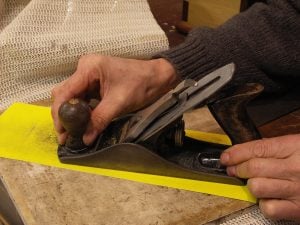 …hold it firmly at the fore part and rear of the sole. You can use the handles, but this must be done sensitively as the extra leverage from the extended handles will readily flex the sole. I learned this years ago when after flattening soles they all somehow seemed to be slightly hollow after checking with a straightedge.

Continue until the lines become so feint you can scarcely see them over the whole width.

Now if you read my earlier post you will know that older planes and new planes work best if the perimeter edge is well worn so that it feathers in to the flat face of the sole. This allows smooth transition over the surfaces of boards being trued and also where two or more adjacent surfaces intersect. The rim of a box or a framed door are good examples.

Here is the new step that gives the Paul Sellers’ ‘glide-slide’ you want in a plane sole. 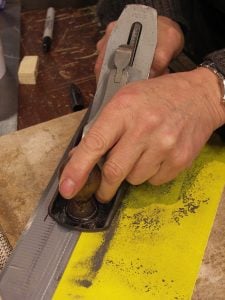 Having flattened the sole as directed, tape a steel rule to the surface of the plate so that the plane’s sole glides on the duck tape and the plane sole is slightly angled into the abrasive paper. Keep the sole corner parallel to the ruler and simply move back and forth about twenty or so times. It’s also handy to remark the sole with the sharpie just to make certain you are working evenly. 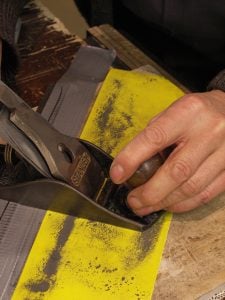 Do the same to the fore end of the sole; Following the arc. 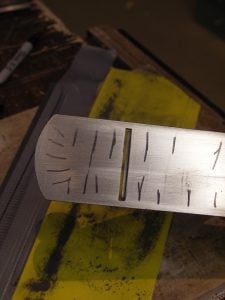 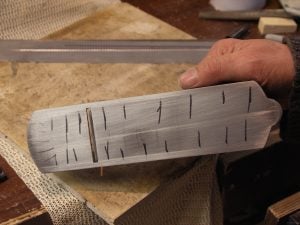 See now how the edges are gently chamfered uniformly. 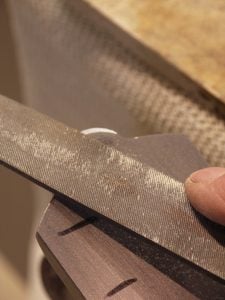 File off the heel of the plane if this has not been done previously. This heel is notorious for damaging the corner edges of work on the reverse stroke of the plane in use. Sand off any unevenness from the file.

If you want to you can use finer grit of #240 to give an overall smoother finish, but this doesn’t add anything to the sole’s flatness.

I use furniture wax after abrading. When the surface is newly opened by abrasion it is highly prone to rusting.

34 thoughts on “Plane soles should be mostly flat”