Here is another view from my workshops at Penrhyn Castle’s New Legacy School of Woodworking on the Saturday before I left for New York. Isn’t it just preciously lovely to see fields of golden daffodils nodding their heads in wind-tossed cluster groups like this? 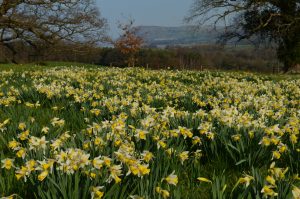 I thought that you would like that. A photo never can do justice to a scene like this really, but even so.

Needless to say I arrived stateside safely after a good flight. Unfortunately security couldn’t cope with the extensive arrivals and transfers and I missed my connection even though I had more than two hours between flights. The alternative flight two hours later was overbooked but I took a standby and it came good because of a no-show so I made it in just fine. My friend Tom met me at Albany and we drove on to Greenwich after dinner at a Macaroni grill in Albany.

After a good night’s rest and easing on through a relaxed morning, I spent the afternoon at the woodshop. More going on here than in the New York Stock Exchange 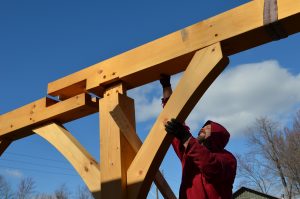 On the outside, very cold in the wind, the guys were raising posts and cross members that form the new porch at the side of the workshop. Mark’s trying to align the long crossties that carry the roof rafters later. The backhoe jib was specially made to help with this and worked just great. It’s a shame that by the time the joints are all together the insides of the joints will never be seen. Nick was busy over the weekend creating this masterpiece of timber framing with a young team of trainees who formed the whole by hand including shaping the arch braces using the notching and spokeshaving methods we use throughout our classes. We have the last bay to tag on tomorrow so I am glad to be around for that. 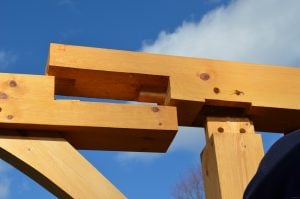 I have always loved to see joints going together like this. The absolute integrity replicated from patterns laid down centuries ago and still practiced in young craftsmen.

Chisels and handsaws chopping and chiselling out mortises and of course we use some modern methods and drills as well. 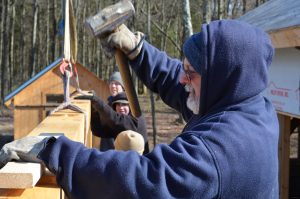 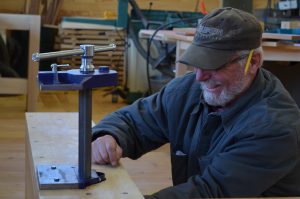 Tom here was fitting a new vice to one of the new benches. The new vises arrive this week and so by next weekend we may have them all in place. I like to see the frames, tops and aprons waiting to be completed. It’s still quite a challenge, but they should all be ready two weeks before our inaugural classes take place mid April.

One thing I’ve grown to appreciate through my more recent years, perhaps a decade or two now, is watching and working with groups of willing team members team-working together. Oh, I can find dozens if not hundreds of individuals working hard alone, that’s not the point. We all know that anyone can do that, no, it’s finding people that can put aside their own aspirations to work on something bigger than just me, me, me. Now that’s the real challenge. 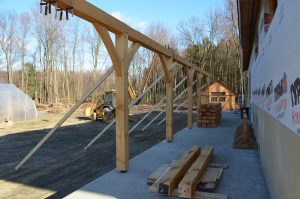 I have worked with many people who talk of being team players and part of a team, but at the end of the day, as long as they are the ones that score, they don’t mind who helps them.

Ask yourself a question I was asking myself this afternoon as I watched my friends working together. Why would young woodworking craftsmen put so much effort into making something this way? Just why would they do that? I will give you the answer to that over the rest of this week. Meanwhile think of the Northeastern Woodworkers Show this coming weekend and be sure to look me and my friends up at the New Legacy New York booth.