The good thing is that you encounter many diverse crafts in one location and often the surrounding streets. Lofty sandstone arches vault four stories above to peak in perfect symmetry – the result of men’s hands chiselling and sawing blocks, carving arches and chiselling leaves and faces by eye. Whether the building itself is Christian or not is for dispute. 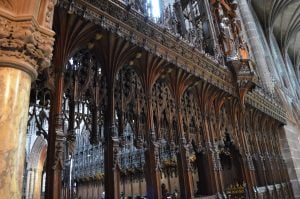 The work of hands is a man’s form of honour and worship. He works within a sphere no other can, decides critically second by second and lives with his results. He twists, heaves, pulls and shoves, grips, twists more and stands back from time to time to look. Imagined shapes in leaves and volutes emerge from unshaped squares in segments of wood hitherto unformed yet and waiting release by the chisel’s edge. Stone stands against wood – hard, soft, different and real.

I looked at the sheer mass of wood, work, symmetry and discover men I never knew by gouge marks and sawn segments pared, planed by hands clasped with knotted sinew and muscled. I reach high by eye, ingest and think of men beyond those cuts and sinews now long gone.

This medallion impressed me with colours I had not seen in glass before. Colours come from metals and these range so widely. 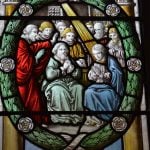 Iron and chromic oxide for greens; reds come from gold chloride and selenium oxide. Blues, lovely blues from coppery compounds and cobalt oxide while yet yellows emerge from from the subtleties of sulfur and cadmium sulfide.

Mosaic in skilled hands imparts a subtlety no other medium has and it takes an eye for colour and shape that reaches beyond puzzlement in defining strides. A flow of texture comes from squares placed exact for colour and texture most men never know. 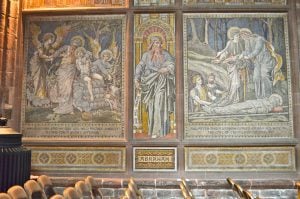 I place the tiles by eye in my mind and wonder how long they took with each perfect piece. The tapestry reaches ten feet high and I scan the expanse in width to see a full field in depth and breadth.

Symmetrical panels express names in coloured contrast exemplary of order yet the tiles are not laid legally in straightness.

Now of doors such as these there is but primitive skill in rough cut boards held tight by well-driven blacksmithed nails wedged and clenched over. 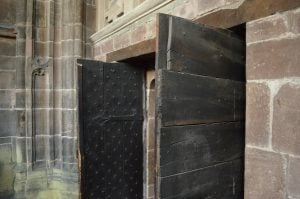 Cleated so, the doors have stood these four hundreds years and in their coarseness kept well the content of this inner vault from which the Bishop of Chester held Consistory Court and protected the Church life of the diocese.

Oak lasts four hundred years and beyond and though I cringe when no joint holds them to the hinge and stonework I cannot deny that they have held their stay against the unwanted.

Metal locks encased by wood last equal to the door’s task of keeping out the wanted from the wanted. There’s a beauty of function in form I cannot see in modern locks from Yale and Centurion, Union, Chubb and others. 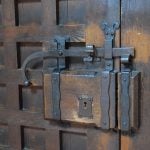 Though less strong than these modern locks, this lock looks its part and holds a presence I find solid and reassuring. How the latch lifts and rests in the cradle and the lock switches from unlocked to locked. A blacksmith hand wrought the rough raw steel between the hammer and the anvil’s horn by eye and hammer blow, I know his work is not so old, but he worked the steel by hand.

Beyond the walls four-storey buildings house the house of fashion known as Next. It’s sad thing to see the work of men used to now keep the frivolous fashions of humanity. Try to find a tap washer or anything useful in Chester City centre and you will be hard pressed to find it. 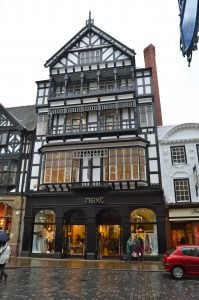 But the buildings stand in wait for a generation that cares and makes changes beyond saving glass bottles and alluminium cans. Imagine a generation that keeps its clothes until they wear thin instead of throwing them to someone else and claiming goodness for recycling. That would turn the greenhouse gases down. Imagine a floor that could be swept with a broom and dustpan and that would last four, no five or six hundred years. That’s what we once had. Now we claim recycling fame to replace the non-waste world we once had before the Great War. 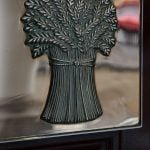 1 thought on “A day in church – Chester cathedral”