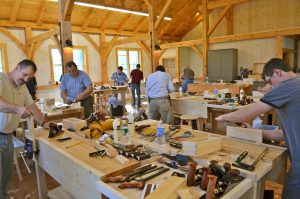 Reflecting on yesterday and the class, I was reminded of the simple importance of being childlike in learning. The ones that gain the most in anything in life are the ones that acknowledge a lack (that’s to themselves and not some public demonstration) and you can see the ones who do. There is something about honest introspection that somehow, in the self-acknowledging admission of it, opens a door to transformation from not being to being, from not knowing to knowing. There’s something in the raw innocence of openness that somehow enables us to learn, train and master. I have seen that over the past two days. Confidence levels have increased markedly. 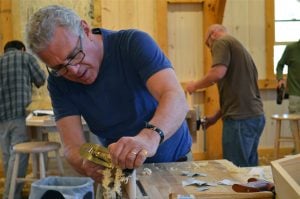 None of them now pick up the plane with hesitancy, buy turn to is as needed with confidence even though they themselves would most likely be the last admit it. I watched William yesterday from my bench and saw the exactness of positioning his plane as he rounded over the edges of the base of his box. Yes, it’s true that the stubbornness of grain sometimes, even often, trips them up, but they unwaveringly renegotiate its course and swipe off the rebellion. Sometimes the plane and wood unite in perfect harmony and the energy this infuses in the plane user doesn’t want to stop planing and then the walls of the box end up thinner than they should be, but oh, what joy!

The boxes were all glued up and the bottoms in place before we closed the doors and made our way home. The workshop had a harmony about it as students shared a commonality of woodworking that always transcends gender, age, prejudices and so on. 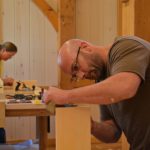 New friendships are being formed at the workbench and I feel that I am in a realm few people find. It’s as if we somehow managed to take down barriers we didn’t know were there on the first day. There’s more laughter, more, well, realness that’s not kept in and hidden but shared with openness. I see this consistently in classes just like this. Struggles and weaknesses were overcome and in that overcoming there was a unitedness that no one can explain. You see, herein lies the difference between learning to master skills and using machines. 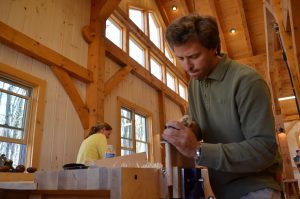 Even a badly made hand-cut dovetail beats a perfectly made machine cut one hands down any day and anyway you slice it. Moreover, none of their dovetails were poorly cut dovetails and for every student here, I think that this is true, these are their first hand cut dovetailed boxes. Perhaps I will post some of them tonight if they agree and I have time.

Let me ask you a question before I go. If I cut a dovetail with a Dewalt router, a Leigh dovetail jig that totally guides and controls the router and Bosch dovetail router bit, would you be impressed if I posted pictures of it? Or, if I used the same router, a different bit and formed a roundover with that equipment wouldn’t you say, “So what?” Now I will ask you is it true that a machine is a tool and a tool a machine? I emphatically say that they are not tools but machines designed for mass construction and mass destruction of skill. The difference then is that some are willing to develop real skill, risk failure and overcome in order to become true artisans skilled with their hands. A machine is not and never will be a tool but a very boring machine.

4 thoughts on “People change with handwork”