Walking, looking, investigating, researching, kneeling, bending, measuring by tape, by rule and by eye, standing back, weighing up, weighing down are all aspects of establishing the work of another workman. Imagine that boat builders made some of these pieces. Not that they are a lesser trade, but that they do prove my reasoning that woodworking spins off into other woodworking crafts from time to time in the same way I made a playing cello with my son Joseph played by a world class principal cellist with the Dallas symphony who said it was “easy to play and hard to put it down.” His primary instrument at that time was a Guanari! That doesn’t make me a violinmaker any more than driving a fast car doesn’t make me a racing driver. 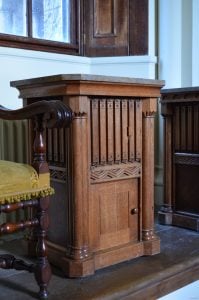 This night stand very much captures the intention of Thomas Hopper to produce furniture equal to the Norman style that seemed so important to the work of Penrhyn Castle. Notice the frieze of triple herringbone zigzagging here and then look back through previous blogs showing images of the outside of the castle where the same feature is carved over entrance ways and window frames from solid stone.

A Luminaire of Fumed Oak

Dogs in carved wood for a lamp stand. This is a luminaire with three dogs set in triangular pattern with each head facing out towards three upturned lights; as you might expect with candle lighting. 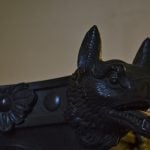 This carving has much movement and imminence of mood in its simple gouge cuts. So many carvings I have seen look, well, wooden. This one doesn’t at all. A very important projection pending defence is captured and expressed by the artist who was never known as an artist in his day. 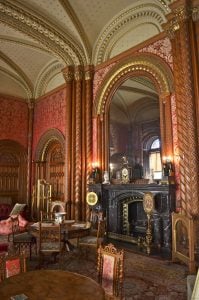 Now what of these oak columns either side of the fireplace that reach 18’ high, projecting through classical transitions into the extremely ornate plaster-ceiling work? United by 45-degree spiral cut carving, the columns are uniquely individual in design even though side by side and beautifully hand formed using only gouge and chisel work. 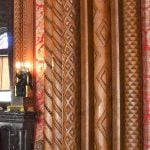 I thought this such innovation for its day and, though perhaps striven for by others, seldom have I seen such harmony attained. Furthermore, try to imagine what it took to worked oak into such clean-cut hand work. We will see more of Hopper’s use of this style variance created in solid stone in a later Penrhyn Castle section where we look at some stonework carved by hand over a ten year span.

Escutcheon covers like this ensured no keyhole spying by staff, house guests and family members, especially in private settings such as bathrooms, bedrooms and so on. 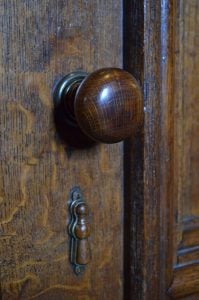 I liked the turned oak knob with its patination from 170 years of gripping hands, but I especially liked the turned oak escutcheons with their split-turned matching oak inserts framed by cast brass. Notice that the oversized base plate parallels the moving outer to form a stepped appearance. I think this a careful thought to add precise detail to the simple feature of a keyhole. Something very much missing in our present day.

Try not to look solely at the door but the arched frame necessary to span two-foot thick, solid stone dividing walls. Now think about that first and then think about 2×4 stud walls with 3/8” sheetrock each side. 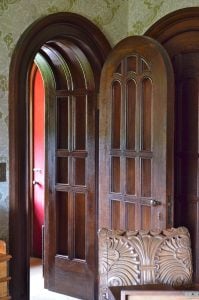 This doorway exemplifies the fine skills of the joiner from an age when such quality defied the age of the machine. This joiner worked at a pine joiner’s workbench hand planing English or possibly Welsh oak in preparation for cutting and shaping joints with shoulder lines so perfect the arched joint-lines are barely discernible. The arched head of the door and the framed frame is replicated in the triple arches that are just lovely. The reason all of this is so lovely is because it was made by a man who loved his work.

The chair back is hand carved and presents something of a nautical theme almost like a seahorse. I don’t care for the carving itself, my opinion only, but the work is exemplary of the craftsman’s skill and no one can deny that it has quality. This carving is not complex at all.

In my next session we look at the bedroom where the slate bed developed for Queen Victoria to sleep in. This is a remarkable room