I thought that this questioner might answer some questions for others. Up front I should say that these are my views and I am sure that others have theirs. I don’t think that mine are difinitive and I will say that we should look at the issues as woodworkers open to change.

Thanks again for a wonderful bench building video. I had a vise question. Veritas has a twin screw vise with 24″ between the screws that I’ve heard is great for hand made dovetails on pieces like hope/blanket chest. Do you see this as a useful feature?  I like watching you work with the steel quick release vise and was thinking of installing the twin screw on the front/face of the bench and a quick release on the end.

P.S. any thoughts as to dog holes or dogs? (Not the cute furry kind. LOL)

This really is  a matter of personal preference. I have used wide twin-screw vises from time to time but find them generally cumbersome for my type of daily work; that is, for the two or three times a year that I might find them useful for wide stuff, I don’t think that they would really suit me and my benchwork. I do however admire them and especially the ones that are well engineered.

Now if the majority of my work was making wide-board dovetails then they might have greater value to me. I am sure the Shakers would have found that to be so. For wide board joinery I have a system that’s both fast and practical. I clamp a 2×2 on either side of the joint end and clamp that to my benchtop and apron. Simple, quick and effectively solid.

Today I find large-size quick release vises to be fast acting, board-grabbing and weighty enough to take the mallet blows without damaging the mechanisms or the bench. I have used one of my Record vises for about 40 years and it was at least that old when I got it secondhand from an old English joiner who like me used it every single day of his working life.

Now yesterday I received delivery of five Record vises I bought for £32 pounds each on Ebay delivered. 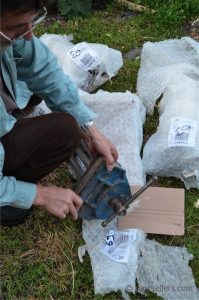 When the old Record company produced these before sellout to Rubbermaid they cost £130. Now I hasten to say here that Irwin Record is not Record. Or at least it is not the Record company of Sheffield I grew up with in the 60s and 70s. A company owned by the US magnate Rubbermaid cannot have the same ethos the originators of Record had when they established their reputation in the same way Record couldn’t have what Joseph Marples had prior to that amalgamation as Record Marples. Remember that these companies today have no loyalty and no compunction in that they buy and sell each other in the same way we might change our under shirts in Houston Texas. How can a plastic bucket and bin maker who sold off most of Record engineering when it was taken over by them have much care about tool making beyond selling plastic handles on their now disposable saws? I am using saws made well over 100 years ago in my everyday work. I just bought a R Groves 10″ brass backed dovetail tenon saw for £19 delivered on Ebay. This 150 year old saw will outlive me by another 150 years. Using my sharpening techniques (next video series for Youtube) this saw cuts fast and effectively both with and across the grain. In other words there is more to a saw than just cutting 2x4s and wafer board. Ever tried ripping down a 2×4 with an Irwin blue-handled hard-point saw?

On the point of Dog holes in benches. I will be posting on this in my bench making retrofit after the bench is completed and the vises are installed. Dogs are not as essential as many gurus making benches make out and everything a dog will do can be readily done with clamps. At the risk of heresy, most of my benchtop work has been done with 1/2″ cleats screwed into the bench top and wedged as necessary. And that’s how most of the joiners and cabinet makers (furniture makers UK) did it too. I do not recall ever seeing a cabinetmaker’s workshop (not same as kitchen cabinet makers US) or joiner’s workshop that had dogs in sight. But I will be showing you how to retrofit non-dogging vises to make them doggedly determined for clamping a` la benchtop and also a dogging system that is inexpensive and effective. Another point, Joel of Gramercy fame, (www.tools forworkingwood.com) has produced the finest bench hold fast I have ever used. I wish I could get them here in the UK. Two swift clouts on the hump and holdfast locks down a 2×4 to the benchtop in a heartbeat and a third judiciously struck blow releases it. Anyway, these are most useful for practical benchtop holding. One of these on the bench and nothing moves. Two of them will resolve many issues surrounding dogging.

I WILL BE POSTING ON THE WORKBENCH PROGRESS LATER TODAY