Today’s work meant chopping mortise holes, eight of them, for a table we are making in oak. It doesn’t take me but five minutes per hole to chop a 3/8” by 1 ¼” deep mortise 3” long, but it took us most of the day. Why is that? Well, here’s the reason:

Chopping mortise holes becomes rhythmic, a developed sense if you will. It occurs naturally in most people but lies dormant, inactive, undeveloped until its aroused by necessity. Not dissimilar to the way people feel that they can’t dance until they do it and at first it seems awkward but in minutes rhythmic movement becomes intrinsic, even inherent. 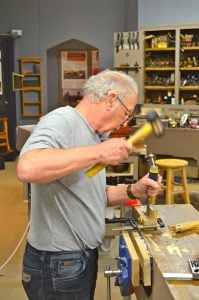 I listen for sounds new mortise choppers don’t yet really relate to until they unite the sound with their sense of feeling as they chop. Well, that’s in the beginning. Soon they respond to sounds and recognise non-productive sound alongside the scarcer productive sound. They recognise the dull thud of a bottomed-out chisel as apposed to a cut and now respond to feel and sound simultaneously but unwittingly. The cht,cht, cht, dut, dut guides them without their consciousness and the stop, move the chisel over and cht, cht starts once more. Six chisels chopping at once seems at first a chiselling cacophony, but, by the sixth mortise hole, rhythm reigns sovereignly and they have rhythmic mortising for life.

There are body issues in a unique language few people know or experience. It’s not the mere driving of a hammer-driven nail, which, though rhythmic too involves much less sensory perception. In our work, the chisels fights to twist, the wood resists, the hand counters and the arm too. 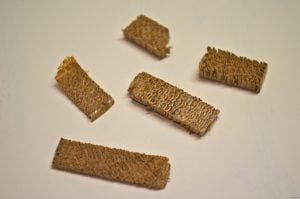 Deeper the cuts go into the fibres with successive responses to sound and feel— taste and smell try to engage but rarely do.

The cross-grain chips lying on the bench tell their tale of order in making mortise holes; in the same way shavings on the woodshop floor speak of the plane’s set edge and sharpness, or the chips carved from the floral medallions the carver makes. I look for rhythm in the chopped out waste, even, full length segments unbroken as rhythm in its pulsing beat beats time in sound waves of air, in wood, in rock in air we breath and more beyond.

1 thought on “The rhythmic success of mortise chopping”