A visit to Cardiff Castle 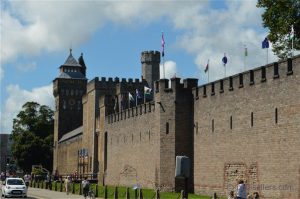 Penrhyn Castle has much in common with Cardiff castle in one thing alone. The manorial house aspects of what was built was built on the poverty of miners and quarrymen labouring above and below ground for a pittance of a below-subsistence level wage. What we admire and respect above ground in these palatial homes today doesn’t relay the stark contrast to the men through whom the wealthy prospered and kept at heel. Thankfully there were brave men who stood in the faces of the rich and wealthy to even out the disparity and distribute the income more agreeably, but there still exists that bitter note in the interpreters who foster bitterness that appeals to the visitors. “And we all know on who’s backs the finances for this house came, don’t we? It was the miners in the pits.” We should remember these things and even be told these things but we should also move on and not allow it to happen again.

I have worked for the wealthy and so too others who have made my designs through the years. From the White House and on down to wealthy oil men and women in Dallas, Houston and far beyond around the USA I have enjoyed the work of my hands and I know others have too. 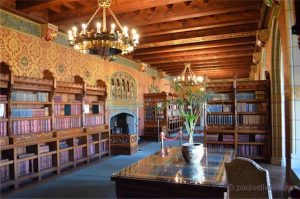 I am certainly thankful for the wealth and the legacy left to me as a working man. These examples are preserved now and will likely not be lived in again. Many such places have been bequeathed back to the generations of people like us by those who once lived in such privilege. And so, here we visit and find ourselves somehow suspended for a moment in a time now past, suspended in awe of a man that worked the wood into realms of woodworking we will likely never see again. One of the most prestigious cabinet making companies in the world here in the UK that I know of sells laser cut inlaid pieces of furniture for hundreds of thousands of pounds. Imagine paying $300,000 for a writing desk. their work will never match we see here.

As you can see, this was not considered opulent but deserved by those rich in possessions, land and people to labour under them. Even so, cannot help but admire the workmanship. 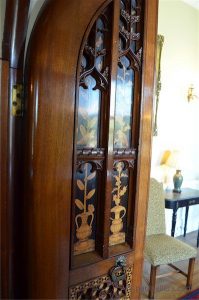 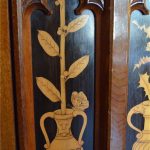 Regardless of who it was made for, the skills were exemplary of incredible design, order and craftsmanship of its kind will never be seen in such quantity ever again. Room after room is figured with distinction and so, when I think of the rejection fostered by socialists like William Morris or the religious spurning of ostentatiousness by say the Shaker furniture makers striving for simplicity, I think I catch a glimpse of what they were speaking against. It’s no wonder the working classes felt to counter the culture of the Victorians living in the absolute lap of luxury and excess. 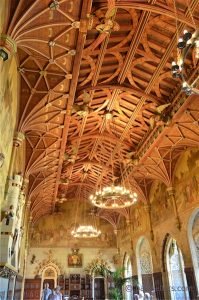 …or the ceiling and book shelves of this library. 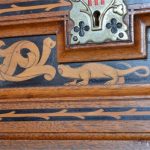 …or paneled doors with holly detailing so graciously formed with a knife and some precise cutting (Shown bove). This make the White House pieces we made three and a half years ago seem like nothing. 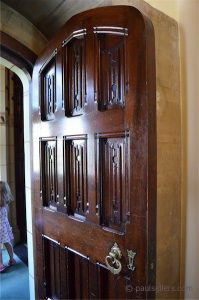 Anyway. I loved these doors… 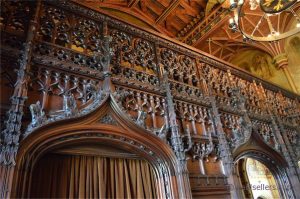 …and the paneled rooms in oak and some mahogany. How about a little vaulted decoration to enhance the sound system, or a sideboard or two to serve food from? 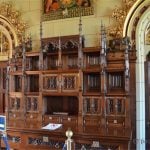 Who were these unknown men that carved these, that inlaid these, that made doors like these? It’s of course unlikely that we shall ever know. But the words written in time past say something like, “Behold, do you see a man skilled with his hands, he shall stand before kings.” I wonder what that meant. Was it his work that would stand before kings in his stead, or would he literally stand before kings? Did his work place hime in front of kings? I don’t really know, but it makes you think when you see the legacy of craftsmanship left to us. What will our generation be leaving for the next? 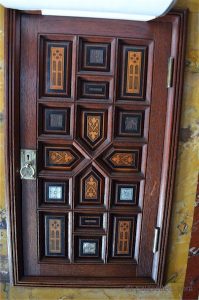 Can we rescue craftsmanship and respect the generations yet to come with the work of our hands. Not many routers, even the most sophisticated CNC routers could even contemplate anything like this. It took hands, chisels, gouges, determination, skill, care, even love to make this. Sorry my friends. If a machine could make this, we wouldn’t be wandering the corridors and halls of the rich to see it. In just the same way when we see laser inlay on MDF we feel the same way we feel when we just bit into the shiny red apple, only to find it was rotten to the core. That’s what machine cut dovetails mean and so to biscuit joints and dowels. They didn’t need them then and we don’t need them now.

This door is a mere 16″ tall and 10″ wide. look at the lovely intricacies in the panels. How truly wonderful is the art of working wood, especially by hand.

4 thoughts on “Looking back to the future”