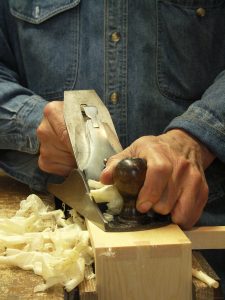 Leonard Bailey was a cabinet maker in Boston, MA in the 19th century and designed a range of tools to use in his trade. Though he worked on his own, he later worked for the Stanley Rule and Level Co where designed the most famous of all plane designs we know as the Bailey-pattern plane. His designs became models for most plane makers subsequent to the mid-1800s.

Working for Stanley Rule and Level, Bailey designed prototype planes of all types including  full range of bench planes, block planes, scrapers and spokeshaves. His highly developed innovations changed only minimally through the decades and many Stanley type planes still carry the name of Bailey in the sole casting.  One of Bailey’s first patents, in 1855, describes a scraper plane with an adjustable cutter. The blade pivoted right above the sole of the tool, which allowed the user to adjust the depth of cut bust suited to the task. I donlt care for scraper planes because the £80 scraper is equal to any task and though it cannot level surfaces, the scraper plane is not ideal for this either. Combining a bench plane with the scraper plane is the ideal alliance for this work.

This is my opener to introduce the Bailey pattern bench plane and particularly the smoothing planes. This will be a series of articles to help you determine what you really need to work wood successfully. I think that it will prove interesting and informative.

← Question on how to get startedBuying good tools cheap – smoothing planes →