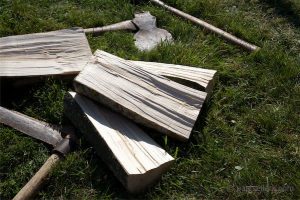 The chisel chops, splits and pares the wood in shapes a man knows but no one else understands and from his hands the shape he sees inside his mind’s reflective eye emerges from the pool of chips now swirled in frozen eddies on his bench top where he stops to take then make decisions from his long look.

The hands twist and he, the man, insists his passage through the wood until the shape he strives in seconds for becomes formed, fully shaped, yet born beneath the chisel’s cutting edge with one direct and forward thrust. 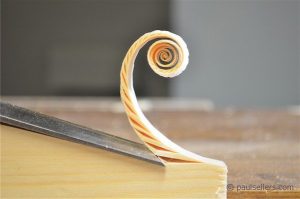 He rests, the man, and looks again inside the fibres no one else can see beneath his gazing eye and there he finds the pearl he’s looking for inside a swirling whorl and knows he this that one failed cut destroys the movement captured in his momentary glimpsing captured now within his eye.

He stops, the man, the artisan, who knows the wood he’s working as he knows his hands and chisel and the mallet’s blow and enters in the depths of deep deep grain with pain his hands constrain and strain again, again.

The bevel rides the grain that presses evenly inside the rising wave of wood as if now surfing in the barreling tide a ride that no one else can know but surfers know and the man knows and others never ever know.

My chisel and the hammer rests, the voice is carved and so too the man rests, his work expressed in wood now speaks of inner quests in statements hitherto unknown and silent in the uncarved unshaped wood.