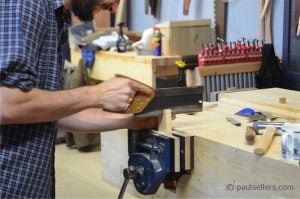 Up until more recent decades, all tenon saws had a folded spline running along the length of the saw, a process developed over 250 years ago and one which some companies held to until as recently as the 1980’s. There are merits to this, but none that warrant changing back. Most people don’t know what that benefit is. The British saw maker that makes almost all of the British-made saws actually make them under one and the same roof and this company, Thomas Flynn, still rely on this simple process. The main advantage is that the saw plate itself is only ‘pinched’ and not fixed with indents and epoxies. The pinched method allows the craftsman to straighten bowed (not kinked) plates throughout the life of the saw. Perhaps the only reason a saw bows is because pinching allows this bow to happen, some might argue. others might argue that there would be far more kinked saws if the back didn’t release the plate if accidentally trodden or kneeled on. But we all know when it comes to tools accidents happen and people do stand on tenon saws when they use them everyday and especially on jobs sites, in offices and in the homes of customers.

This questioner asked me for my perspective on whether steel backs were rated as inferior to brass backs and whether craftsmen were in fact disdainful about steel backed saws. Every craftsman I ever knew swore by brass-backed versions, they were indeed unwaveringly so. In those days your tools were what got you the job when you went for an interview and when you went in search of work the foreman usually asked 1) Where you had even working? 2) Where you apprenticed? and 3) Could he see your tools? (No man would ever enter another man’s tool box without expressed permission.) Depending on the tools, types, quality, condition and such, you either got the job or you didn’t. I liked the system. No contracts, HR, H&S, just responsible people mostly. 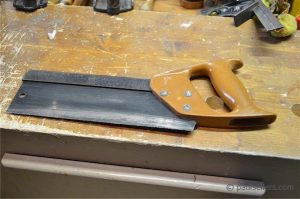 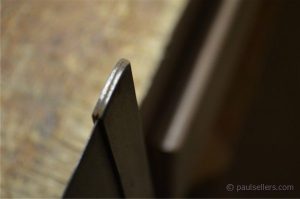 The steel backs on tenon saws were usually made from thinner folded stock and were indeed markedly lighter. Through the years this lighter feature got even lighter until we ended up with some very poorly made tools coming from many major producers. In the 60’s, tool companies were looking for more fashionable style whilst at the same time trying fob us off with tasteless construction and poor quality goods. Stanley had dropped its brief excursion into saw making and produced a Teflon coated plastic handled saw (Shown above right), which actually worked surprisingly well, never rusted in 45 years and had almost zero friction. I still have it, though I was of course frowned on for several years. 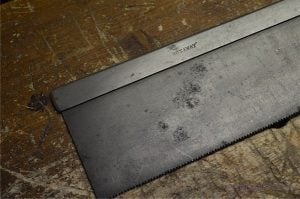 Back then there was no such thing as second hand tools and of course no Internet and yet been birthed. New tools were the way everyone went unless an older joiner liked you and handed down a few tools to get you started. 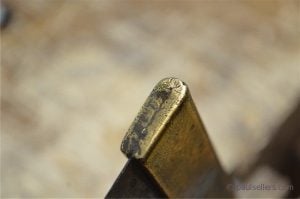 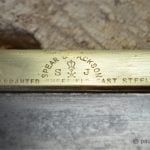 I bought this little 8″ S&J for £6 ($9) from a car boot sale last weekend. They don’t feel the same in steel and feel is a key feature as well as sound too.Sound? Yes, a brass backed saw sounded less tinny than a brass backed one and I think this too has a baring in that the brass serves to dampen to sound of the plate as you cut. The saw actually progresses into the cut better with less…yes, you’ve got it…vibration resulting in sound and chatter caused by friction, flex, and more external influences ranging from force, body alignment, arm/hand alignment, angle of saw presentation, handle position and so on. When it comes to saws I like the extra weight of brass. I like to push forward and not downwards and that means I can focus on one thing only and that’s direction. The men I worked with always told me that I shouldn’t need to press down with the tenon or dovetail saw (we didn’t call it a dovetails saw then either), just forward. I look at that now and say the same. A well sharpened saw needs minimal downward pressure.