Yes, it’s rhetorical really. I wanted to look at something you may not have considered and in searching for something to resolve chatter in your plane or on your wood you may not have though possible too. Let’s at least reason together for a moment.

Squeaks and squeals from planes

I sometimes, quite often, hear the squeak, squeal or trumpeting sound when I or someone else is planing, only to look down and see chatter marks in the surface of something I or they are planing. Most times I shift and twist the plane to skewing position. The slighter, more skewed orientation gathers the surface fibres and leaves it perfectly smooth. Then, on other occasions, the noise continues and I feel invaded. It’s quite loud and predictably repetitive. I reach for a 4-oz tomato can with a neatly rolled and then wadded up rag, previously soaked in light machine oil such as 3-1 and left to soak down and then wick up very small amounts to the ‘dry’ surface. I have used this for 49 years…every day. I pull my plane across the ragged surface so that the sole gathers the most slight surface treatment. I place the plane on the surface I am planing and I plane the surface effortlessly and in silence. The number one question that arises after I do this is, “Doesn’t this affect the finish on my wood when I apply the finish?” My answer is always, “No.” Finish when tainted with contaminants like silicone or grease or oil will cause the surface of some finishes to fish-eye. Because almost all trace of contaminant is planed or sanded away, I have never had that happen on any of my work using the accessory I described. Many woodworkers will tell you this is a problem. You don’t need to concern yourself. It’s not generally true and in 49 years of working and finishing wood, it has never once proved a problem for me.

Articles can be misleading or, more likely, they may not consider everything

Articles defining plane chatter and indeed spokeshave chatter rarely mention simple, pure plane vibration caused by sole friction between the sole and the wood itself. Inevitably most automatically say it is always thin irons and lightweight Bailey-pattern planes. Of course that’s not at all true. Thin irons were used by hundreds of thousands of woodworkers through a whole century with no questions ever arising about chatter at all. Bailey pattern #4’s never chattered before the article was written and because some people needed something to make, but couldn’t better the #4 plane, they proposed a thicker iron to counter the problem of plane chatter that never existed in the first place.

The single phenomenon of plane chatter through sole friction, friction vibration not online chatter, causes more chatter than any thin iron ever did. Now then, did you know that putting dampening material between two components, the cutting-iron assembly and the plane body – the frog mounted in the sole – creates plane dampening and this dampening minimizes any adverse vibration we might perhaps more describe as an oscillation. This oscillation results in two simultaneous reactions; clear sound and surface chatter. This chatter counters the plane’s performance potential and the plane cuts extremely close symmetrical and parallel lines. If I take the plane iron assembly from the body of the plane, and continue with the same planing action, the plane still vibrates. This then proves that the cutting iron and the cutting edge did not cause surface chatter so much as respond to the vibration in the plane body carrying the cutting iron assembly. Some might at this point say that that doesn’t happen to thick ironed thick soled plane types. That’s not true. It does. But of course the 4-oz tomato oilcan treatment works on light and heavyweight planes alike, so it’s not an issue. Of course if you have bought a heavyweight or Bed Rock type plane it’s hard to admit that it chatters. Most of my students that have bought heavyweights say that they bought them because their lightweight planes chattered. They are often surprised that they then found that their heavyweight plane chattered too. We apply a 4-oz tomato can stuffed with a rag to the sole and they immediately respond by stopping their chatter.

Then we looked at bevel-up planes. We found that they squealed and chattered occasionally too. Actually they did it quite frequently. These planes are all fairly heavy. On end grain the chatter seemed a more common occurrence. Well, we applied a 4-oz tomato can stuffed with a rag to the sole and it stopped chattering; no answering back at all. When we use a #4 smoothing plane to the same endgrain task our results where no-noise no-chatter planing with excelling results that paralleled any other plane. They stand amazed. 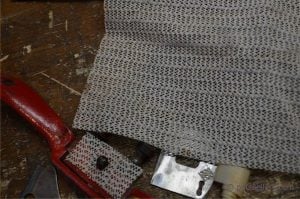 Adding silicone shelf liner (that rubbery stuff in rolls that has perforations all the way through it) between the plane body and the cutting iron on any plane (heavy or not) changes the sound of the plane as you work the surface of wood. 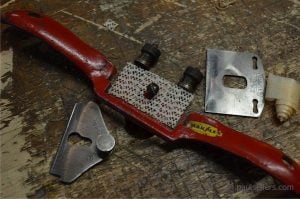 Try it. I use shelf liner to prove my case. The type they often call silicon shelf liner for non-slip situating of cups and plates in cupboards. This plastic material cushions dishes as you place your fragile breakables in the cupboards, especially on slippery melamine surfaces. This stuff mushes up and compresses between hard surfaces and works like the dampening material used under the bonnet (hood USA) of your car. Unfortunately, because of its sticking ability, it also makes the lateral adjustment lever hard to move and this slows down the shifting of the lever needed to micro-adjust the cutting edge alignment.

Look at any surface where the usual squeak takes place during planing end grain and you will find chatter marks. Add a minute waxing to the sole of the plane and it will disappear. Had you added plastic shelf liner between the metal blade and the plane body, it would likely not have happened.

On really fine work, using say a #151 spokeshave, I place a bed of silicone shelf liner under the cutting iron and on the plane body. What joy this is to use when I do this. No oscillation, no noise and a pristine surface left behind.