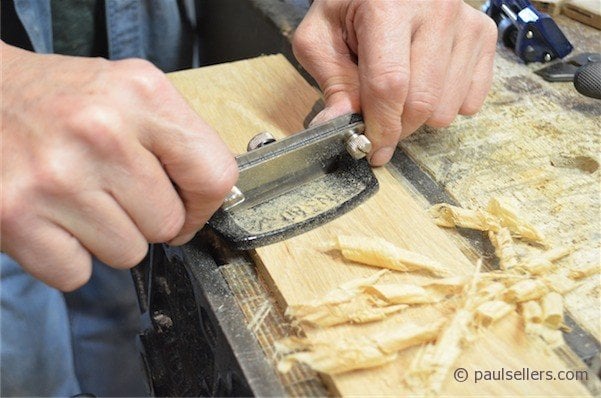 I bought three #80 bench cabinet scrapers this week. I wanted to try one made by a UK supplier called Faithfull. The tools arrived neatly boxed and looked like any Stanley #80 scraper I’ve used over the decades. The main body seemed as good as any Stanley minus holes in the handles, which I drilled out myself with a 3/8” twist bit. The knurled screws would have been better with thumbscrews for convenience and easy torque application instantly. I bought these online for £11. That’s the cheapest price for a new tool, or it seemed that way, but when I got into the heart of the scraper I noticed that the cutting blade was thinner than normal. Some might say that this doesn’t affect the performance but it actually does. There is a little more flex that results in a tinnier sound on the wood, but the cutting seems unhindered and the cut productive. The thinner blade was easier to sharpen and the blade took and kept a good edge. I will test it out over a longer period to establish my final feelings.
Here is another rub. 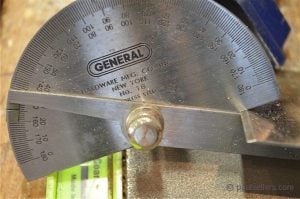 The bevel on the cutting iron was ground at 25-degrees as if being a regular plane iron rather than a scraper iron. This leads me to think that Faithful knows nothing about the tool. To establish the correct 45-degrees is easiest using a honing guide like the one shown here. I set the proper angle using a combination square. 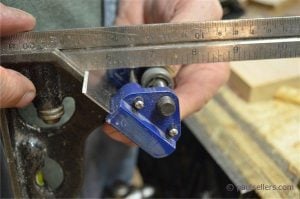 I leave the stock slightly off the wheel so that as I grind on the diamond plates the ground bevel sits dead on 45-degrees when done. 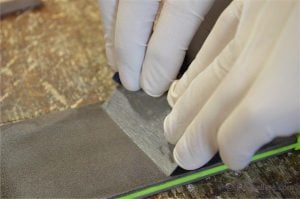 I go through the usual three grits to get to a more polished edge on the final honing at 1200.

After that the consolidation process of sharpening scrapers follows the standard procedure. I found the scraper worked perfectly after the simple remedial steps. 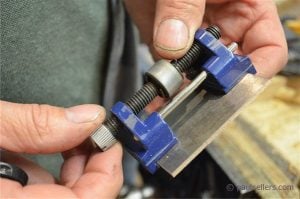 The honing guide is a standard single roller guide I like to use for redressing cutting irons. They are inexpensive and last a long time.The simplicity of set up has long been its chief selling point. Not sophisticated and unpretentious all around.