This seemed interesting to me. I thought it might help others to know what actually happens in this important aspect of chair making. Some time back, around June this year I think, I read in an issue of Fine Woodworking where a person wrote to FW for an answer on an aspect of chairmaking. The question went:

I’m making a chair, and the front is wider than the back. The side rails and legs are joined with mortise and tenons. Should I use angled mortises with straight tenons or straight mortises with angled tenons?

Jeff Miller, a furniture maker in Chicago, answered on behalf of FW and told the questioner  quite rightly that a straight tenon into an angled mortise was more difficult to make. That, for me, was where the good advise ended. He then went on to say that the ‘inline’ tenon “is a better choice for two reasons.” “First,” he writes, “because the tenon is straight, the grain runs along the length, making it strong.” 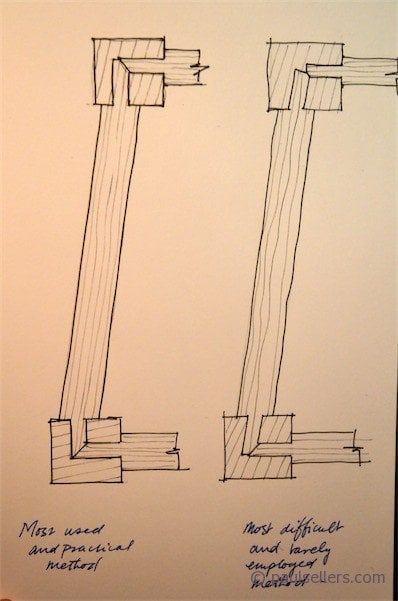 I am afraid that some might read this statement in a way that then infers that the traditional and predominantly used method, used for two centuries at least, is weak, which is not the case at all. He then goes on to say that the grain on angled tenons can “dive” toward one side, making the tenon weaker and prone to breaking. This too can be true but is rarely the case not the norm. I am afraid that this answer again further infers that hundreds of thousands of furniture makers making millions of chairs through the centuries got it wrong, which, again, simply isn’t the case at all.
In actuality, it is indeed a rare thing to find a straight (inline) tenon applied to this situation where jointed areas to narrow-backed chairs are formed with inline tenons and angled mortise holes and that’s because of the complexities surrounding shoulder lines as well as clamping and the fact that any added strength is so marginal it actually makes very little  difference to the strength of the chair. What this method would do however is make what is quite simple and appropriate, complex and difficult and generally an inappropriate and unnecessary application.

I thought it important enough to redress this issue and try to balance out the answer even though I may well be too late to correct this unusual offering. In my view, I wouldn’t ever suggest anyone try this as a practical method. Even by machine it takes some jigging and adjustment to get the angles right so that the shoulders line up perfectly using angled shoulders and this is especially so if you are making only one chair as the questioner states. In all of the chairs I have worked on for repairs, made and seen in fifty years of furniture work, along with my study and research, I have only ever found one chair using this method and that was a very poorly constructed example. On the other hand, and for obvious reasons, post and rung chairs are always inline. The reason being that post and rung chairs are simply bored holes receiving round rails and rungs.

← A new series to make the wall clockMaking the Wall Clock →