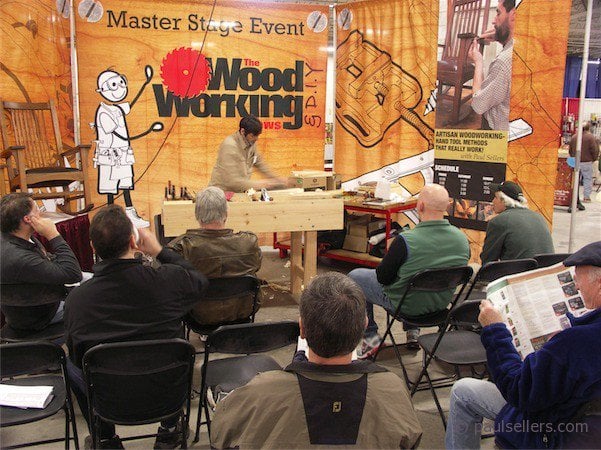 It’s surprising how many woodworkers were interested in the small bench I was using at the show, yet in other ways it’s not. What I am using is a smaller version of the traditional joiner’s workbench we made in the workbench build on YouTube, not something particularly fancy but a very real working workbench. Add into that equation the fact that the once new and innovative quick-release vises from Britain stood the test of time to become the accepted and traditional vice and your third hand becomes complete, whole and utterly supportive of everything you as a working artisan needs to successfully work wood. What’s amazing to most people who watched me demonstrate its efficacy is the fact that though only five feet long, two feet deep and just over three feet high, and the fact that I was edge jointing, dovetailing and mortise and tenoning, the bench stayed put, rock solid and never baulked at what I expected it to do. 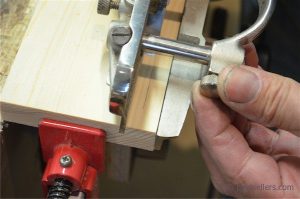 The other thing is the prevailing insistence on using a hard, dense-grained wood for the bench construction. Softwoods have long been the preferred choice of carpenters throughout Europe and indeed North America too. I think that the expectancy of pine or spruce to last is the problem and I think that some pines are indeed too soft for the task. European redwood is a hard pine with consistent hardness. It is not Eastern white pine. Some softwoods are harder than others and others have higher levels of interlocking grain and many knots, something I like for a bench. Some knotted and wiry grained woods are better for a bench build than straight-grained knot-free stock. I see a phenomenon in todays woodworking world that has become somewhat pervasive and that is to be ever admired or worse still looking for acceptance because of your bench. Hound’s tooth angled tail vises, three months of bench build, mass-on-mass weighty wood and then of course the competitive nature to be the bestest most recognized. All you wanted at the start was to create a third-hand-support for your work and your tools. 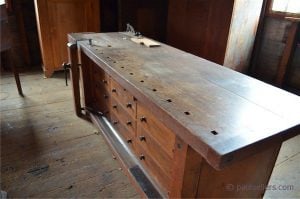 I met a man who declared he was a perfectionist and that when he built his bench he would be using this and that wood. He said he was waiting for the right wood and had been waiting for four years. He was waiting to accumulate the best tools money could but too. He named the planes and the saws and the chisels hew would be using when the great day came. He couldn’t afford to buy them all because of costs, but soon, one day, he would have his dream tools and his dream bench and his dream “wall-hung” tool cabinet crammed with bevel-up bench planes of every type and he would one day have his dream purpose-built workshop. What he couldn’t accept was that he could buy all he needed to work wood for the cost of his dream plane and his dream saw. WHat he didn’t realize was that he could be out in the workshop filing saw teeth and even if they were not perfectly formed that saw would most likely cut just fine. What he didn’t realize was that prissy saws with prissy teeth and curly-wood handles would still need sharpening in a few weeks time and that he, because of his perfections, unachievable goals, unrealistic intentions would most likely never achieve his real and original goal to become a real woodworker.

Of course I couldn’t reach him. I suggested he get an old Disston from the secondhand tool dealers at the show and practice sharpening them. Guys were coming up to me with tools each day of the show. #4 planes, 4 1/2s and 5s too. Tools they bought online or in the back of a pickup truck outside. I saw at least half a dozen D whatevers and a couple of D8s. Nice saws for $20-30. Marking gauges and mortise chisels, chisels of every type. The guys where bright-eyed with their finds and I doubt that they would leave their finds for more than an hour before they were out by the wood stove in their sheds fettling their finds.