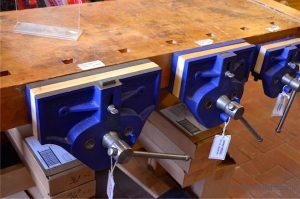 Of Course They Do – and Exceptionally Well Too.
Today I read an article that stated that, “We invented iron quick-release vises, which won’t hold much of anything relating to woodworking.” Bemused by this, I wondered why it was said and then I wondered why hundreds upon hundreds of thousands of woodworkers used something that didn’t, according to the author, “hold anything relating to woodworking”. The quick release vise has indeed stood the rigours of testing for a century now and has sold over any other vise ever invented. One of the most noted was of course the Record quick-release vise.
So, I too have used quick release vises for 50 years now, and one of them was almost 50 years old when I got it. My Woden vise opens to a massive 16″ and it too is about 80 plus years old.
I simply don’t want anyone to be put off using cast iron vises that offer quick release options, absolute dependability, functionality and solid safe holding through and through. All of the ones I have used lasted, work effectively, save much time and can be installed in under an hour for a lifetime of use.