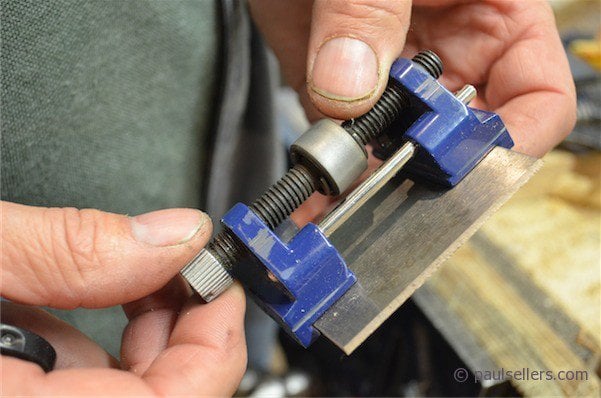 I read a recent Fine Woodworking article that conveyed that certain authoritativity in stating “You Need a Cabinet Scraper.” It became one of those articles you first skim over in a glimpse and then you look back to see if what you read was really in print and that you weren’t mistaken in how you took it.

#1) First off it said that the cabinet scraper was “the best tool for cleaning up tearout before final smoothing” and it was this that made me ask myself whether that meant that someone was saying that the tool didn’t or couldn’t give a finished smoothness in and of itself and that it needed sandpaper or some other process to correct the flawed surface it left. This is happening more and more with this tool.  Further more, the thought came to me after reading the article that what is a fairly simple tool to sharpen and use suddenly became complex, expensive and confused.

#2) The second statement made by the author was just sort of slipped in as a fact and this too intrigued and bemused me. He said that “using the (cabinet) scraper hardens the edge too much to allow you to re-turn” the edge. I never heard this and so I questioned more the fact of the statement because that is not the reason that you generally cannot re-turn the edge on the cabinet scraper blade. There actually is a bona fide reason you cannot re-turn the edge, but this is not it. Stating that the work of “using the scraper hardens the edge too much” doesn’t mean that what’s being said is true, so what is the truth? How much heat does it take to turn steel from a working steel capable of taking and holding an edge to one that’s too hard. I always understood that steel needs to be taken to cherry red and then plunged into a cooler fluid such as water or oil. Is this the same criteria or is there another type of hardness I don’t understand? Remember in the sixties when we said, “Question authority.”?

Now I am still on the first page here, which is 80% photo’s and we have two more pages to go so bear with me.

#4) “Unlike the more familiar card scraper (That’s not true. They are both equally well known and used) the cabinet scraper is not made to leave a finished surface.” I never heard of this before recently and have always used them to create pristine glass-like surfaces so smooth that they need roughening with 240 grit sandpaper so that they will take a finish; The roughened surface being given tooth by the abrasion. If we’ve honed and polished and burnished from a start-point of 16,000!!! And then further burnished that edge before turning it what must that cutting edge be?

#6) “It’s a bit of a quirky tool.” It follows on to then state that the blade looks like a card scraper when in fact it looks nothing like a card scraper, but more like a short plane iron. The tool is also quick to sharpen, simple to set up and works like a dream every time. No real quirks to it so let no one be intimidated by it.

#7) “That the card scraper can leave divots” in the surface of the wood. Not really. You would have to be using it pretty badly to do that. Card scrapers are the least like surface cutting tools to leave divots.

#8) It seems that the goal is to make “nice shavings.” The shavings have little to do with anything. What people need to know is how to make a nice surface. 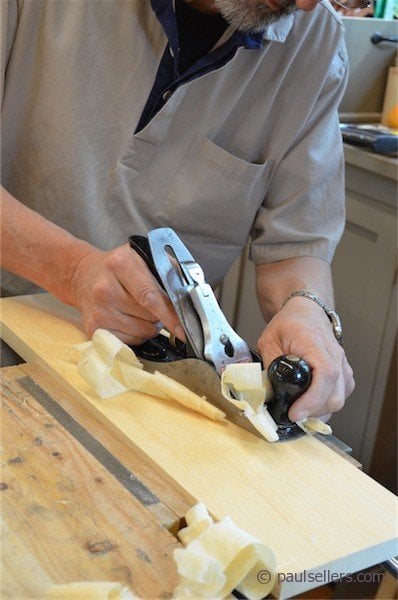 #9) I don’t doubt that honing through four grits to 16,000 gives a highly polished edge, but this sounds as though you must now go out and buy four very expensive sharpening stones to do what we have done for a couple of centuries with a file a stone and a burnisher. How did those men do it all those years ago without this information?

#10) After all of this the author says that burnishing  the bevel makes for a sharper edge. That’s true, the question for me is whether the four stones were necessary then. He also states that several strokes back and forth across the bevel flattens out scratches left from honing. I mean, 16,000 grit! These statements raise many questions. Especially as after all of this he is only producing a finish that then needs further refining with sandpaper.

#11) The author uses the point of his cone-shaped burnisher to now retrieve an overturned edge. Why not just turn it rightly first off the bat and get on with the job as we have done for a couple of centuries and more? Does this mean we must buy yet another tool for sharpening? And one costing $65 plus shipping and handling?

#12) “Set up for fluffy shavings.” “Fluffy” and “nice” shavings may be a byproduct of having an edge that cuts the surface dead smooth but that’s not the objective. I think often of how we go to shows and see shavings spilling from plane throats and we see people selling planes and we are beguiled by the shavings thinking that’s what we are looking for.

#13) Major, major blunder here. Should be in all caps. We all do it. Don’t listen to this advice, never mind do it. The author says “insert the blade into the scraper body from beneath, with the hook facing toward the depth adjustment thumbscrew.” Utterly the wrong way around , back to front and backwards. Whoops, get ready for an ear-piercing blood curdling scream from the scraper…

#14 “With the scraper on your bench, press down on the blade so it’s bottoming out on the bench.” Bench surfaces would need to be pristinely flat and somewhat firm and hard; better a harder surface of well planed wood, smooth plastic laminate, MDF or some other such surface because it must be level and flat.

#15 Here comes something of a rub. “You can buy a burnisher like this from (Philip C) Lowe for $65”. I wondered whether this article might be better in the tool review section.

#16 The author reiterates, “The cabinet scraper isn’t meant to produce a finished surface and you’ll be smoothing afterward.” After all of that work. Phew!!!

#17 “However, because the plane’s sole”. This could be another mistake, but the scraper is still called a scraper even though ‘scraper’ is a great misleading misnomer too. It really isn’t a plane.

I will answer the many issues surrounding some of this misinformation shortly to get rid of anything that might become fact for fifty years. We’ll choose a poorer man’s approach that culminates in super smoothness from the tool’s edge so that we use sandpaper for roughness and not corrective smoothing