Safety issues are always our own personal responsibility, and i know that it’s obvious this ad is advertising sandpaper products, but there is still something businesses should do to make certain the ad content doesn’t mask the inherent dangers surround a product, machine or method of work. This ad and another Shopsmith uses shows people working without adequate protection as do most magazine images. This, as I say, masks the dangers to present an image of freedom that doesn’t actually exist when using machines.
Did anyone else see this advert in Popular Woodworking this month? 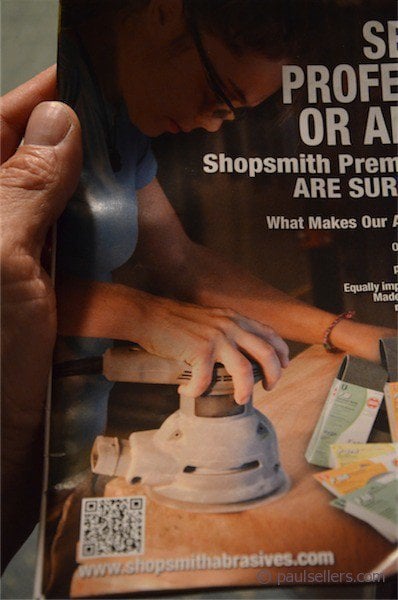 Did anyone else wonder why it said, “Seasoned professional or amateur? I wasn’t at all sure if there was one of those hidden meanings in the fact that she was wearing no dust mask and she was obviously using a sander that had no dust bag or extractor connected to the dust port at the rear end of the sander. Was this as it seemed to me, sort of  irresponsible advertising. I thought perhaps I was missing something here and someone could explain to me some subtlety in the ad.

Here we see a woman sanding with protective glasses on ( I think) and no other protection. Of the three head protective pieces, which one would you most likely be wearing in this advertisement, she’s wearing eyeglasses only, which I think is also important but was this just a mistake?

A similar ad appears in Fine Woodworking but this time it’s a man wearing glasses but no dust mask and using a belt sander. This one doesn’t show the tail end though.