Spoons, spoon making and how we make them 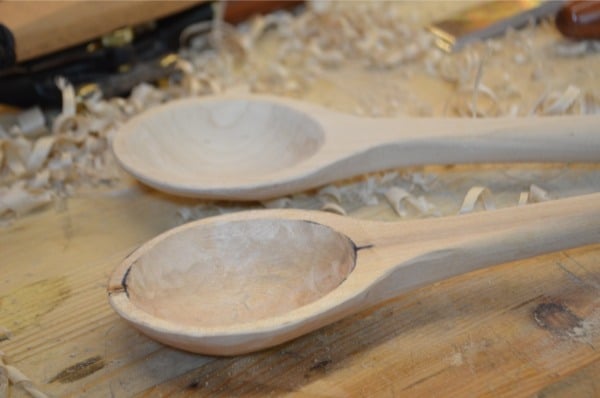 Spoons, wooden ones, can be mass-manufactured and made very cheaply once you have your design, the mechanism it takes to make them and the dynamic needed to set up the mini factory. Keeping your goals free from certain influences is critically important and especially so if family members are involved. I have several anecdotes to guide you in your pursuit toward going on your own and so I will start with this about a friend and then I have some about me.

Some years ago I taught and friend and his children to make spoons. the kids were quite small. part of my reason for teaching the dad was so he could come into the deeper relationship with his children that he told me he wanted ore than anything. Everything went well, really well, for about three months, and once the learning curve was completed I of course stepped out of the scene, which has always been the case and the purpose in my training others. The next time I saw the man and his children he was so excited, but I looked at his children and their sparkle had gone from their eyes. I wasn’t sure what I felt so I simply looked at the spoons they were making. At first I thought that they looked, well, just nice. the spoons too had lost their sparkle. there was dullness about them. A sort of flatness, like when you look at a painting-by-numbers picture or a jigsaw puzzle of a classic framed in a coffee table or hanging on the wall. I took a second spoon and it looked just like the first, lifeless. I said to my friend, “Oh, you’re making the spoons by machine now.” The shock on his face at being somehow ‘discovered’ seemed to send shock waves throughout his body as he recoiled from my words. It seemed to me that every defence 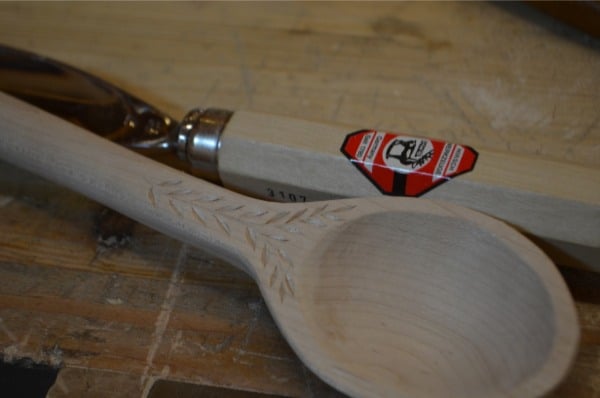 mechanism was immediately triggered in a matter of seconds and yet I wasn’t judging anything he did. He began explaining to me that it was far more efficient economically and much faster for he and his family to make the spoons and sell them. I still don’t know why he told me that. I know more about mass-making things from wood than I do hand work and machining wood. The kids eyes remained as dull as when I first arrived and I went to the bench and lulled out my gouge. I carved a spoon as I talked to the family. I talked about how easy it is to take advantage of loyal children, family members and friends when you start setting up mini-factories in your garage. I talked about natural laws concerning health and safety that surround using machines in confined areas and that the processes he was using were infecting his children’s lives at a very young and impressionable age. The screaming router and the jigs, the bandsaw cuts and the drum sanders and taken the family out of family and made it a zone of commerce. The kids were part of the factory process. Their nimble fingers could scrape and sand where the router left its telltale signature in coves, lines and snipes or snags. Before long, an hour or two, they felt separated from their work. The had been placed on the conveyor belt and what they had had before was lost in the money-making production. Instead of making a range of different things by hand, they were now “specialists”. Spoons only, masses of them. Production got times and orders came in. They had lowered their prices to knock out competition and were now wholesaling their spoons at half what they were doing so they could “get the big orders.”

I felt troubled more by the eyes of the children. So much so I talked to this dad-friend. He seemed excited but he also seemed in a hurry in all he said. He seemed even agitated and work seemed to have escalated. I simply asked how he felt about making the spoons now. He stopped and looked at me. “We have orders coming in all the time.” he said. “More and more”. I asked him, “Is that what you wanted for you and your children?” “No,” said he, honestly. From there on he dismantled his business and started making quality spoons for a narrower market. His prices went back to a healthy level and as far as I know he still makes spoons, spatulas and cutting boards.

Later today the spoon making begins with the first article. I wanted to preface this with asking the question Just how will you measure success when your friends ask you whether you are successful? Is it how much money you sell your spoons for? Is it how many you’ve sold? That’s how they measure your success, but it does not mean you have to measure it that way at all. Lifestyle woodworking is the sole goal for me and it always has been. Enjoy!

10 thoughts on “Make sure your goals remain firmly in focus”