I especially like the set of scrapers Lee Valley sells made by Veritas. It’s a set of four in two sizes and four thicknesses. A set like this takes care of all of your scraper or should I say scraping needs. But I especially like the one I reshape into a bowl scraper. I use this type for spoon hollows and here is how I shape them.

First off the shape is a simple half ellipse. This ellipse can be reshaped to a finer or blunter curve but I rarely change this shape at all. Instead, I have two other scrapers shaped to take care of my needs. It takes only a few minutes to make a curved scraper specifically for spoon and bowl shaping and I find that they work better than the swan-neck scrapers commercially made. 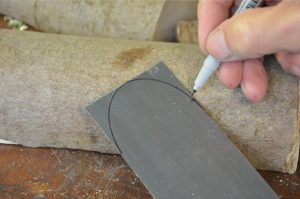 I derive my shape by folding a piece of card, drawing the elliptical quadrant I want and transferring the shape to the steel plate with a fine-point felt tip. 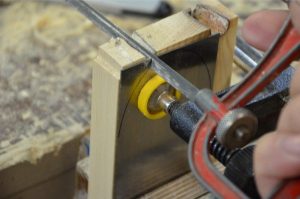 Now I cut the corner from the steel with a hacksaw. I cut one perpendicular in the vise but then change to a flat position, which I found worked better. I used a backer of pine to support the steel and prevent it from flexing under thrusting pressure. 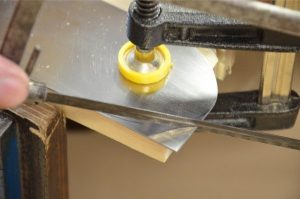 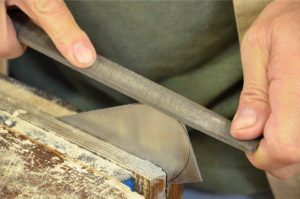 Filing is simple, effective and quick using a regular flat 10″ mill file. I first file off the high corners into a series of smaller flats to prepare the way for curved strokes. It’s best to follow the curve along its edge rather than into it. That way you get the long continuous strokes you need for refinement. 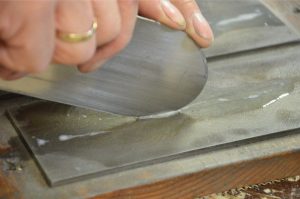 After filing to shape I refine the edge on the sharpening plates. In my case I went through the three different plates I have for regular sharpening, which are 250, 600 and 1200-grit. You can go to a single stone and this too works fine. 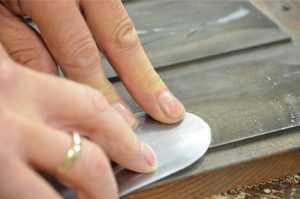 After squaring the edge, place the plate flat on the fine stone only and remove the coarse burr left from filing and honing. This is not the kind of burr we use for scraping.

Important Note: It’s important to understand two misnomers associated with scrapers used in woodworking. Both the cabinet scraper and card scraper are indeed called scrapers. They do not scrape at all but slice and pare the surface with very unique and highly refined cutting edges and therefore using the term burr is erroneous too. That said, we won’t change the status quo now, but at least we should understand the difference between burr resulting from file work and sophisticated cutting edge. 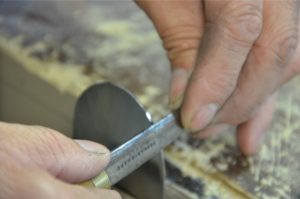 I use the burnisher to consolidate the steel into itself on both faces of the steel. This simply a question of pressing the burnisher into the face with repeated passes over the corner areas. It’s important not to burnish a bevel but keep the burnisher flat.
Once the consolidation is completed from both sides, the edge is burnished with the same burnisher.

Watch out for the new video we will be posting on sharpening the round or shaped scraper soon.

3 thoughts on “Shaping and sharpening round scrapers”