Paul, I noticed during your bed-build that one of the tenons used had a slant on one side. When does a tenon need to be more than a rectangle in appearance? When is a haunch tenon the best use of a tenon? Lastly when a wide board is used and a tendon required, Why is the tendon sometimes cut in two or three tenons instead of one long tenon? I think I need some schooling on when to use the various types of tenons.

Q 1) When does a tenon need to be more than a rectangle in appearance?

A 1) I wasn’t sure what the question was in this part. This might help, I don’t know. It depends somewhat on the tenon type and the application. In furniture and general joinery we employ double tenons and twin tenons. Double tenons are paired inline, one above the other, twin tenons are generally paired side by side. There is much information that confuses this; some woodworkers for instance take a twin tenon and describe it as a double tenon and double tenons as twin tenons. This may not seem to matter, but it makes a big difference if you ask someone to use one or the other. 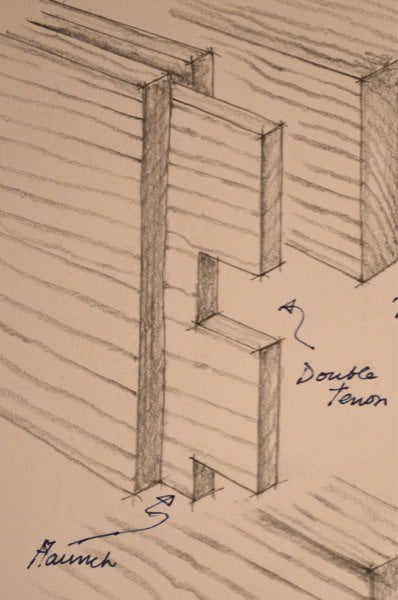 In door construction we generally rely on the double tenon to minimise the amount of stock we remove from the mortise hole. This of course was when we made doors with wide bottom rails such as shop, and business entryway doors and such. Mansions too had massive door rails. Since the advent of metal doors these doors have disappeared and so too the methods. Taking too much out to accomodate a full-width tenon weakens the door stile at this critical juncture, which is usually at the bottom and middle rail intersection of doors; removing the whole of the mortise means there is no integrity uniting the thinner inside and outside sections of the mortise. By leaving a section between the double tenons, we maintain integrity and strength. 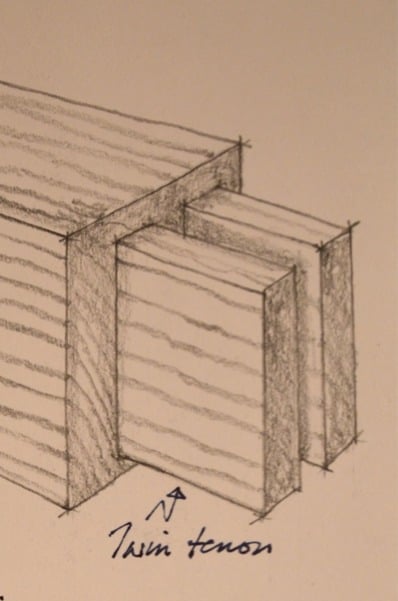 Twin tenons on the other hand are side by side and can be large or small. We use them on thick doors, say 2 1/2” to 3 1/2” thick. This adds great strength to the door. We also use it for cross rails for wider material where a rail intersects a leg of a table or desk for instance.

When we use wide tenons and do not want to create a double tenon, we can reduce the width by adding what we call a secret haunch.This is the “slant” referred to above. The secret haunch, shown bottom, restrains the extended aspect of the rail and prevents any curl from occurring. Any shrinkage that takes place over the narrower tenon will be in the area of the sloping secret haunch and will not be so visible if shrinkage takes place.

Sizing makes the determining factor. We rarely use such large tenons but when we do we have options. But don’t consider smaller tenons to be exempt from a double tenon feature. We did this in woodworkingmasterclasses here and it was much extra work that was worthwhile and will always be worthwhile. Joints are often hidden from view, concealed within surrounding wood, but they are not hidden to us even after they are inside. I think it is a most enjoyable thing to make any woodworking joint provided the whole process is completed by hand.

A 2) The best use of a haunch is when it’s necessary. I have a written a treatise on Mortise and Tenons for Today’s Woodworker as part of a new book I am working on and the use of haunched M&T joints is covered there. We use haunches at the 90-degree corner to a frame. This allows the total enclosure of a tenon while constraining the full width of the tenon along the intersecting shoulder line of the tenon. Table construction relies on this joint in particular and so too workbenches and worktables. I think though that one of the most apt uses of the haunch is in door construction where a groove is used around the inside rim to house panels of different types. The groove for the panels necessitates a haunch so its a sort of symbiosis I like, if that’s not too far a stretch of the meaning of the word.

Drawings from My Woodworking Journal by Paul Sellers 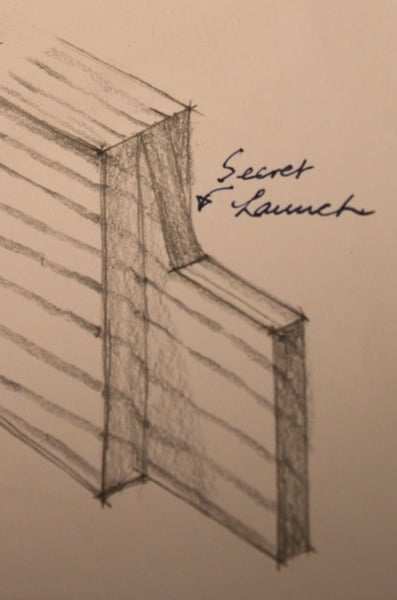