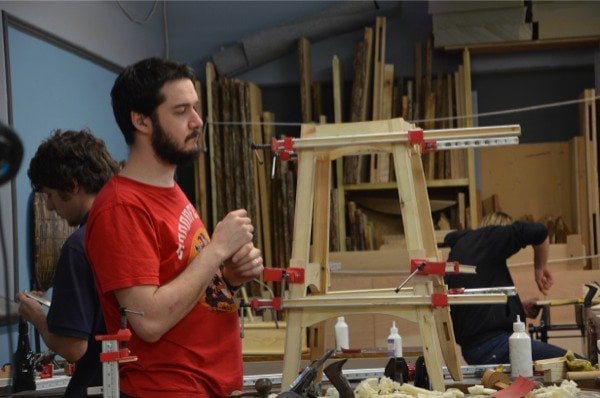 Yesterday Phil finished his workbench stool and it looks very nice now he’s done. I was just about to finish the last of five bookshelves as a medley of useful shelves scaleable as options for people to build and John hinged the lid to the tool chest he has been building. All of this was yesterday and all of this is to say completion is critical to our wellbeing and its something Henry Ford deprived his workforce of as he introduced methods of production line manufacturing that destroyed the reward of being skilled and honest engineers, farmers and craftsmen. This all happened exactly 10o years ago. I know the ten million model T Fords that became possible from his conveyor belt mechanics meant “about everyone (would) have one.”; it remains to be evaluated whether we or our children will pay far more than we ever though possible for four wheels and a box, but for the factory mechanics he employed as wage slaves, their skills had to be dumbed down to an assembly line moving at six feet per minute so that they were specialised for speed assembly. That’s what everything you own right now is based on and that’s why people pursue fulfillment outside of work. Conveyor belts reign in every walk of life today. Hospital beds and bus queues, carpenters in construction and check out counters and checkers, Big Mac stuff and everything else is about quantity and down time so we can live cheap in cheapened life, but, in tiny clusters around the globe, are individuals who stopped, ask themselves a handful of questions, pushed the red emergency stop button and reevaluated what they felt was important enough to push, stop and get off.

I have never wholly understood what it is about the words, “It is finished.” that I always say at the end of a project, and that seems such a reward in and of itself, but somehow there comes with it a sense of joy-filled completion when nothing is to be added to it or taken away from it. It’s that quality completion you feel when you have put all of your efforts into the work and the final effort stands in bright light before you.

When I work on a piece things do happen that go wrong. You plane a piece of wood and the grain tears even though you were indeed careful to look at the grain direction, followed the “cathedral lines” and such. Life is like wood, it comes with knots in it. Wood splits unintentionally and in the wrong direction, again not a mistake. Woodworking is more about fixing natural occurrences and knowing wood well enough to anticipate happenings that can impair the quality of what we are making. I think that the art of being a craftsman is working through critical problems and knowing what to do with a material that changes as you are working it. It’s about constraining it, reducing it and minimizing its ability to distort after the project is completed. It’s not about resorting to using materials like MDF and engineered boards that substitute for that which makes wood wood. 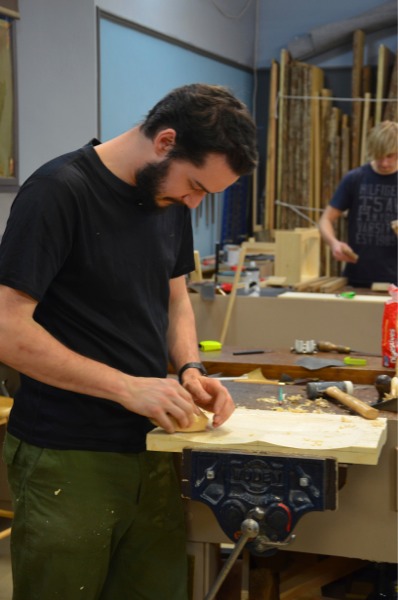 Phil has many other responsibilities as well as woodworking, but it is critical his wellbeing to make and complete all that he does. We do not mass-make anything in our workshop. That means sanity and enjoyment, peace and fulfillment. As he pulled his stool to the bench and sat to work on his computer yesterday I sensed his sense of fulfillment as he smiled across the shop floor at me sitting on my workbench stool. 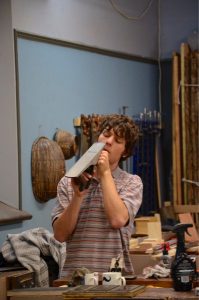 John was fitting his lid to the tool chest ready for the hinge recessing he was about to do. He set his new I Sorby plane carefully to level the box rims. There too was another completion in that his plane was fully restored and functioning. All of these completions mean wellbeing and fulfillment as we banter back and forth throughout the day. 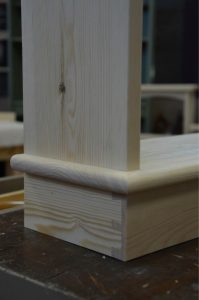 For me it was snugging up the last back panel with the vee-jointed T&G boards installed within the framework and turning the last twist on the clamp before I left the shop. I glanced back as we turned off the lights and caught a quick glimpse of the panel in the evening light from the castle workshop window. I wanted to take picture of what I felt, but I knew it couldn’t capture that swell of completion in my chest. Imagine feeling that way after fifty years of making things out of wood!

11 thoughts on “Finding Your Sense of Completion!”