It was something of a high-demand day for everyone. Lots of breakthrough-learning, digging ever deeper for the wisdom that defies the academic in us to pursue that side in life the emotions driving us can bring. We leave the analysis outside the door to rely on perception we feel from seeing then doing. Instruction is quick, simple and effective. Everyone seemed to quickly understand what sharpness was not after finding what sharpness was. Funny how that works. I try to imagine how they would all feel if I pulled out a machine router and dovetail jig to guide it and a machine that sharpens alongside what I demoed using archaic hand methods. 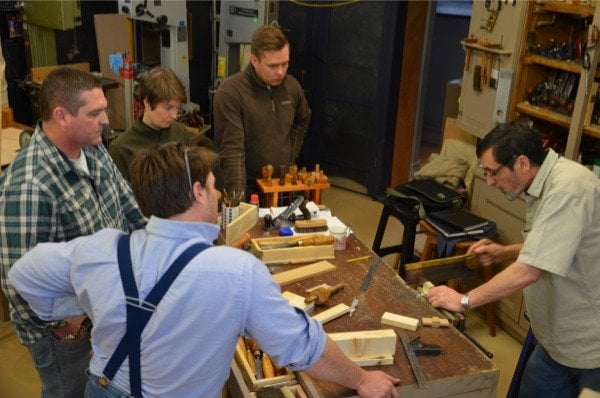 Methods that take no more than a few minutes. The proof of hand methods needs no comparison study and before long we were shaving wood, making joints and sweeping up because 5pm came too soon. Were they bored using hands to work tools that worked wood? Not that I could see. Were they disappointed they didn’t try the machine router and sharpen with equipment that negated their developing skill. Well, as we drove home up to Bangor mountain, my newfound friends from Sweden said the day meant so much to them. They were very happy. 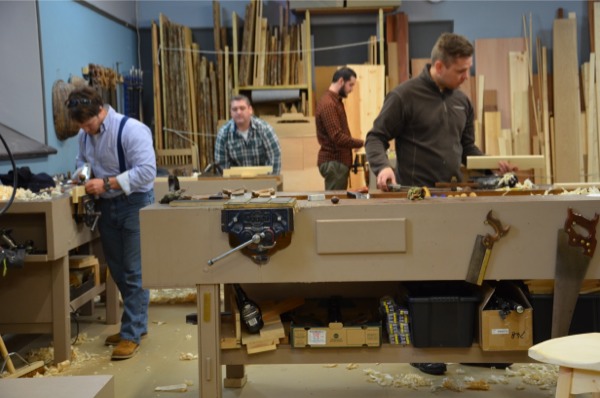 Laying so solid a foundation becomes critical to tomorrow. Without it we would have to remain unskilled and hindered in our path towards skilled, effective artisanry. As we build the foundation we learn more about what we are looking for in the wood, with the tools and inside us as individuals. We stop when the noises I hear don’t quite sound right. I here many planes planing and I gather everyone around the bench to deindustrailise the processes people use. I fine tune my demo to show what I did not do alongside what I did do. Soon everyone knows what to listen for, what to look for and what to feel through the tools they are using. Now, instead of just me feeling it and hearing it, they see and hear it too. A harmony settled over us as the planes now set well found clearer tones from working the wood. The tool makes sense and will make more sense tomorrow and the day after.

Hearing the occasional comments from different benches, I laugh inwardly to myself as they laugh at themselves outwardly. It’s fun to see the enlightened looks on their faces when the work starts to come together and unites with insight and understanding. Yes, there is a certain level of self doubt. A sort of wondering and self challenge as we consider whether we can really do it. I think we have all experienced that periodically. But here we are around the bench again and suddenly it’s making sense. Why does it make sense? It makes sense because we could see it and feel it, we could hear it and smell it. It didn’t matter which sense transmitted it or which one was used the most to help the brain translate it. What matters is it was translated and gave meaning to something we never experienced in that way before. 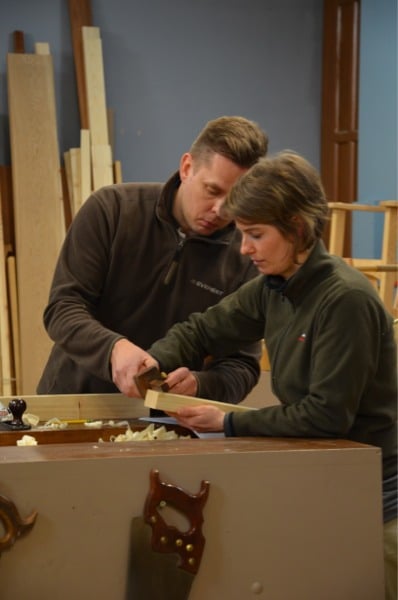 Today they know which chisel type they need, tomorrow they can make an educated decision on what to buy. Confusion from tool catalogue companies went ‘poof’. They can chop mortises with a bevel-edged chisel from China, Germany, India or Austria. They cannot cut dovetails with any kind of a mortise chisel. Which chisel should they buy? Well, now they know. Today they watched me take a plane I bought secondhand for the class and transform it into one of the best working planes they’ve ever used. It was a rusty plane, made in Sheffield, England in the late 1950s by an extinct company that no longer exists called Record. We flattened the sole, removed the rust and sharpened the plane iron. Tomorrow we will talk about retrofit plane irons and I will tell them that they don’t need a thicker plane iron because I think it’s a waste of money and future energies to sharpen it. We will look more at today’s work and reflect on the findings. In future they will be able to yet again make a more educated decision. That’s what I do in my classes early on. From here on, on a foundation of knowledge and understanding, we can begin to really build. I like that.