There are always implications in the physical that have deeper implications in life; beyond what we can see I mean. Our consumerism causes abandonment in every sphere of life. If it didn’t, landfill would lessen overnight and and the decision to buy a dining table would be determined by whether it would last last through a century or so and not mere and artificial cost. The richer in stuff we become, the more we toss out, the bigger the acreage for dumped stuff and the deeper our failure would be toward others without. At the car boot yeterday morning, my turn for a Saturday off, or an hour anyway, I picked up a few bits that didn’t break the bank at all, had no slick, triple-layer packaging and no shipping costs to boot. I almost didn’t go but was so glad I did cos there in a bucket of another man’s junk was an I Sorby miniature brace that was in great nick, almost unused and a very rare treasure indeed. This is not just a short-sweep swing brace but smaller in scale all around. I love miniature tools; child’s sized tools, not junk stuff. 75 pence wasn’t too much to pay and pulling it from under broken wrenches and bent screwdrivers was more a rescue mission for me. I had not seen that it was a Sorby until I got it home. I did like the obvious quality of the tool and the feel of age it had though. Anyway, I will keep it for a full kit I want to put together for my grandkids to use when they come over. Any #1’s going for a song anywhere? 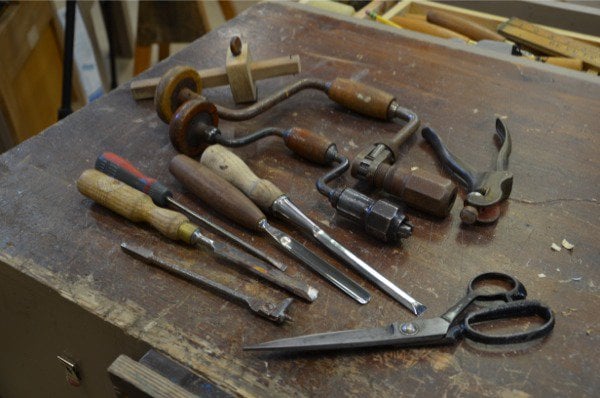 My newest addition is an I Sorby swing brace 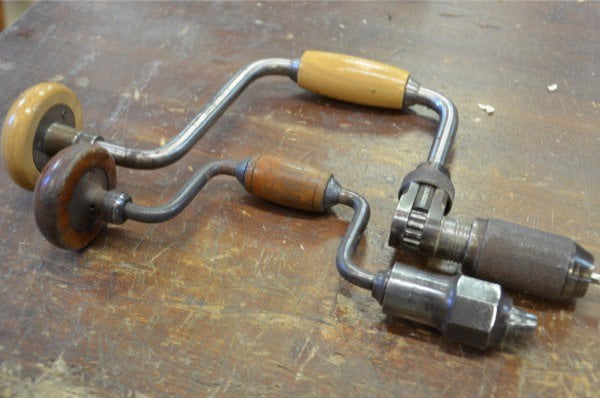 I bought a couple of gouges and a 1/2” socketed chisel that came to life in the workshop and then there were other pieces from different stalls that seemed like orphans needing a good home somewhere. The full sized braces are almost always there, but we still use them often enough in our work because they offer a good alternative to battery-powered stuff. 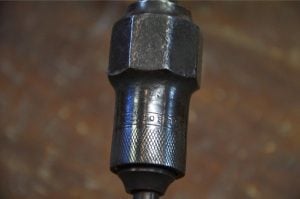 Counting the turns gives a guaranteed hole depth. One turn is usually 1/16” once the spur hits the surface and so four turns (called sweeps) takes you in 1/4” deep from surface to the bottom of the hole recess.

My mother was a dressmaker from being 13-years old when she began her apprenticeship in Ghent, Belgium until she was 70. Scissors were precious tools to her and I learned of their value and to sharpen and set them from working with her. One tap too many and the shears were too tight for a week.

Most people might not notice, but to her it mattered. These scissor types are often discarded models these days but I still like them. So, anyway, I started to sharpen them on a Trend diamond sharpening plate, the ones with the diamond pattern across the surface. I haven’t used this plate type too much because I like the EZE-Lap well enough, and also the DMT. Sharpening the scissors on the diamond patterned side I noticed that the diamonds were starting to sloughing off. I doubt whether I have used this plate for more than an hour tops since I got it so it was quite troubling for so new a product. I went back to the EZE- Lap plates to sharpen and they scissors soon worked like new again. I realise now that the problem may be with the area creating the diamond pattern bordering the electroplated diamonds, where there is only the zinc plating between the steel being sharpened and the steel plate supporting the diamonds and the electroplating. 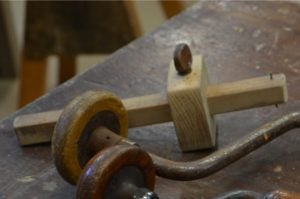 The marking gauges with wooden thumbscrews are among my favourites still. They lock well, better than metal and plastic, and they just last for ever. This one looks OK here, but it was ugly before I reworked the surfaces, backed out the pin and worked on the stock with my rasp and plane. By the way, the best way to back out the pin is cinch it tight in a drill-driver and back it out with a careful pull stroke. Someone had cut the wood right by the pin, so it was quite unsupported. I wanted to keep the pin so repositioning was a simple step of refiling a four sided point and using the pointed pin as an exact sized drill bit. This cleaned off the rust and as soon as the pin point protruded just a hair I stopped. I then hammer-tapped the pin through so that it bites securely to the walls of the hole to the remaining depth. This minimizes the risk of splitting, which can happen otherwise. 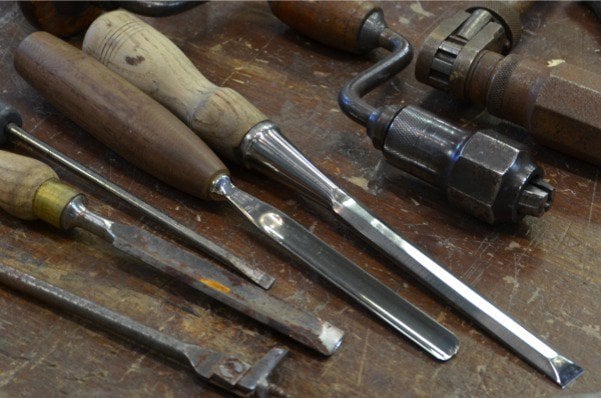 The Eclipse bronze sawset and expanding bit were common enough and very standard.

I’ll spare you the details of a cast iron pipe wrench and the Eclipse Junior hacksaw.