I listened to a man describe his advancing deafness in terms I had not heard described before. He said that in his case it was not so much that voices and sounds become quieter but that surrounding sounds becomes ever louder and that through the months and years those sounds make it impossible for him to tune in on the sound he wants to hear. In a sense, to him, it was a general and overall noise pollution whereby he was less and less able to focus. 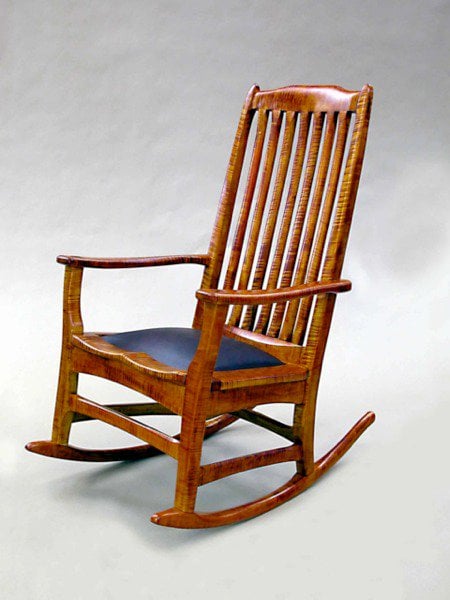 At The Woodworking Shows show in Dallas in 1995 I was mocked by reps from Bosch and Makita because I was demoing using hand tools. I was the only one in those days and this day it was a quiet Sunday close out and their sales were non existent. Losing interest in their booth they were looking for entertainment I supposed and took a walk. One big noise from Bosch made a loud laugh and shouted, “Now let’s see what have we here?” As he launched himself towards my booth. A small group gathered as I demonstrated hand cutting dovetails in under two minutes and soon the mockery slowed down as I could see that their uniformed shirts made them feel less and less comfortable. The dovetails were perfect, thankfully, as I passed them around and when the Bosch guys took hold of them they seemed, well, speechless. Deprived of their money-making toys, the reps stayed with the new interesting English guy and watched me cut some pretty healthy dadoes with a knife, a chisel and a mallet. The bottom of the dado looked good but a little uneven from my chiselling. “Should have used a Bosch” the big voice said, laughing. Well, sometimes things happen that just somehow flow together and I pulled out my Record hand router already set and waiting for action. It was one of those moments I could not have engineered and as I pulled the router across the bottom of the dado the wood peeled away like an onion peel. The crowd was bigger now and the reps stood alongside them gob smacked as for some reason the inner surface was a smooth a surface as any I had ever prepared. “Gentlemen!” I said, “Let me introduce you to the first ever cordless router.” The ice broke and humour filled the aisles.
Just as noise pollution often starts with sounds we barely notice, so too the birth of industrialism and the resultant invasion became pandemic in our culture. The results of it lead to deafness for some and, well, blindness for others. Just as noise pollution drowned out the man’s limited hearing to the point of deafness in a head filled with noise, and street lights conceal the bright and sparkling stars in cities all over the world, woodworking machines can disguise the art of working wood and the blind and deaf seem to laugh at those who see and hear with clarity of sound and vision? They did all enter into my de-industrial process without knowing that, for just for a few moments at least, I was able to turn out the lights.