I know you have mentioned that jointer planes aren’t needed much anymore due to milling being done by machines, however I have read some blogs where you mentioned how you like your Veritas low-angle jointer plane. Can you explain what you like about it vs a standard bevel-down no 7 Stanley?

To prepare for this answer we worked with several bench planes including a wooden jack and several metal jacks by various makers. The effort was well worth it and some might be surprised by the results, which were very telling indeed. I enjoyed the challenge of working with different planes and working with the film crew to produce a half hour video showing the results of working the different planes in 1 1/4″ wide white oak.

Below you see a wooden jack, a Veritas bevel-up low-angle jack and several Bailey-pattern jacks by different makers; planes we used throughout our filming session and experimental research 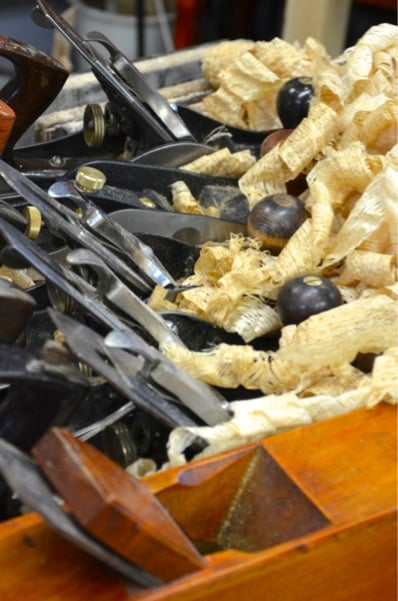 My background for working hand planes on wood.

There are not many joiners and furniture makers left that come from a background of using hand planes and hand tools as part of their daily work. I mean those who walk to their workbenches, around them and work at them for 8 or more hours a day 6 days a week and start their daily work by picking up a plane or a chisel and start making something with these tools. That’s how my work always starts and it finishes by putting them down after 8-9 hours using them, even now after 50 years. I mill my wood once, maybe twice a week using machines for no more than an hour tops, if that. The rest, all joinery, shaping wood, surface planing, trimming and fitting of parts, is hand work. In most cases woodworkers like carpenters, joiners and furniture makers since the 1960s shifted from different types of hand work to reliance on mechanised production using machines of some type to a greater or lesser degree. Today these methods are generally known as power tool methods meaning they use large and small-scale machines of one type or another. Generally, what they make is machined components that they then fit and assemble and sand with any one of many different sander types ranging from drum, stroke or strafing sanders to detail and random orbit sanders and of course the ubiquitous belt sander in all its many diverse forms. The men I trained under as an apprentice never used machine sanders on their individual work but used standard smoothing planes made by different makers and #78 and #20 rebate planes to clean off the machine marks left by the planing machines and spindle moulders. Rarely did they ever use anything longer than a #4 1/2 and #4 smoother because all stock was roughed out of 3-4″ thick beams 8-12″ wide and 12′ long taken from stacks of a hundred there in the lean-to buildings outside the workshop. Subsequently we then dimensioned and shaped the parts on different machines. All of our work was always in house. Hand work seemed to me to diminish in most workshops over the ensuing years and so after my journeyman years I decided to stay more with hand work and not pursue the machine-only set up. I still have no regrets in choosing that route. 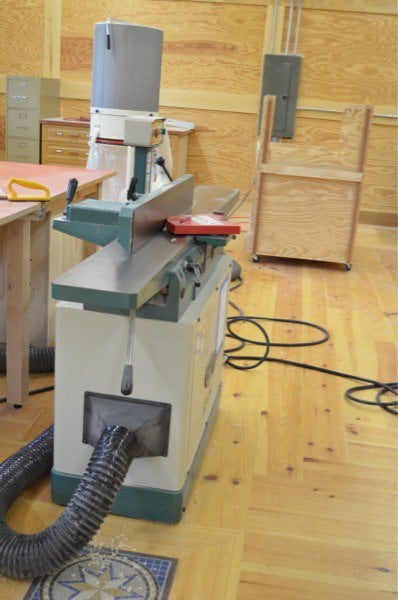 Machines have gained ground through the decades, primarily because of the ease they bring to woodworking in dimensioning and machining stock, but also because they require minimal skill.  The result since the 60′s of course is that we have seen the demise of tool making companies like Record and Stanley and several others who were once known for the production of all types of planes. To replace them we have seen new companies emerge and develop their own ideas. Companies like Lie Nielsen in the USA, Quang Sheng in China and Clifton from England all of whom now present their repro models of the old Bed Rock versions of the Stanley Bed Rock and then we have the Canadian Veritas on the other hand who came up with its own innovative alternatives to challenge the status quo. The interest and subsequent resurgent interest in hand tools caused many to reconsider using planes originally conceptualised in the 1700s that were gradually abandoned through the 1800s and left us void until just two decades ago. Heavy-bodied, low-angle planes used mostly by British cabinet makers of that period were preferred as mitre planes for perfecting mitres and cross grain cuts anywhere between 90-degrees and shallow slopes. These planes were mostly short-soled planes the length of a smoother but sometimes a little longer; most often in the form of shorter planes referred to as block planes. The common maker of the USA was of course Stanley Rule and Level who aggressively defended its turf by buying up as many oppositional plane making companies as possible. Stanley was also based here in the UK’s Sheffield factory, with only a short distance between itself and the Record factories. The older long established and highly respected companies manufacturing different plane types ranging from moulding planes to wooden ploughs and low angle planes then known as chariot planes and mitre planes also lived in what was recognised as the steel and tool making capital of Britain. 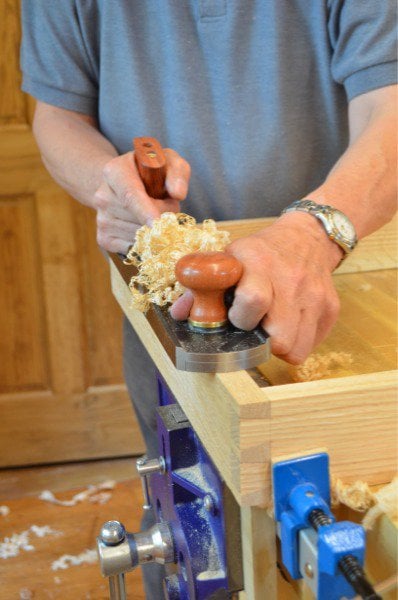 In the last two decades we have seen the bevel-up planes repopularised with added developments and finer adjustment mechanisms that many have come to admire. The fact that they are well engineered however doesn’t always mean that they tackle the grain we work any better or any differently than the planes of old or indeed that they are much if any better at planing wood than bevel down planes, even with thin irons. And here in lies my answer to the question. Bevel-up, long or short planes have a place of limitation in the arsenal of planes. For bevel-up planes to work as shown by tool sellers at shows they must be pristinely sharp. 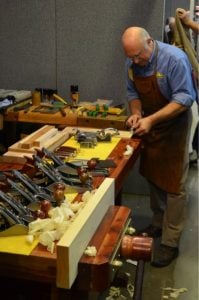 That’s a must and it’s not hard to achieve and maintain at a show. It’s the same at the workbench for real woodworkers too. In my view the type of edge sharpness I need at the bench for a bevel-up bench plane to work effectively AND efficiently is the same for a bevel-down plane, but if a bevel-up plane is going to go wrong in the grain it often goes very wrong big time. More so than the bevel-down planes for reasons of physics. When a bevel-up plane begins to tear out the grain it can and indeed does rip the grain out at the very root mercilessly and not rarely but commonly. Unfortunately, at shows, where salesmen sell planes, they never show this plane reality even though this is the reality of why bevel-up planes differ from bevel-downs and why they never replaced the bevel-down planes through the centuries or came anywhere close to them. Now then, that said and out of the way, the reason I do like them some of the time is for the relatively restricted practice of low-angle work, edge-grain work and jointing boards for lamination. I find that it is practical to keep these planes available and sharp and dedicated to end and edge-grain work. I have found the Veritas bevel-up range of planes from the tiny apron planes and block planes to the long jacks and jointers unparalleled if so dedicated. When I am jointing edges for tabletops, I work between bevel-ups and bevel-downs equally. I admit to the purest of joys of using a new and pristinely sharpened bevel-up Veritas jack plane across the end of any hardwood you might care to name. But I reserve the same for my I Sorby 5 1/2 and my Scottish Panel plane too. A fine and marginal difference does exist when using a low-angle bevel-up plane because of the inline point of thrust that centralises the pressure on the cutting edge of the blade. This then serves to more equalise the pressure above and below underside and top of the bevel with a mass of steel behind the very edge. In bench tests this week we tested out the two plane types of standard bevel up and bevel-down planes in the 5 and 5 1/2 jack sizes. Whereas the physics of a low angle presentation with a thick iron in a straight-soled heavy plane might be deemed to make a large difference in finding the sweet spot of planing end grain and such, we found that if there is a difference we couldn’t discern sufficient significant difference. In our testing we found the bevel-down plane actually felt lighter in the cut on or along the grain and could discern no difference in quality of cut or shaving. We sharpened both plane types to equal standards and set both planes to remove the same thickness of shaving; generally one thousandth of an inch. 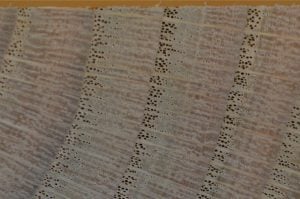 We have found the bevel-up planes work well on cross-grain cutting but again not substantially different than the bevel-down plane and certainly we have not found planing along the grain produces any improved difference at all but that bevel-up planes seem often highly problematic in general and especially wherever we encounter reverse direction in the grain that rips when the angle of the blade presentation on the low bedded angle is commensurate to the angle of the grain undulating and rising periodically to match that of the bed of the plane.

We also checked the angle of presentation of the cutting iron the wood in different plane types and makers and found them to be within 2-degrees of consistency somewhere around 45-degrees. 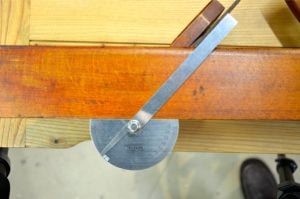 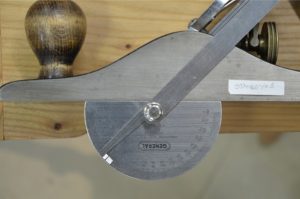 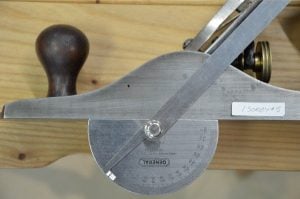 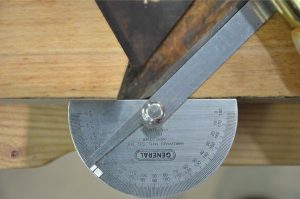 I think my comments in my videos are the result of picking up a well maintained and extremely sharp plane to tackle what is traditionally a difficult task when edge joining or end planing grain. My workhorse planes are bevel-down planes that may or may not have been sharpened at the point of my changing one plane for another. Had I sharpened my regular bench plane and picked it up afresh from sharpening and used it after a used bevel-up plane I would most likely have felt the same thing, which is what we felt in our experiments in this video.

I switched out a thicker Veritas iron for a thin Record iron and found it performed equally well in their standard bevel-down pane. 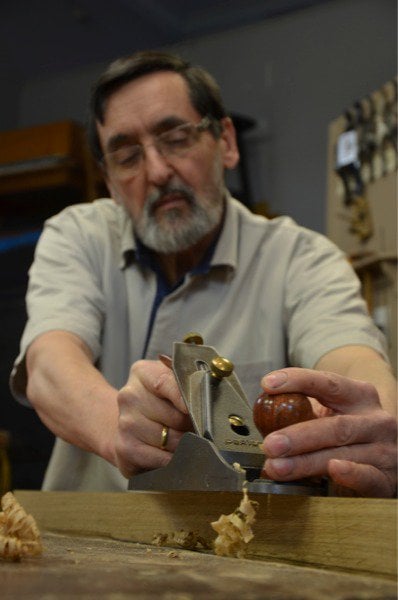 I feel we were trying to test out the planes non scientifically but honestly and the results were very real. It wasn’t only my opinion either. Both Phil and John felt the same as I did when they took the two plane types and put them to the test. We used three #5s, a Stanley, an I Sorby and a Woden and two #5 1/2s, a Record and a Stanley. They all performed equally well. I felt my I Sorby planes both performed best, but only marginally better than the Stanley #5, which matched the Veritas Jack in performance.

Tomorrow we will be showing the video of our findings for you to watch.