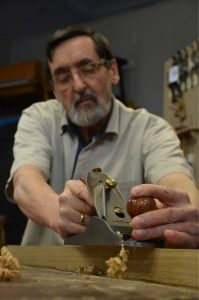 There have been many questions surrounding bevel ups and bevel downs for a decade and more. My experience tells me many things different than I read elsewhere and it’s on my experience I rely the most. My recent blog post on this subject has revealed some controversial issues surrounding the modern-day woodworker looking for answers in pursuit of real woodworking. When you can’t make your plane work well, woodworkers have difficulty knowing whether buying new might be the solution. In reality, for the main part, all they need is a sharp edge in a well-oiled well set plane. Not knowing whether to buy new, pursue old, add a bevel-up or down plane or two all seem to add to the confusing mishmash of modern-day misinformation. The reality is simple. More simple than most people realise. 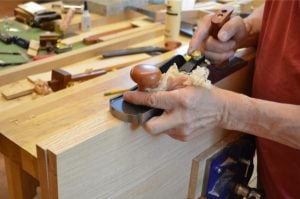 My quest is not to promote rejection of more modern makers, except those who ended up reneging on their responsibilities and let the standards badly slip, but to ensure that woodworkers understand they can master just a few very basic skills to become masters of the plane.

Why did they make bevel up versus bevel down? What is the essential difference in performance they are trying to achieve? Is it that with the bevel is up the angle to the grain is greater and therefore better for cross-grain cutting? I use primarily Stanley/Record bench planes but I have a Veritas low angle that I just got but haven’t use much. I have a No. 40 scrub plane that is bevel down.

The new video launch will help you see at least some of what I see as I work in my everyday as a working man.

In our trialling of these two plane types, bevel-up and bevel-down, we will take no sponsorship because really there is no one to take sponsorship from. I do hope that in doing what I have done I have in some measure preserved the integrity of the designer engineers who designed and manufactured them. There can be no doubt, what Leonard Bailey designed in his Bailey-pattern range of bench planes stood in the face of mass opposition for half a century because woodworkers were content with the wooden bodied counterparts of the day that worked very well. Gradually his plane became accepted by craftsmen to the point that for the next century it was the industry standard. Why? Because it worked so well.

We enjoy working as free entities producing video that preserve the integrity of our craft. Answering these questions and making videos for instruction is key to securing the best of the past, uniting it with the present and using it for the future. 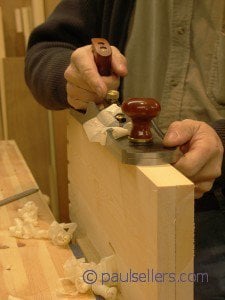 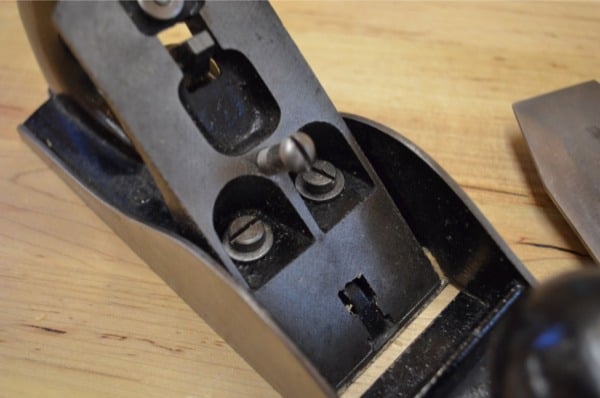 In my purview at the bench, when I stand and stare at the plane, look inside its internal gubbins, something tells me this low-angle plane is better equipped to the task and challenge because of its low angle, thickness of iron, weight-in-the-throat, inline support of mechanical adjuster mechanism, mass of steel because of low-angle presentation and so on. In other words I <em>want</em><strong> to believe that by its very appearance it <strong>will</strong><em> be vastly superior in performance. In reality however, at the bench, there is barely (if any at all) any difference between a low-angle bevel-up and a high-angle bevel-down, whether wood or metal, new or old, straight from the box or from eBay once you sharpen and fettle the planes. So my <em>wanting</em> to believe in it’s better presentation angle makes no difference except for me to put more effort into the ‘one-I-want-to-beleive-in’ plane, which I avoided for the sake of the tests we did. Remember it wasn’t just me that tried the planes but two other craftsmen too. So my loving the bevel-up Veritas makes little difference. I can’t alter the fact that a 30-degree bevel on a 12-degree bed incline plane is only 2-degrees difference between and 44-degree bevel on a bog-standard Stanley or Record plane. Having now proved unequivocally that 96.9% of all planes present the actual cutting face and edge at the same angle, we can focus more on the performance found if any in different planes. In the stroke the low-angle, bevel-up plane felt a little more hefty and whereas there was something a little less ‘absorbing’ in the low-cost alternatives, I did definitely get equal results of quality from the inexpensive planes and I felt that the #5 Stanley gave me the least resistance of all in the cut. It was also the lightest and easiest to use and I achieved excellent results consistently stroke after stroke. Of course none of this means you shouldn’t own a low-angle bevel-up plane. I think people should, as and if they can afford one, and even if they don’t need one but would like to own one. But I certainly would advise any of you reading this not to feel at all ill-equipped or less adequate if you don’t own such a tool as a low-angle block or bench plane. They are just nice planes with smooth handles and nicely engineered parts. This work is more for that massive percentage of woodworkers who might be led to believe it’s an essential piece of kit that takes care of stuff the basic planes can’t handle when they actually do it just as well. If you can’t afford a nice looking plane, don’t sweat it and certainly don’t feel inadequate. You don’t really need it. Working wood is not a dress parade where fashion dictates what you wear and how, when and where.

I think that one good reason wooden planes were challenged by cast metal type or even those very fancy dovetail jointed metal types was that the steel industry and engineering brought compactness and centralised weight surrounding the very cutting edge of the tools. They could also be mass manufactured in a few minutes, which really brought the cost and the wait time down. I doubt whether most many cast metal plane takes more than a few minutes of actual man hours to make. the rest is usually in the packaging. Beech bench planes when used for mitre work with shooting boards could be somewhat cumbersome and awkward because of size and especially if you are not used to them. On the other hand, small wooden smoothing planes were too light with less concentrated weight in the body at the point of thrust. The very compact low angle chariot and mitre planes out-performed the wooden ones as would say the Veritas small bevel-up smoothing plane today.

Oh, and we also weighed in the different planes to see what differences we were dealing with. The comparable weights were very similar. We checked every angle and that was a greater surprise to me in that few planes varied from the 45-degree pitch. Norrises and Baileys proved equally angled and so too wooden jacks.

Please watch the video if for nothing else to clear up ambiguity, but also just for entertainment. We did enjoy the few hours in trial and error researching and making it and hope you find it as interesting and informative as we all did.