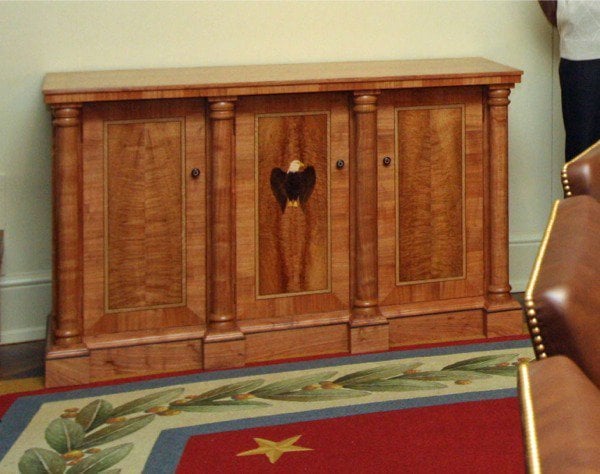 To show you the beauty of mesquite as a furniture wood, here are the pieces I designed and made for the White House in 2008-9. Two identical pieces for the Permanent Collection in the Cabinet Room. Stunning wood!

My wife and I were reminiscing about past years and ‘doing’ craft shows to sell our furniture and other wooden products we made through some of my earlier years and especially our early days in the US. This started in 1987. Those were interesting days out west. Yes it was a culture shock, but I loved what we did.
The ranches surrounding my home were ranches where I harvested mesquite trees for wood were many miles square, one was 36 square miles owned then by a man named Happy Shahan near Bracketville who built the Alamo village where they filmed the Alamo film. Another property was owned by Dolph Briscoe who owned a million acres back then. In that season I owned a 1952 one ton flatbed truck, a very old Subaru station wagon and a home made trailer strapped to its bumper with a loose welded chain. Between these three vehicles i harvested wood for about four years. I drove through several gravel river bottoms into a wilderness as wild as any in the west to cut trees with an echo 16” chainsaw, a comalong and a few ropes. Back then I never owned safety equipment because i had no money for it. The truck was always filled to over full and never failed me in hauling my rough wood. The Subaru with it’s four wheel drive pulled the trailer filled with wood several times a month and I felt deeply indebted to both vehicles bringing in my supply of raw material. I understand the US law for the right to bear arms even though it was illegal for me because I carried two guns to protect me from everything from tusked feral hogs weighing upwards of 600lbs to rattlesnakes, water moccasins and of course the risk of mountain lions. I always worked alone except when i took my father with me if he was there on holiday. 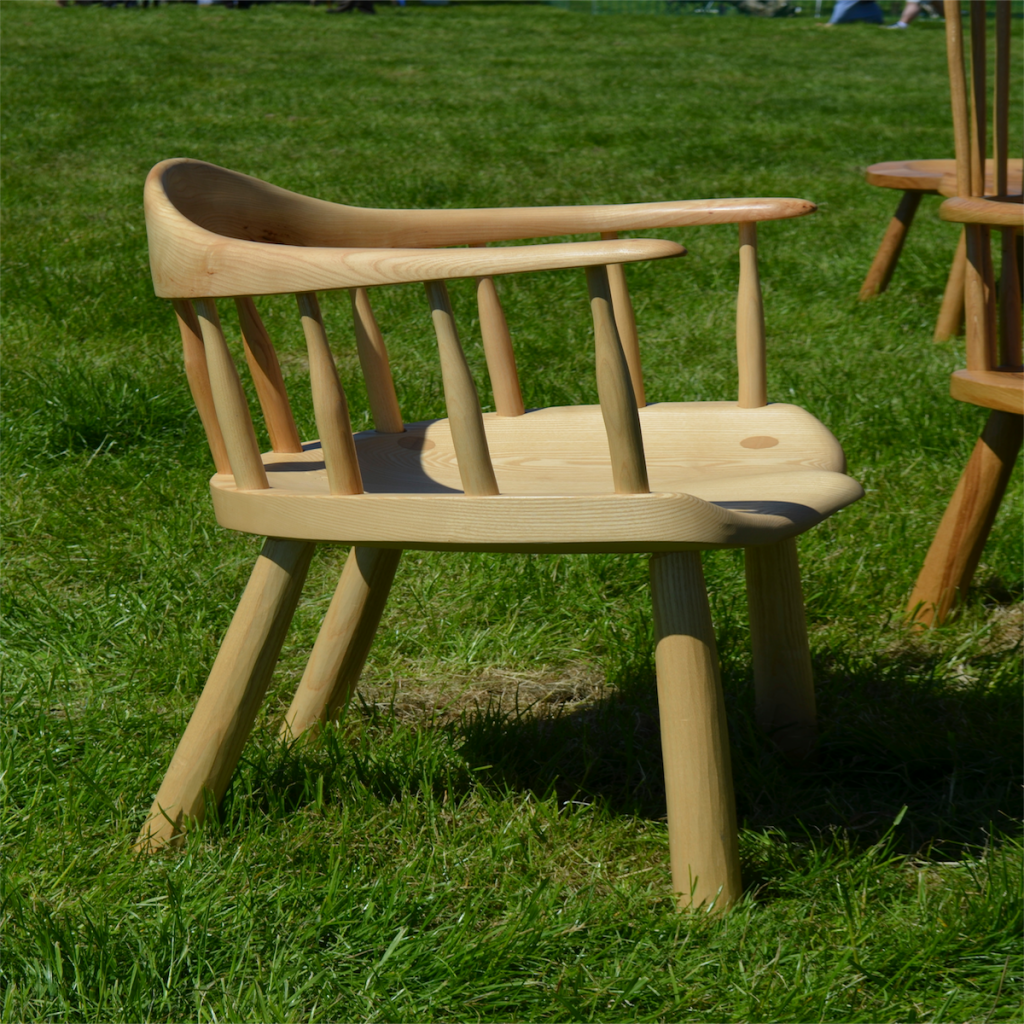 I went to four craft shows a year and took my furniture. My booth was often up against the one-by pine guys who made ten times what I did because they brought to market what I refused to. My coffee tables and rocking chairs were all hand jointed and fully together with traditional finishes and were intended to last about 150 years. The guys next door had a 30’ horse trailer lined with bins filled with parts ready for assembly with a Kreg pocket hole jig and air nailers. You ordered at the front from the line on display, paid the lady at the register and picked it up ready to go at the end of the show. Whatever you bought could be carried under one arm no matter the size, such was my competition. My coffee tables took to people to lift and that’s not always the best selling point at a show. 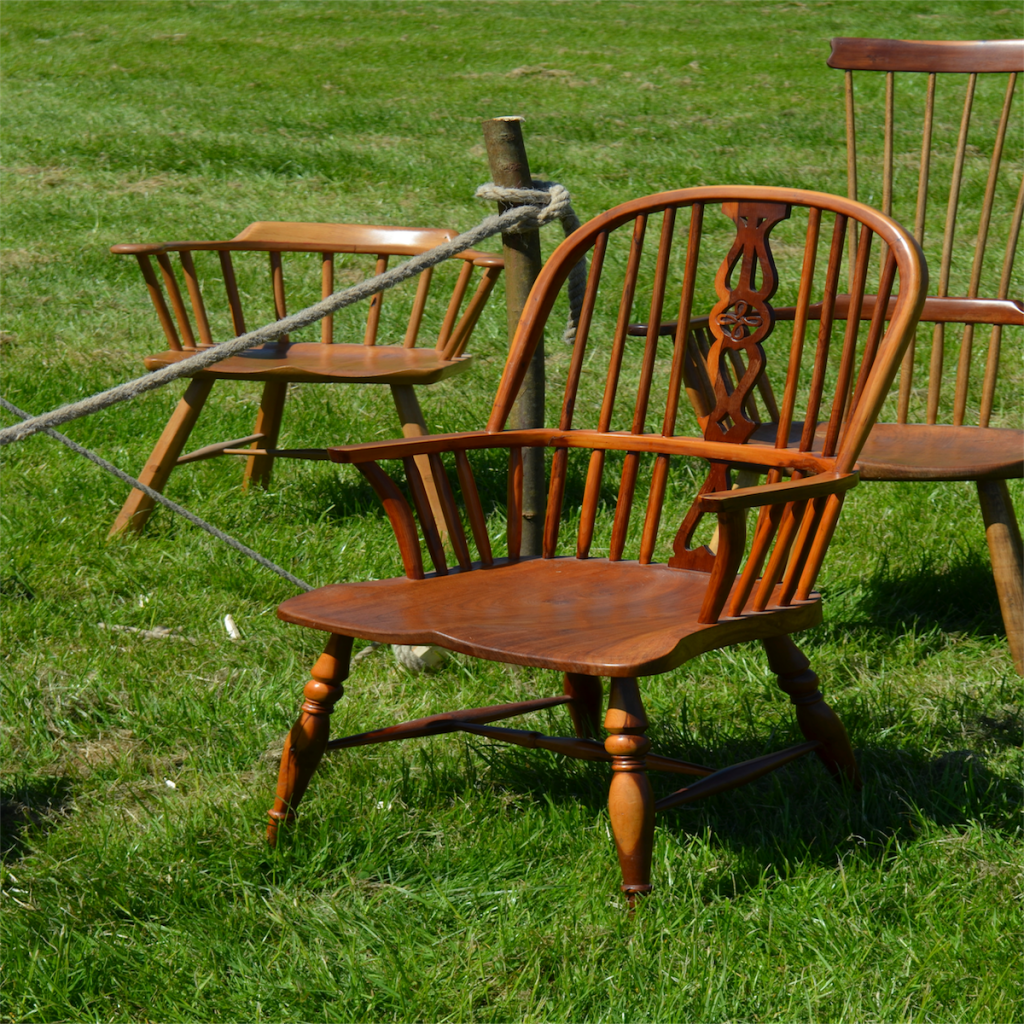 Most people attending the show didn’t realise that i often worked for three months to get stock ready for the show. As we neared the show we would be out of money to buy food. On the first night of the show we stayed in a cheap motel out of town (feet stuck to the carpets). The next night we moved nearer in on the strength of the first day’s takings and on the Sunday night we upgraded again for the same reason. At these shows we would take enough to pay all of our bills and live for the next two or three months. Our orders for new furniture came home with us and I would make custom pieces. This has been life I wouldn’t trade for a “real job” no matter what. It wasn’t easy but, you know what, I was always home, I was always with my wife and children and saw each one of them grow up every day. Yes it was lifestyle and we made it and paid every bill.

18 thoughts on “Working for Yourself – Love It”