Last week I bought a 12” handsaw with 9-ppi but not just because I wanted it, I thought you might be interested in it too. Not a serious saw? Oh, I think so. What use can that be? 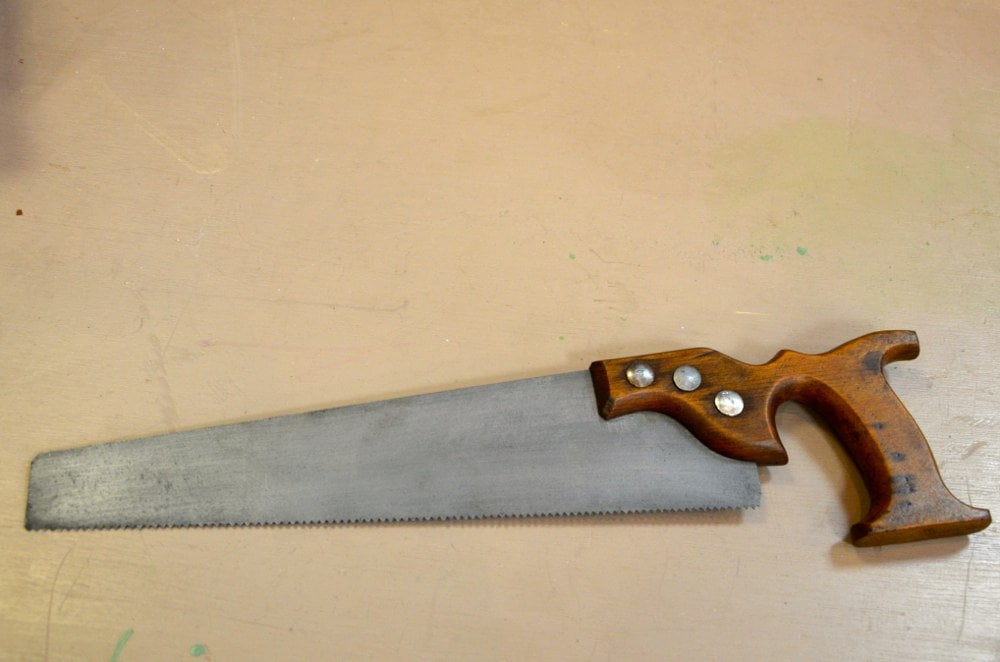 To be frank, I wish that someone would make saws this size for serious users and uses. I am not a small man but I would use one. If I were small I would make one from a bigger one. It’s all too easy to say what cuts a lot cuts a little, but I can think of many people who would benefit from using one of these including more slightly built men and women, children of all ages, people like me for use at the bench, for tasks that require thinner stock. I could go on.

Well, is it a toy or is it real? Who would have used it when it was first made? What was it used for? Actually, this saw is not that old, although it is actually a serious saw in that it is spring steel, hard, tempered teeth and with teeth large enough to cut serious depth, what look like studs through the handle with a slot head for a screwdriver are nothing more than press fit; they don’t screw or unscrew at all. But this is a proper saw. The teeth tell me something too. The rake is very passive. 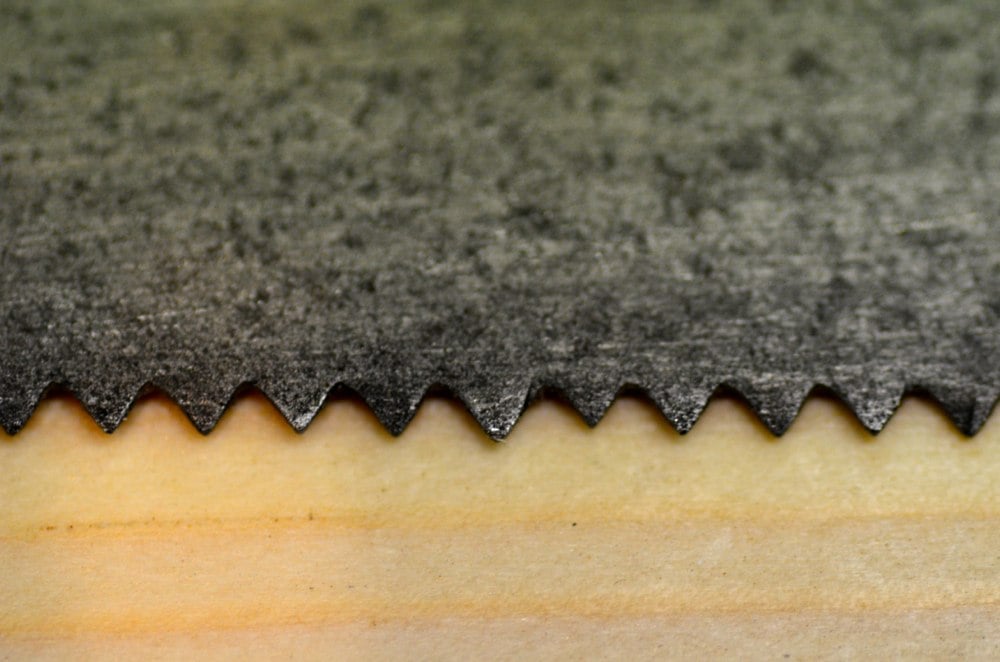 The saw is well used and without kinks or bends in the blade. The handle is well worn but a bit shapeless.

I tried the saw without further ado as soon as it arrived, as I do all saws. I want to track every detail of its past as near as I can. I do the same with planes. I look inside for shavings and traces of wood in the throat, that sort of thing. Anyway, to cut down to the line (shown below) took 52 stokes with the controlled, even, forward-thrust pressure used with western saws. Too many, but, surprisingly, the saw didn’t really balk at the work and this was because of the passive front rake. If I were to sharpen a saw for a younger woodworker I would most likely use smaller teeth or develop a lesser rake as in the case of the saw shown. Probably not so passive as this, but somewhere between this and the more fully aggressive rake I might prefer on my ripsaws. 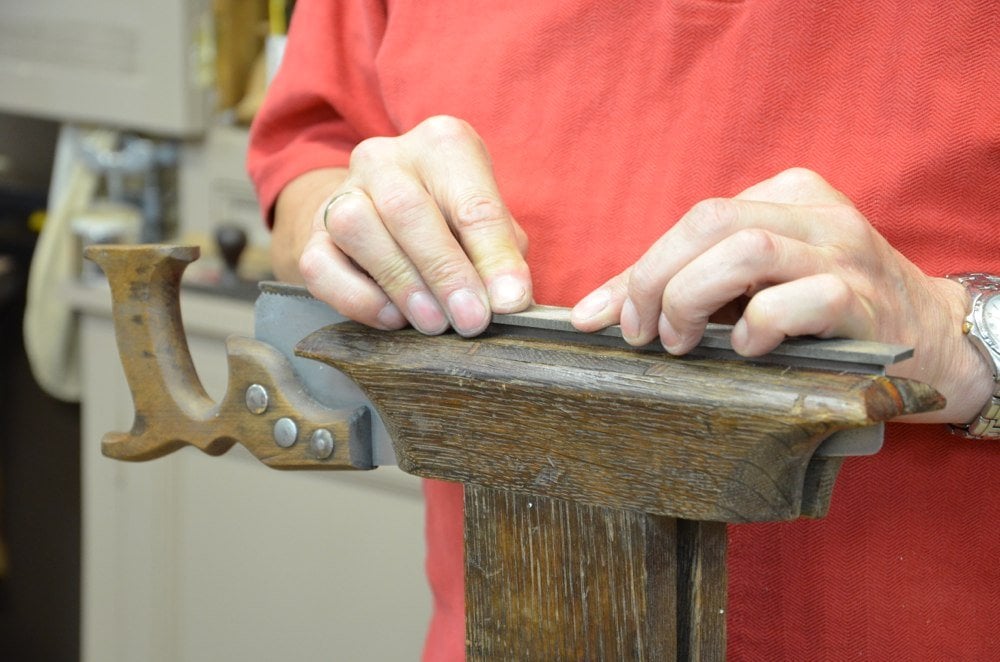 I topped the teeth (jointed USA) to level them, which then guides me for evening them up as I reshape them to the configuration I want for the work it will be used for. Three strokes worked in this case. Filing the teeth then is a question of shape and tooth pattern.

It took three strokes to each gullet to shape the teeth enough to get to each tooth tip. 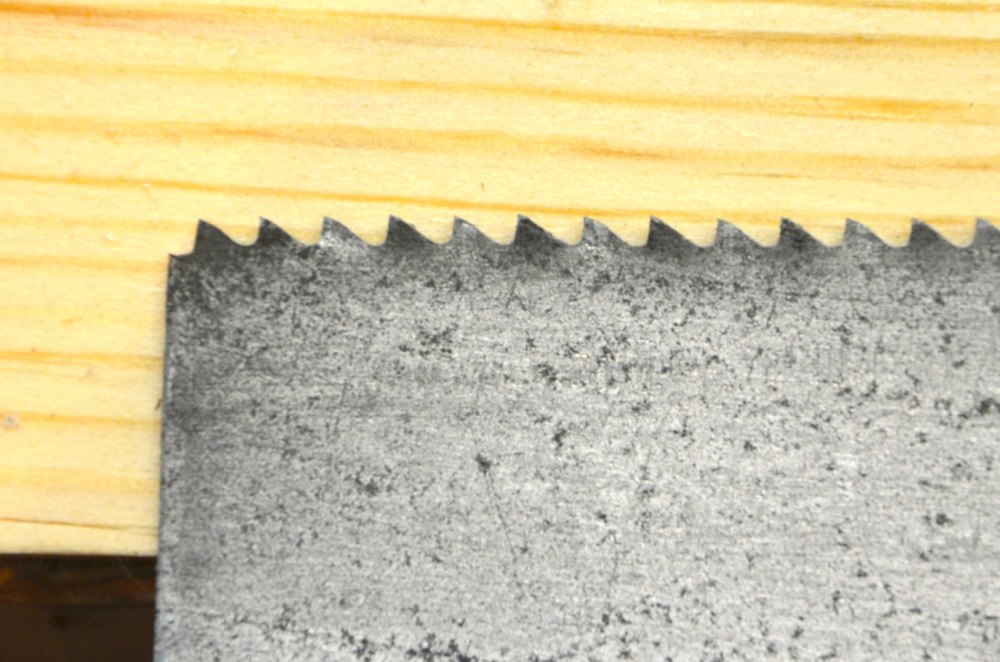 I tried the saw a second time and this then took 16 strokes to get to the line. 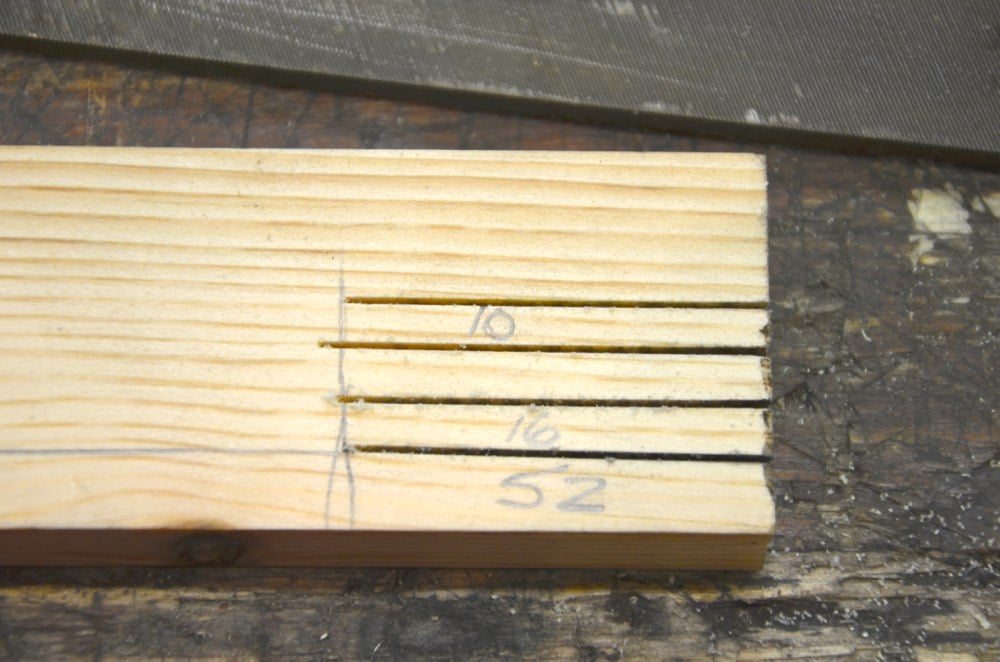 Once this was done I added a micro back-bevel for strength and then all I needed was a little more set. I set to 20-ppi because that’s all I need for dry and thin wood.

Below: Teeth before new shaping at the toe end

Below: After shaping and sizing

Now then, just who would use a saw like this? I usually look at a saw like this as I might say a #3 plane and say to myself, “Small saw, small-statured person – perfect unity and harmony.”. It’s a good strategy that many women, men and others who are of a smaller build will find a real advantage in using smaller tools made specifically for them. Children especially need smaller sized tools that parallel their size as they grow up into the larger, more full-sized tools they need. Veritas created a smaller, bevel-up smoothing plane with this criteria in mind. I would that they or others would come up with a 12-16” handsaw. 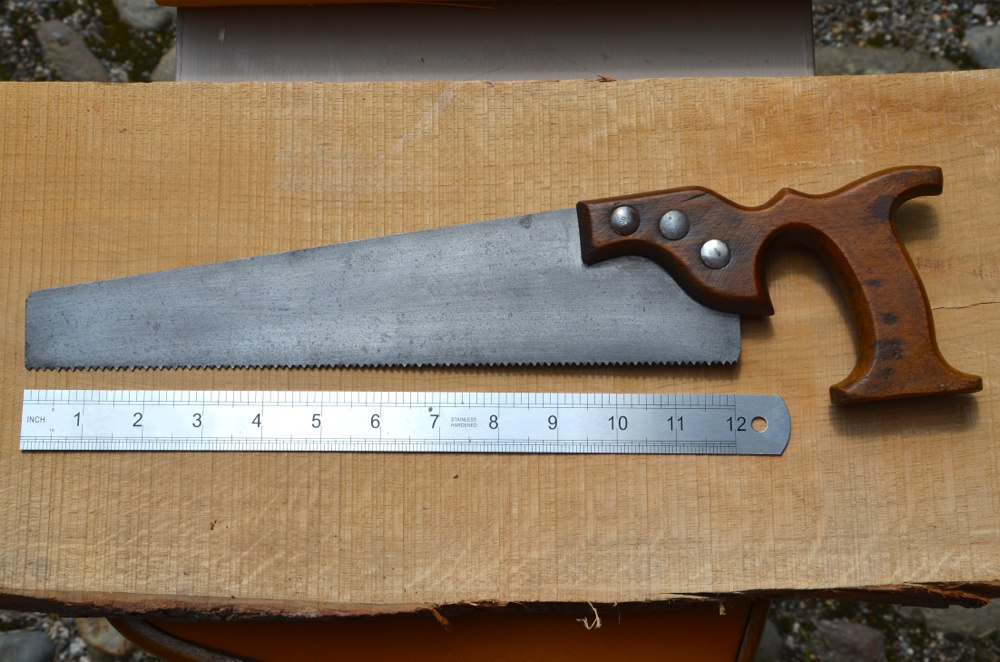 In my experience there has always been different levels of disparity in ability levels in the ranks of woodworkers regardless of gender. That said, it is only in recent decades that woodworking has been a more open option for everyone and anyone and though those who were restricted in decades past are no longer prohibited by the same archaic dominances of old, they are often disqualified by oversized hand tools that just don’t fit for several different reasons. I would that tool makers making tools would design for new users either beginning in woodworking and for those who need smaller tools to be made for them or at least found for them.

Back in the more regal and royal realms of British woodworking history, and when woodworking was a male-only craft, the ‘gentle’ men of more noble births discovered that they liked to work with their smaller-than- common-man hands; small hands, unmuscular shoulders, arms, hands and chests meant they needed smaller sized hand tools scaled to fit. They asked for and got the hand tools made for them and this included all the tools used by the stronger working men of the time; hence the term gent’s and gent’s tools. Such was the power of wealth and certain realms of dominion for the land-owning gentry. What restricts the same movement today is as always demand, the strategies and politics of economics and such like that. Perhaps in decades to unfold more favourable change will come, I doubt it, with the support to create, and proportionally sized tools will be more readily available.

I used this newly restored saw on some thinner 1/2” thick redwood pine and some 7/8” thick pine. Not tough stuff, but harder than all the pines available in the USA. It sliced very readily and as well as my longer saws, but it does of course take twice as many strokes. I’m used to full length saws twice as long and more, but I wouldn’t treat this saw as an inferior saw or kid’s stuff even if it is more than ideal for serious children’s woodworking. As I said, I think it would have been great for my children when the were young and for some of my students today.

23 thoughts on “Are Small Saws Kid’s saws or is There More to It?”