Dismantling furniture gives meaning to the present and so we better understand out craft and piece together the missing pieces in the puzzle of what has gradually disappeared. I like finding chisel cuts and plane marks because they reflect a richly textured craft culture evidenced in honest workmanship. It’s something machines will never leave or if they do it will likely be in burn marks in saw kerfs and routed moulds and dadoes. I watch a machine cut the wall of a recess and it often leaves a perfect square wall straight as can be. It’s boring to watch and has no character really. Every cut comes out the same and when it’s done the machine user knows he didn’t do it. I don’t believe we will be undoing CNC router-cut work and feel too much at all. Why? There’s no character to it. It has only the dullness of machine passes and not the record of a man’s hand as in this table.

When I open up joints and dismantle pieces for repair or because I want the wood for something else, I can spend many hours recording and researching to learn from my mentors in previous centuries. When one thing touches another it leaves a trace of itself on the other and in woodworking it’s no different. One of my favourite aspects of my work is undoing the work of my predecessors in woodworking. I think last week I mentioned that John bought a four foot square mahogany table because I told him that the wood alone was worth many times more than the £35 they were asking. I was glad he did. John dismantled the physical parts yesterday. Today I dismantled the methods and examined the cuts and slices and traces left by the tools in the wood. The parts were as a message pad to me. Grain, cuts with sharp-edged tools, different signs told me how every cut was made and also about the tools used themselves. What I take for granted is not necessarily obvious to everyone and I realise that. I can tell the difference between a single bevel knife cut and a two bevel knife cut and the difference between a knife wall and a cutting gauge cut too. Spokeshave cuts and plane cuts and chisel cuts are all identifiable if you know what to look for and I can tell when pre cuts are made to facilitate additional chops with a mallet and chisel. In other words I know how craftsmen created things because of my own working as a master craftsman of 50 years. By this I unlock the past and understand from silent works the sharpness and dullness of their tools, the direction of cuts and the choices of techniques. Let me walk you through this just a little here. 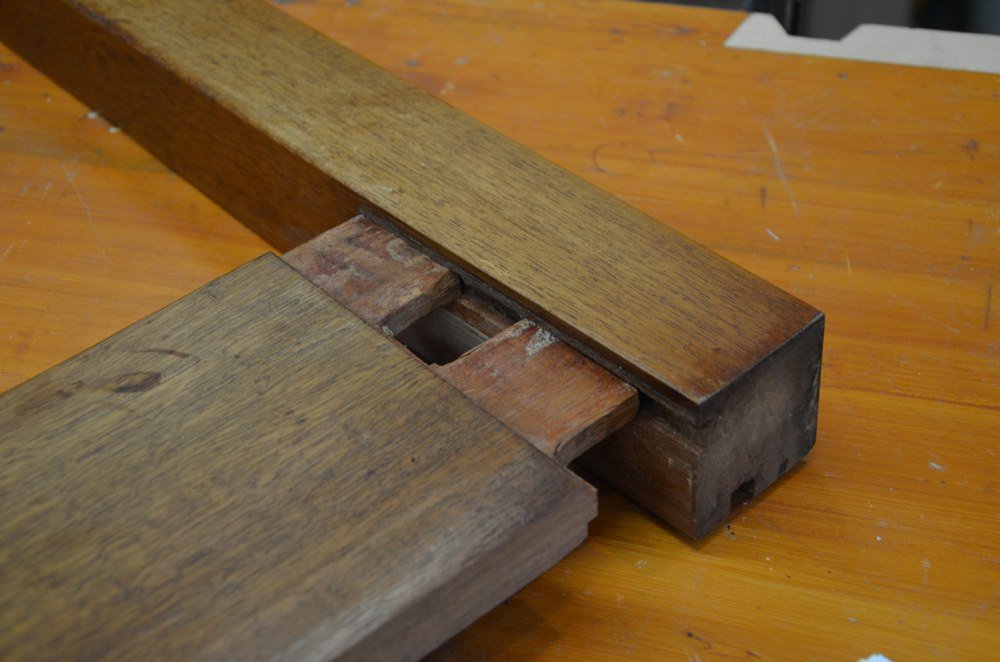 The joinery on this table is simple to make and specifically designed with great care and insightful craftsman knowledge. Firstly the joinery is traditional. Twin mortise and tenon joints create the typical intersecting of legs and aprons to form the framework undergirding the tabletop and drop leaves. The twin coplanar tenons are at first glance perhaps less pristine than you might expect or even like or admire, but in essence you can’t help but respect the standards as you see the economic steps he took to make the joints interlock with tightness and to very specific measurements. For instance, the tenons and mortises were all 13/32” – a small amount over 3/8” and of course a non-metric 10mm +. The faces of the tenons were planed and the two cheeks dead parallel with a vernier. The surfaces look rough on the inside but that’s more the glue residue and not the inaccuracy of tool work. 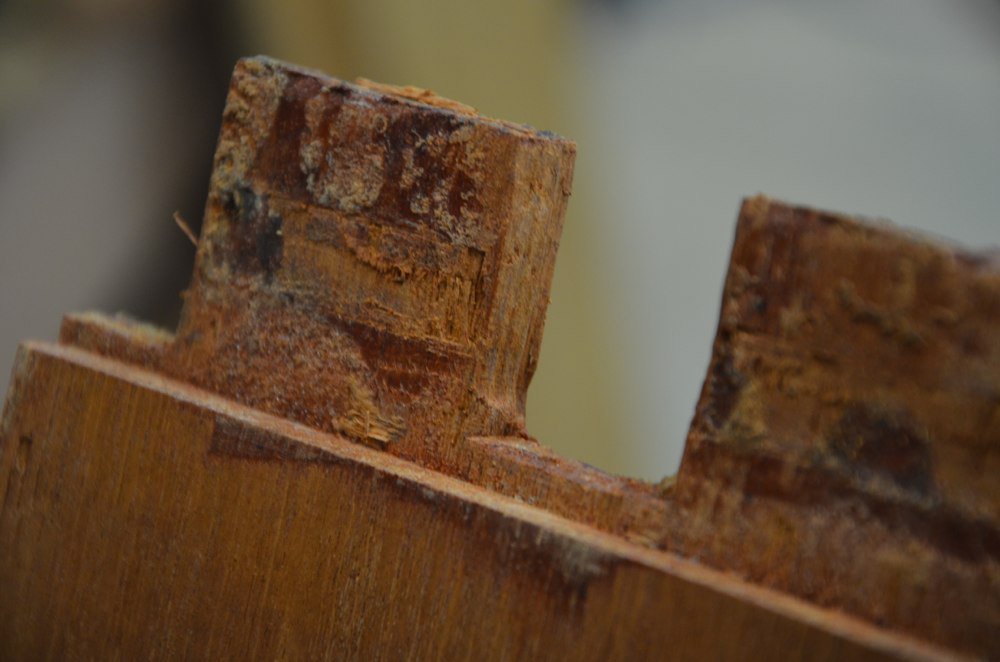 Look at the rough chisel work between the two tenons. This was of course pre-coping saw days but not pre bow saw. In this case the two tenon widths were cut down with a tenon saw and then a 1” firmer chisel is used to chop from each side by first placing the tenon cheek on an elevated block and chopping. First removing the waste with a rough cut say 1/8” from the line reduces resistance when the final cuts are made and hence the cut through is made with a single blow from nosed and then a second meeting cut from the other. No clean up took place. 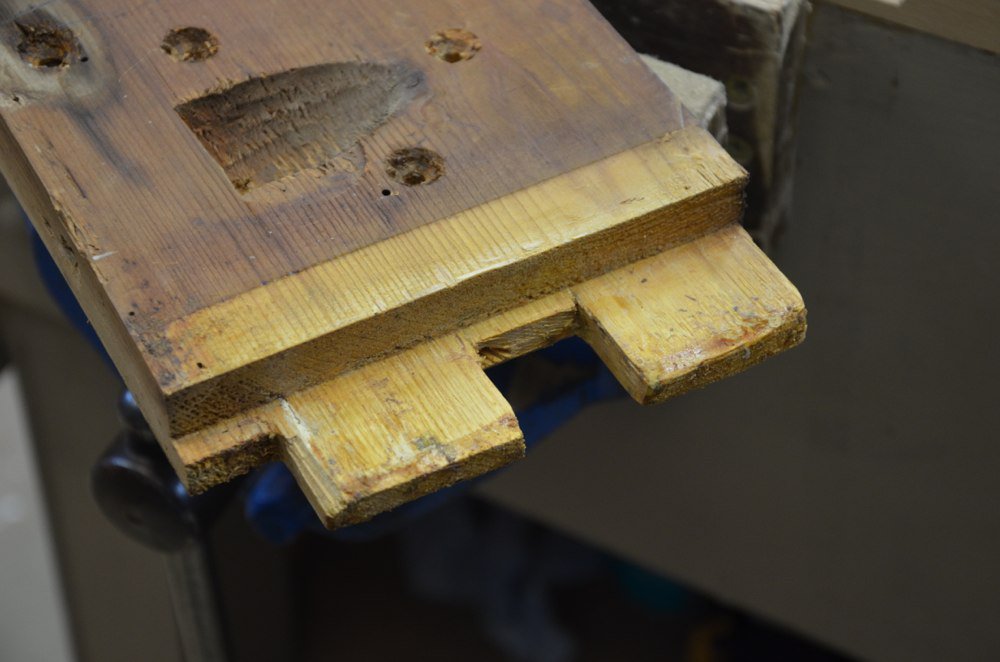 Now let’s look at the width of the tenons. On all of the tenon widths there is compression bruising that shows that the tenons were deliberately cut over width by a surprising amount. In this case the depressed internal surfaces are 1/16” compressed. That seems a lot to me, but then I noticed the compression was deeper on the two softwood aprons and a lot less on the hardwood mahogany ones where compression is less. So, this tells me that the craftsmen made conscious assent to factors inherent to the different wood species and judged the work accordingly. What was he considering? He judged compressibility, spring, strength, fracture capacity, denseness, hardness and perhaps things I might not yet know of. 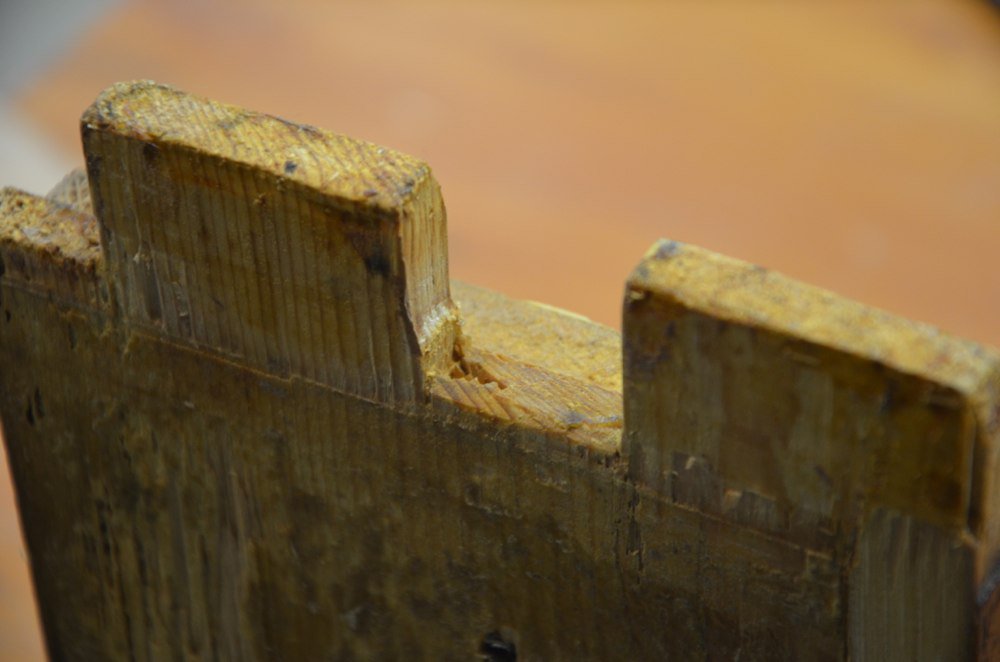 Notice too that on the entry point along the edges of the tenon he created lead in along the edge to ensure the corners don’t snag on the mortise internal walls. It’s something I have always done because I too was trained to do the same. 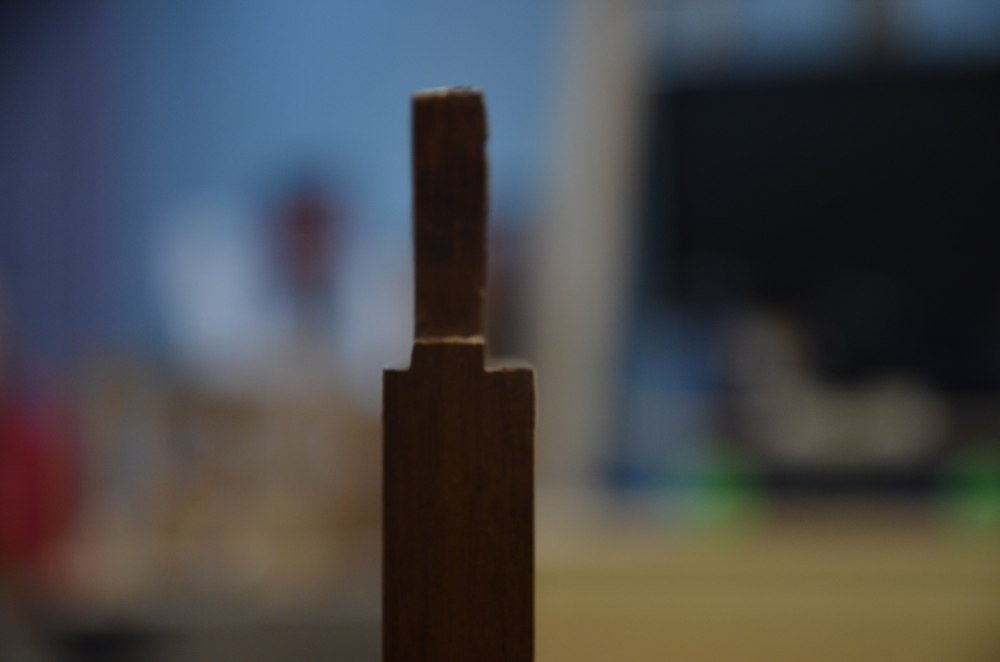 The shoulders of the tenons are undercut for ease and speed and to ensure that the outer rim of the shoulder closes up to the leg without any hindrance. I prefer not to do this as a practice, but sometimes it happens through injudicious cutting. Shoulder-lines for the tenons were knifewall cuts and not cleaned up with a shoulder plane at all. The faces of tenons were all planed level and smooth with no evidence of chisel work. Does that mean they were all sawn or just planed? Not at all. It means both chisel and saw cuts were refined with a rebate plane at least 1 1/4” wide and probably wider. 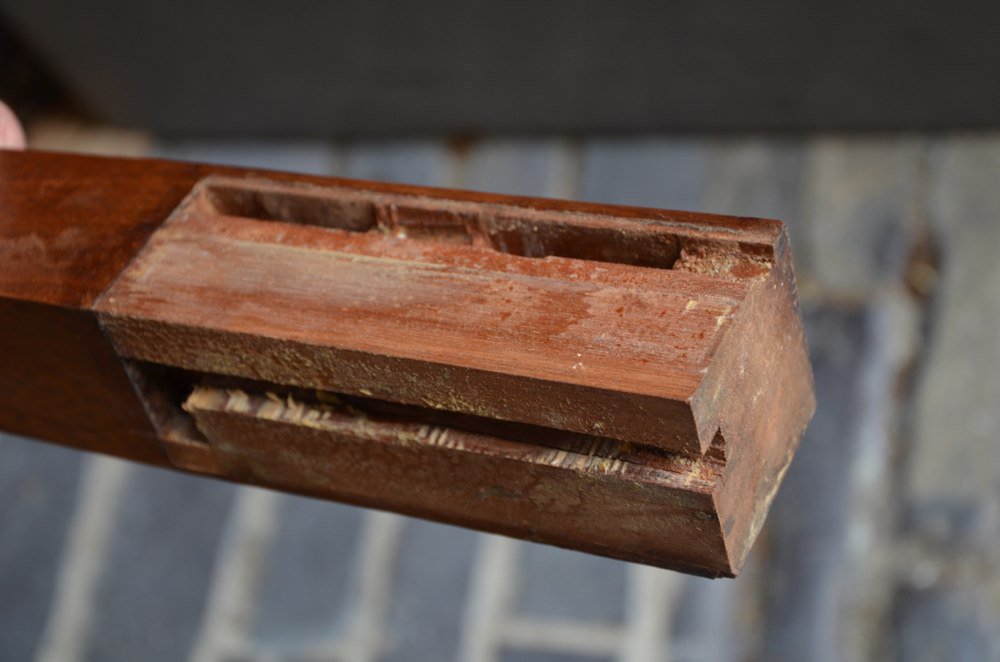 Looking at the mortised legs I was pleasantly surprised by the composition of mortises in relation to the leg. The mortises were not equally placed as would be more normal. The mortises on the short apron are set 5/16” from the outside face and then the long apron is set 7/16” from the inside face.This positioning allowed a full length tenon to both aprons but offsetting the long apron allowed for the knuckle-hinged folding support for the drop leaves to fold out of the way when the flaps were placed down and stowed. 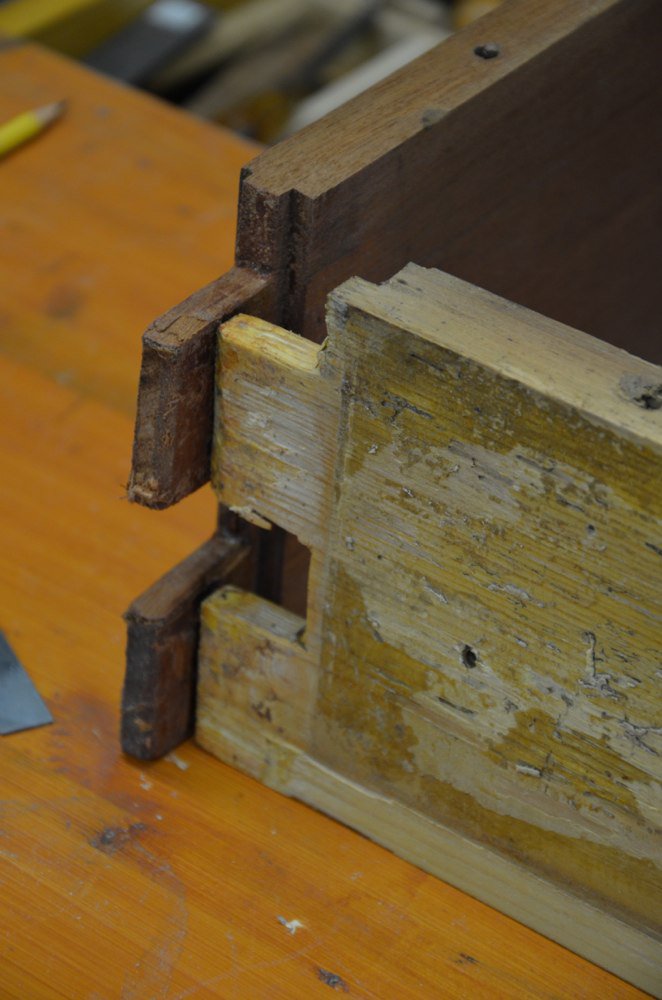 All of the cuts were pristine for the main part. I mean very sharp cuts from hard steel. Both chopped and pared cuts with and across the grain were were clean cutting and so well cut all pores were fully open. This should not surprise anyone. We have made no advances in sharpness in the past two centuries that I know of.