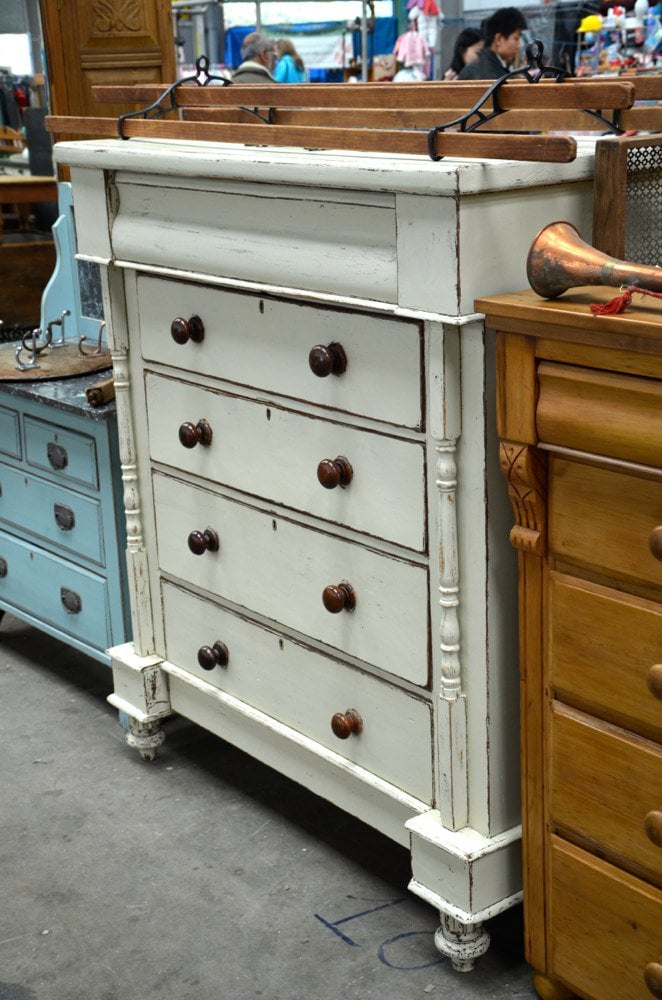 …to Find Buried Treasure in the Present

Yesterday I visited my friend Bill’s car boot booth as I might every other week or so. He has nice pieces, choice and repaired usually. Usually not what I want to buy because I want to knock them apart usually, to see what makes up the guts of everything and discover the unknowns. 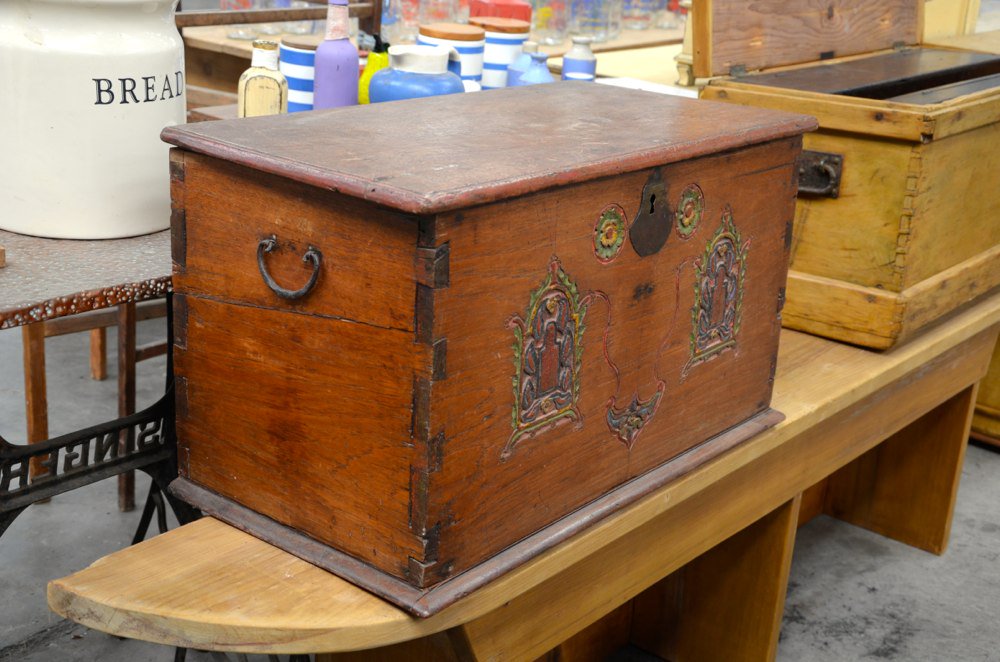 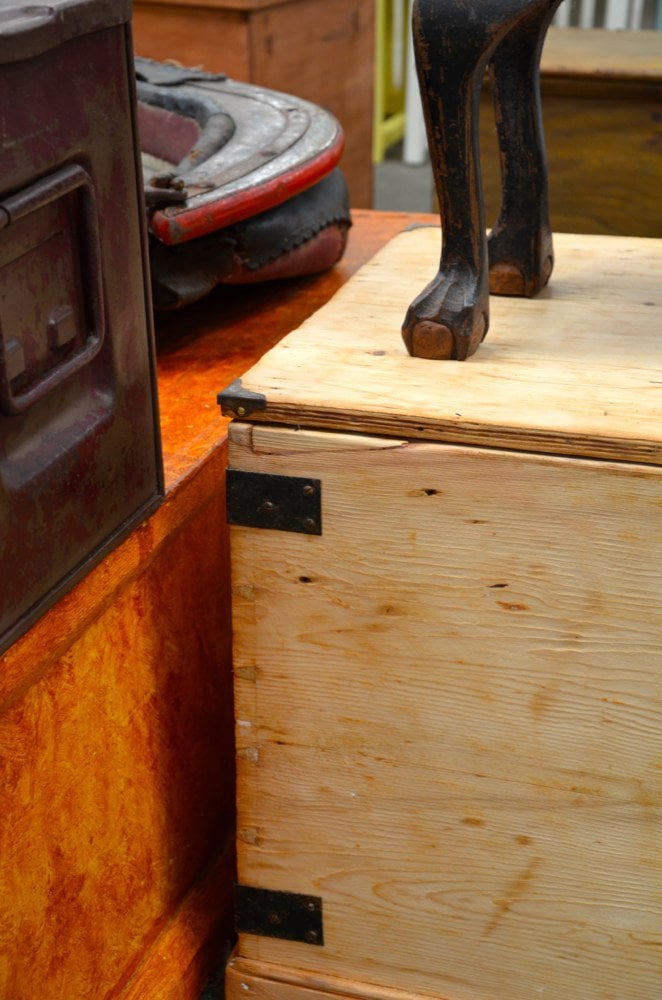 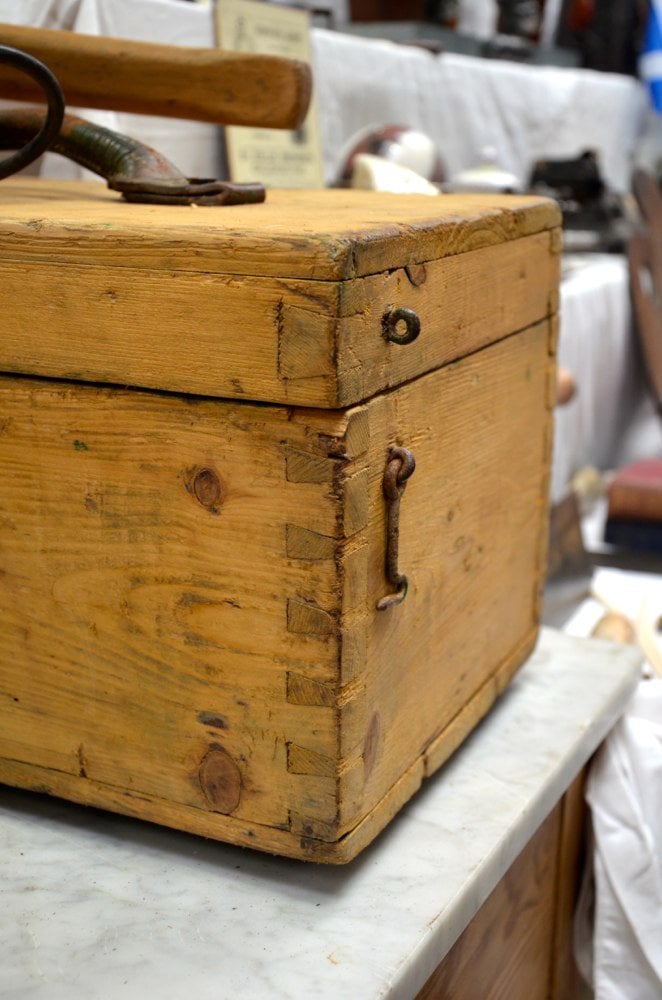 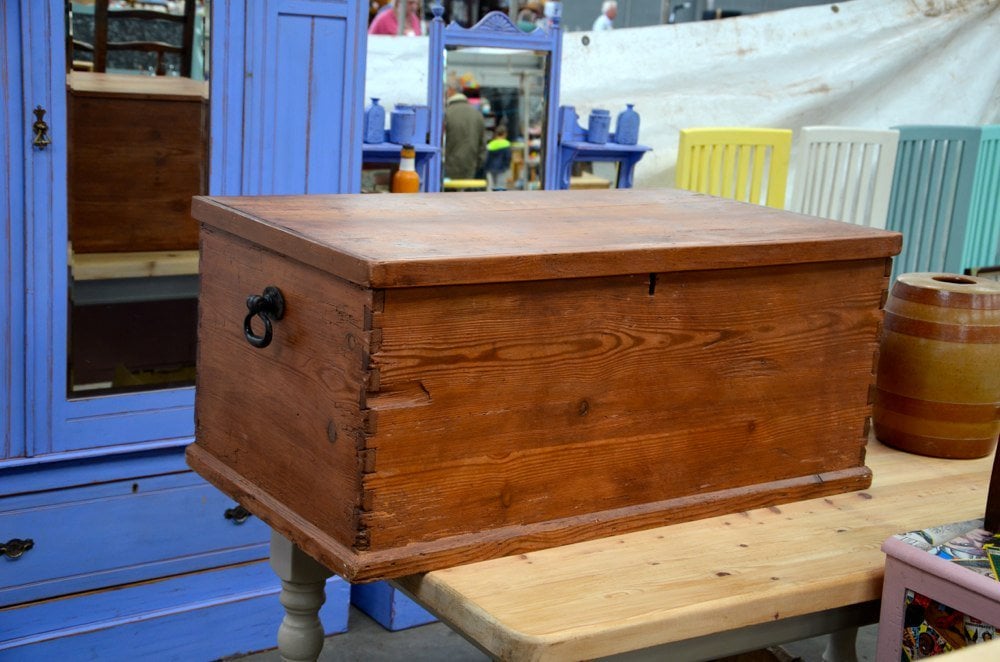 Rarely am I disappointed and I never really feel cheated. Bill has many, many chests to study and one stood out because it was a smaller but practical version of the workman carpenter and joiner tool chest most simply and commonly known as a tool box or tool chest. The corners were dovetailed as usual and so too the skirt. 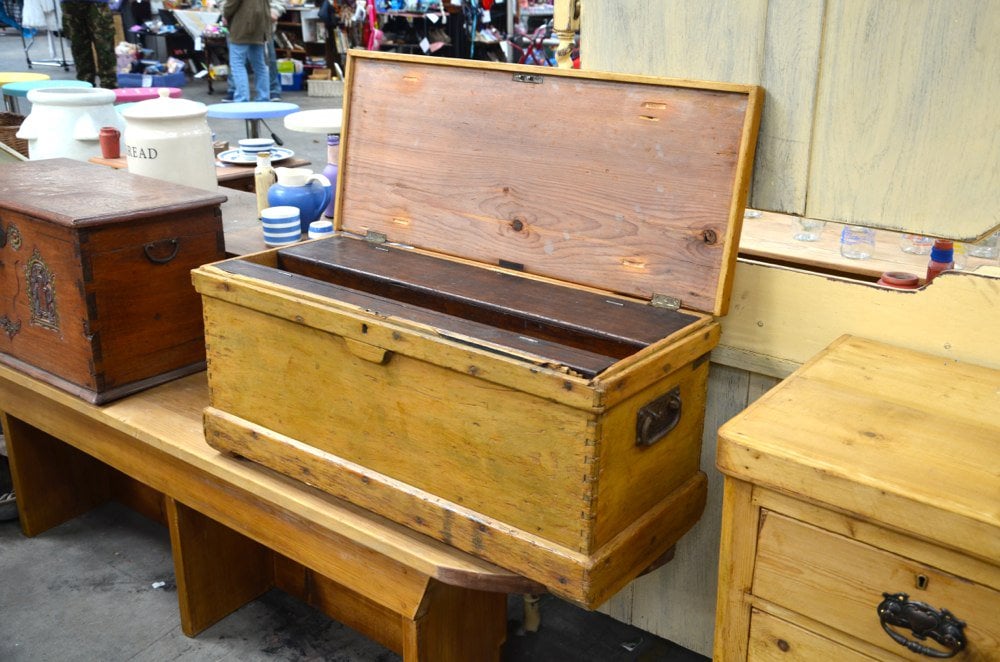 Many details I thought nice created something of a difference to the norm and I considered it as a Woodworking masterclasses project as another tool chest small enough to fit smaller workshops and large enough to accomodate essential tools. It’s not big enough to be really cumbersome and if you made two of them you would have easier access to the inside and be able to fit them accessibly into even a small shop. Another neat thing is that its really scaleable too, so if you wanted a larger version you could scale the whole without any trouble at all.

Tool chests like these gradually decreased in popularity as the machine methods of working supplanted hand tools and the need for hundreds of different wooden planes that were cumbersome, awkward and eventually or gradually unneeded. This tool chest struck me as perhaps a transition toward the joiner’s traveling tool box like the ones I use. Inside, the compartments and tills were long enough and yet quite narrow and so allowed for a box that wasn’t deep too. I tried to imagine the tools a woodworker with a decent amount of tools to work with wood fit his or her tools into the space. This tool box was a craftsman user and built by the owner. It’s been chemically stripped which is not always bad but mostly not good. It affects the joinery, swells the wood and discolours it to this sort greenish yellow colour. Most likely it was originally painted black. That was standard and many tool chests were even coated with black pitch like a telegraph pole if it was going to be used in damp places or transported on hand carts, carriages and ships. 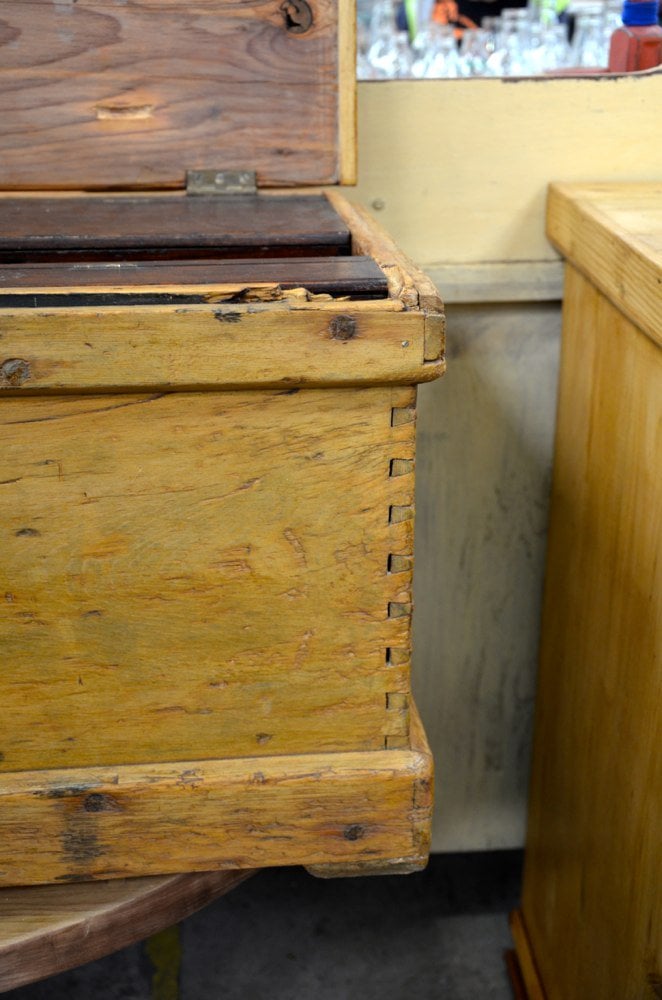 The joinery is free cut in that it wasn’t laid out. I noticed the angles are not too different but that the opposites are all biased in degree. That’s a bad habit to allow to develop but there is a good chance this was hurriedly done by an apprentice or newly qualified joinery. It made little difference to the corners generally, but I think that there was too much inaccuracy to this corner. 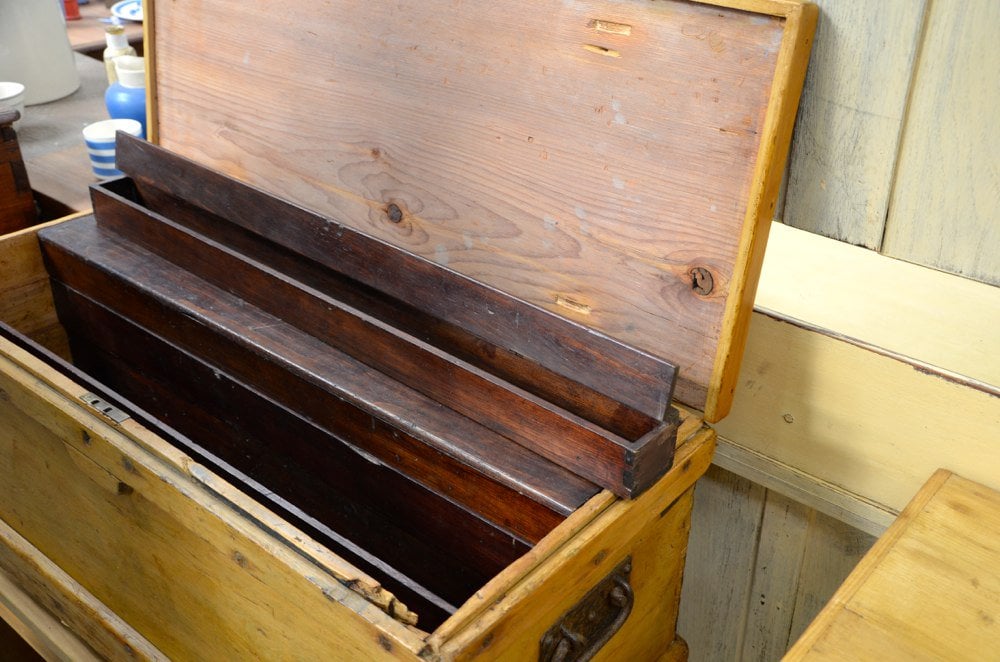 If you look closely you can see the top angle to the dovetail is less sloped than the lower aspect go each. Many early woodworkers gauged size to the dovetails by eye and also the angles too. very fast. When I work the one I make to camera I always make one freely. I will show you how its done one time on a video. Looking at these vernacular dovetails is more common that people think because a man had little time to himself. He may have made it as I did mine at the back of the timber racks where the boss wouldn’t find it or see it being made in his time. It was dark back there and the dovetails weren’t perfect. I wish that I had kept it but I made better ones and then designed the ones I make and teach today and they are vastly better.
This tool chest has many more details I want to go over so will do that shortly if I think it has enough interest. 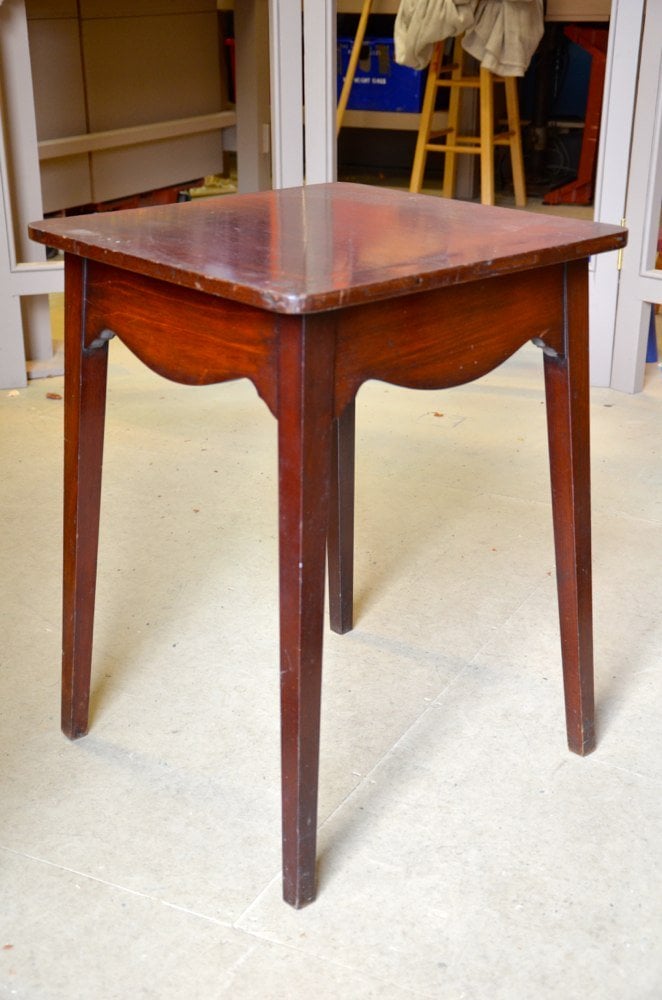 I bought a most lovely table made of a rich mahogany. I felt rich with my £3 purchase and I know others will be too. It has some very unique features, the maker-workman’s mistaken through mortise and I think important considerations for any design whether modern or old. I plane to use this one for woodworkingmasterclasses series where we use the design concept decisions of the originator to create a modern design. 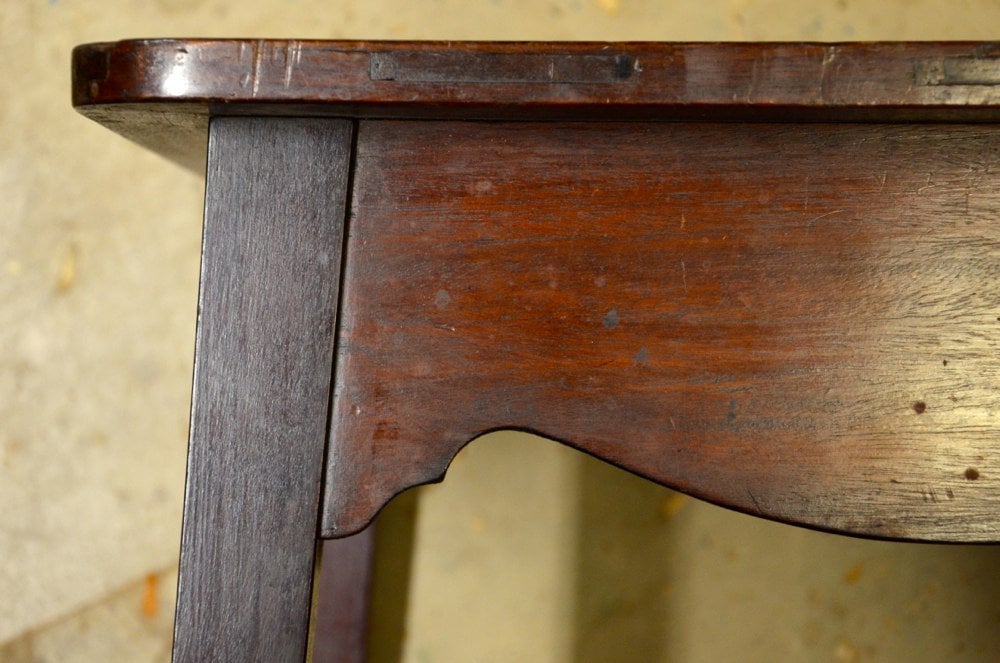 First I want to dissect the design to show you what the man that made it considered the most. I think this is going to be eye opening. 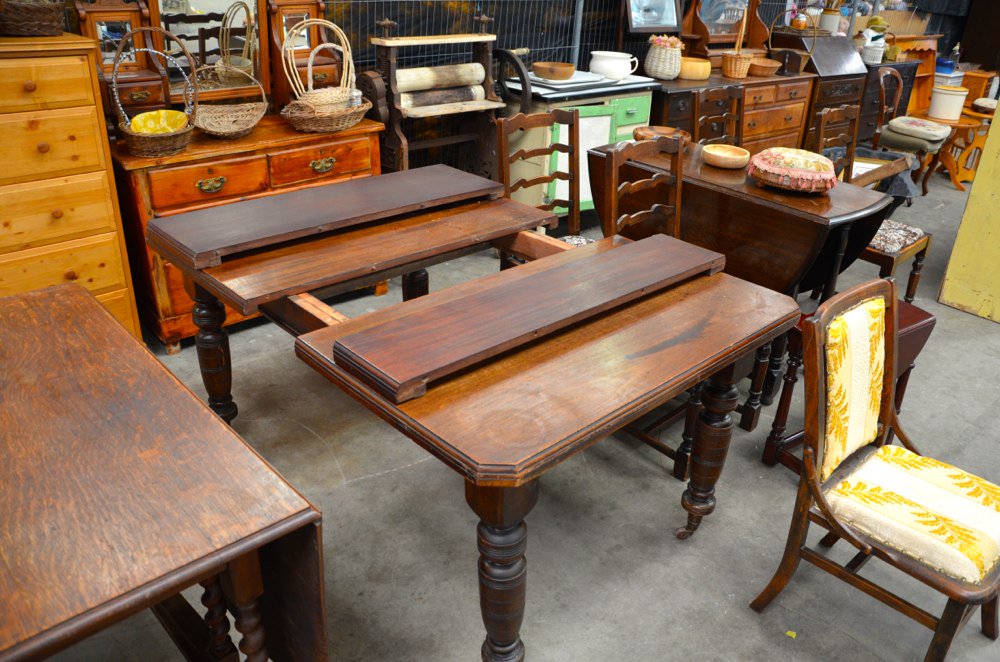 Above is a large table I bought. The legs are a bit monstrous; woodworm too, but none living and still most solid. All in all they are in good shape as far as solidness goes and of course they can be returned and the mortises reused. Not sure what I will use them for. But the tops are very nice wood. Mahogany. I dismantled it yesterday and salvaged what I wanted. This piece too has some very interested material recorded in the textures left by tools. It tells me so clearly how my woodworking forebears trued up their stock and worked the wood to so fine a finish. It confirms also that my ways of working are not so oddball too. Reversing machinist trends in domestic shops has indeed been a challenge. Not a bad job though. Just challenging. My dismantling revealed some detail on secondary woods and of course the shortcuts to completion. I will show things unseen before…I think.
There are other details to the design we shall see that expand our training and also our options. I will show some historic notes and see how they fit today’s work. My plan at the moment is to replicate the small table and then create the modern version in a new and modern design concept. 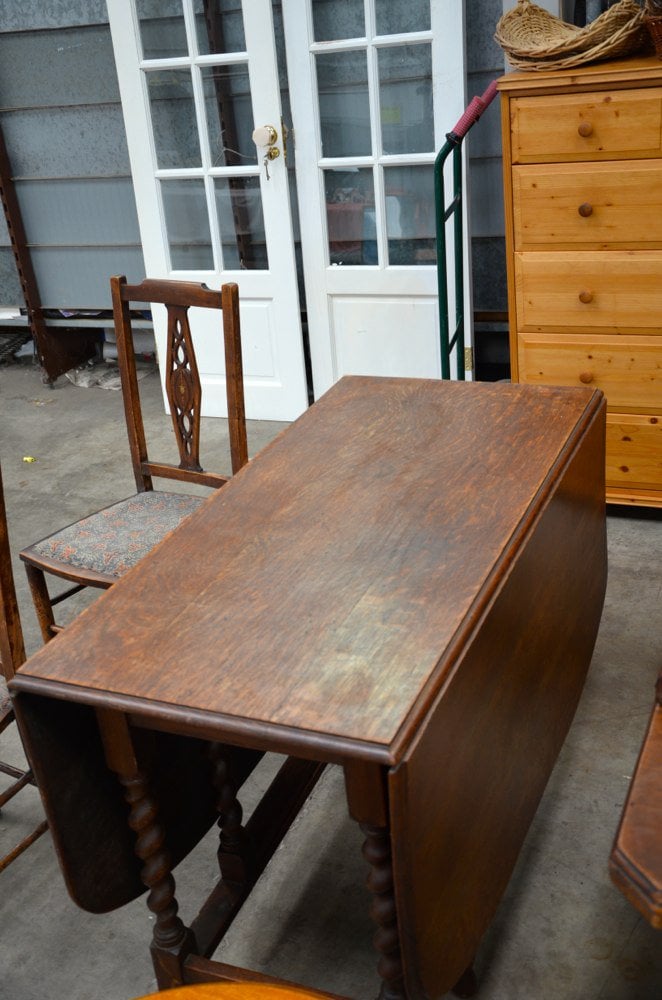 John bought his oak drop-leaf table from the same buyer. He wants to make an up cycled tool chest using both old mahogany and old oak. The oak was passed over at £25 but the top is quartersawn and has very nice figuring. Now he must prep the wood, thin it appropriately and work the grain features into the overall design. There were many telltale signs in this piece too. I think you will find this interesting too. 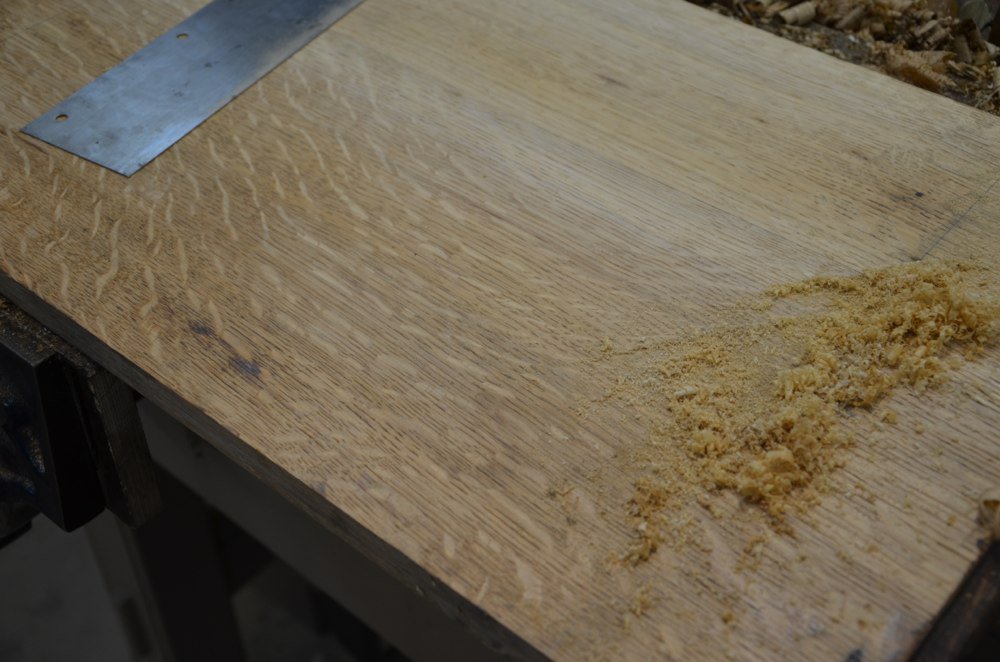 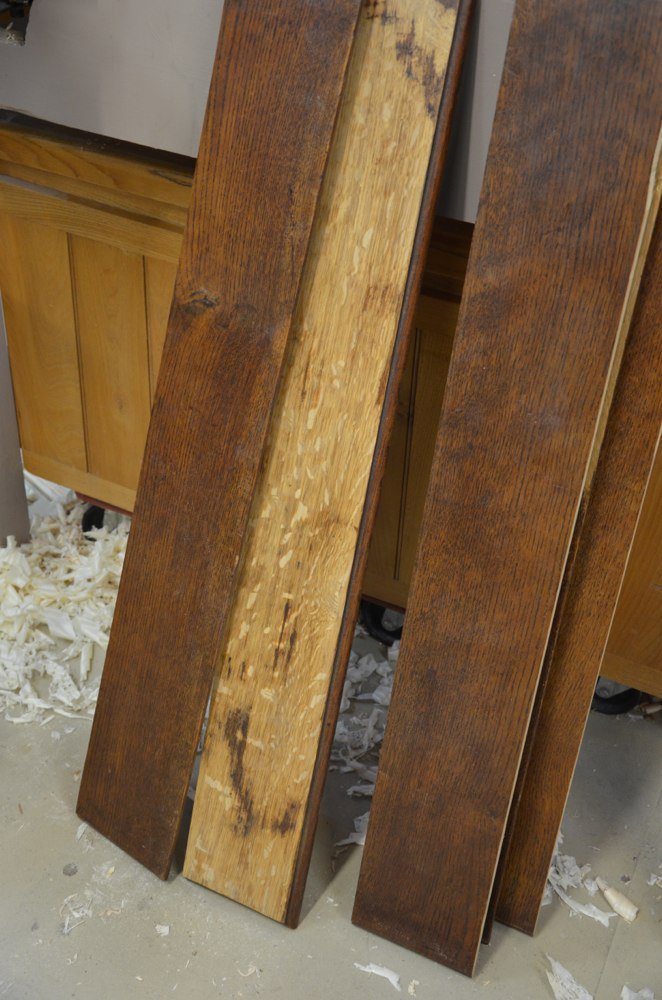 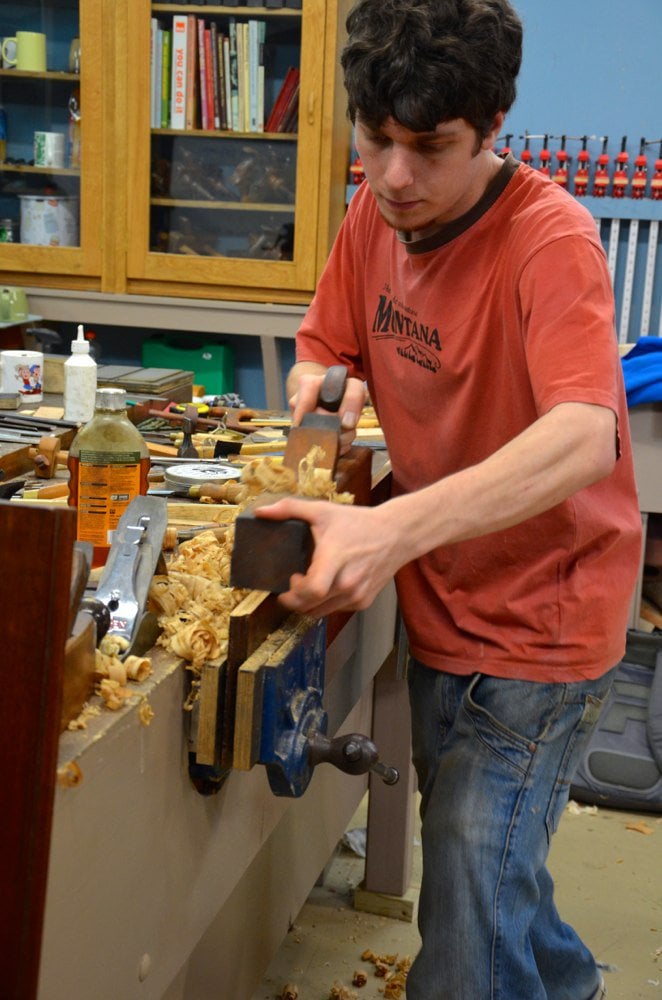 Here he’s cleaning up the surfaces and edges ready for grain reading. You start to see how upcycling works and how we ensure a future by reconciling the lostness of things to become wanted and cared for again.

12 thoughts on “We Look Deeper Into the Past…”