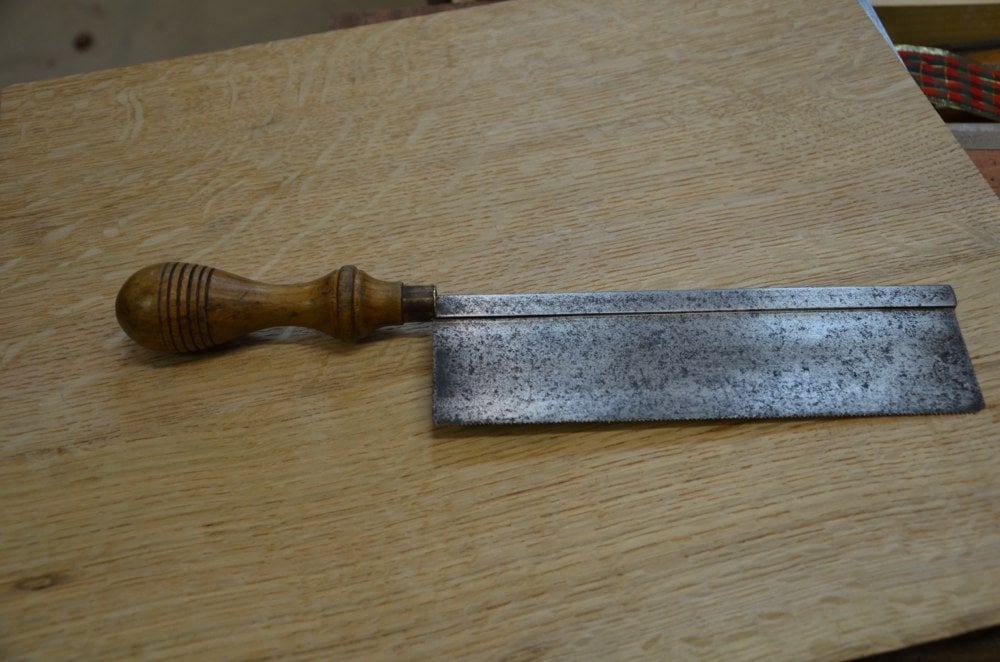 I recently blogged about saw handle sizing because many handles since the last World War often became undefined, utilitarian and too big for anything but brutish work. That’s true of most hand tools that are mass made. Some of you responded with suggestions for high-end saws ranging in price between £100 – £200 per saw and whereas such saws are often quite beautiful to look at and even use, my heart sank a little when I thought about the majority who could never afford such a tool. 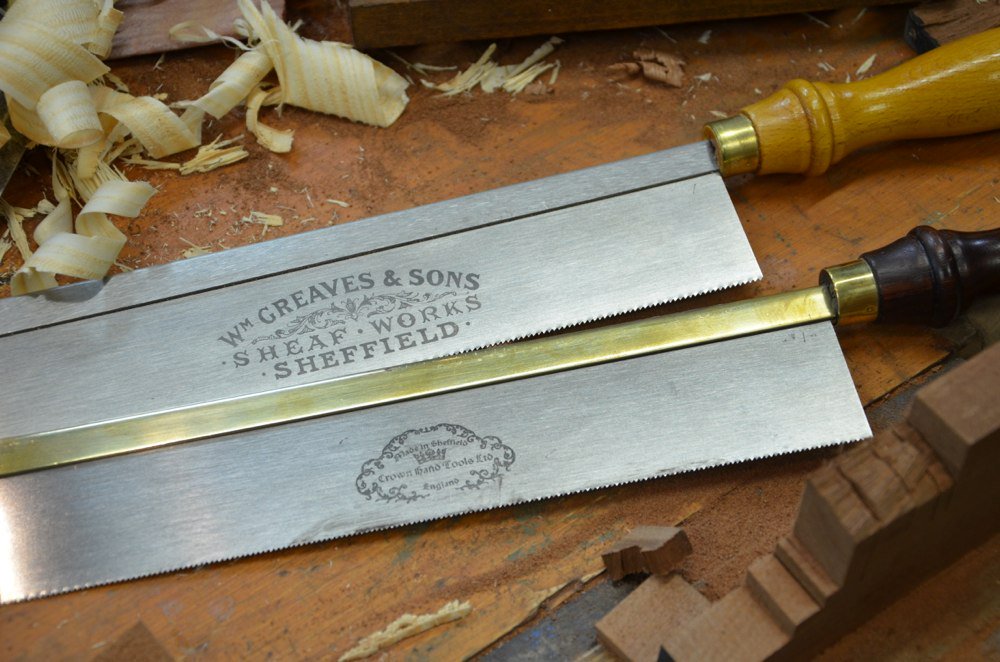 I started to ask myself the question some months and even years ago as to whether it was really necessary to buy high dollar saws or are people simply postponing the process of mastering sharpening so that they can keep their saws at the same level of sharpness of the better quality makers and I concluded that that really was the case. That being the case I went out and bought two saws that cost under £20 to see what they were like in the hand. I decided on inline gent’s saws because these saws are really better than pistol grips for much of the work we do at the bench. I also decided that a 10” was optimal with regards to length. What remained was the depth of cut and, as many if not most furniture joints rely on smaller joints, a gents saw works for many if not most.

The two saws I chose are both a common saw type that’s been in the saw world for just under two centuries. One I bought directly from Thomas Flinn Saw Makers in Sheffield and is marketed under the old brand name of William Greaves & Sons. This saw has a steel back and whereas people might not like steel backs, there is no difference in functionality in the hand or at the bench. There can be a bit of snobbery surrounding saws whether that’s by the makers or the buyers, so I am saying here that both brass and steel backed saws work equally well. Look at the saws more closely and you will see the saws are identically made but one has a turned beech handle and the other turned rosewood. 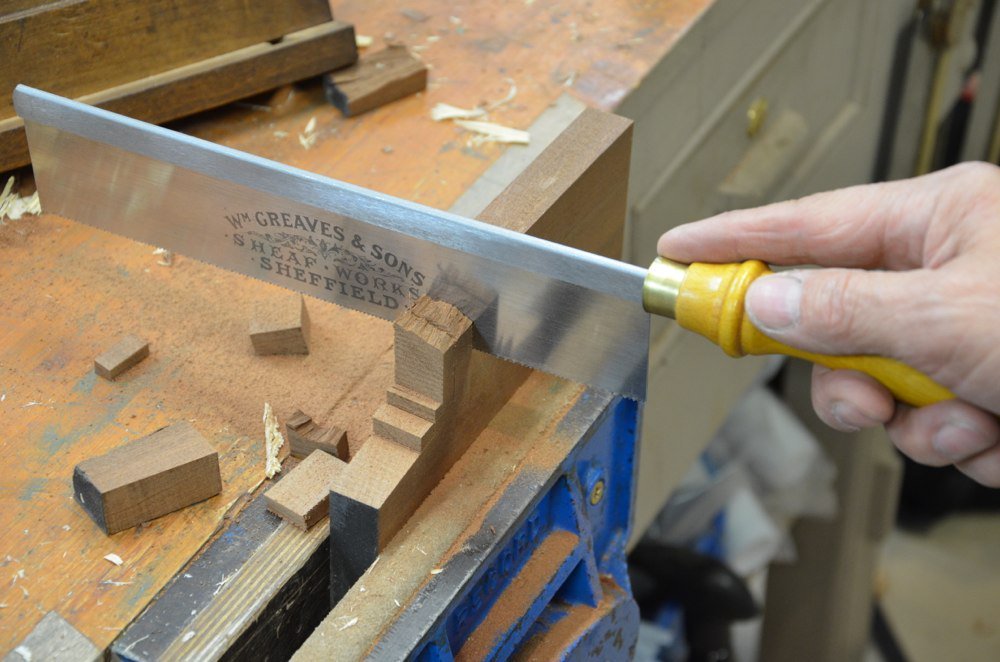 The Greaves saw has 15 teeth to the inch, the most ideal number for the job of dovetailing and tenon cutting and for most benchwork jobs, but more importantly, the saw is equally ideal for sharpening yourself. Don’t make the mistake of buying finer toothed saws for general joinery and most furniture work. They are nigh on impossible to sharpen by eye and hand with the accuracy needed. That said, keep a good Zona 24tpi on hand for fine bead work and you are fully equipped. These saws have hardened plate that will keep an edge for several years. Back to the greaves saw. When the saw arrived it was sharp but over set. A problem resolved between two hammer heads in roughly 10 seconds by anyone no matter the skill levels or skill sets. All I needed to do with this saw was done and it cuts as well as any saw I tried. The cost was £17. 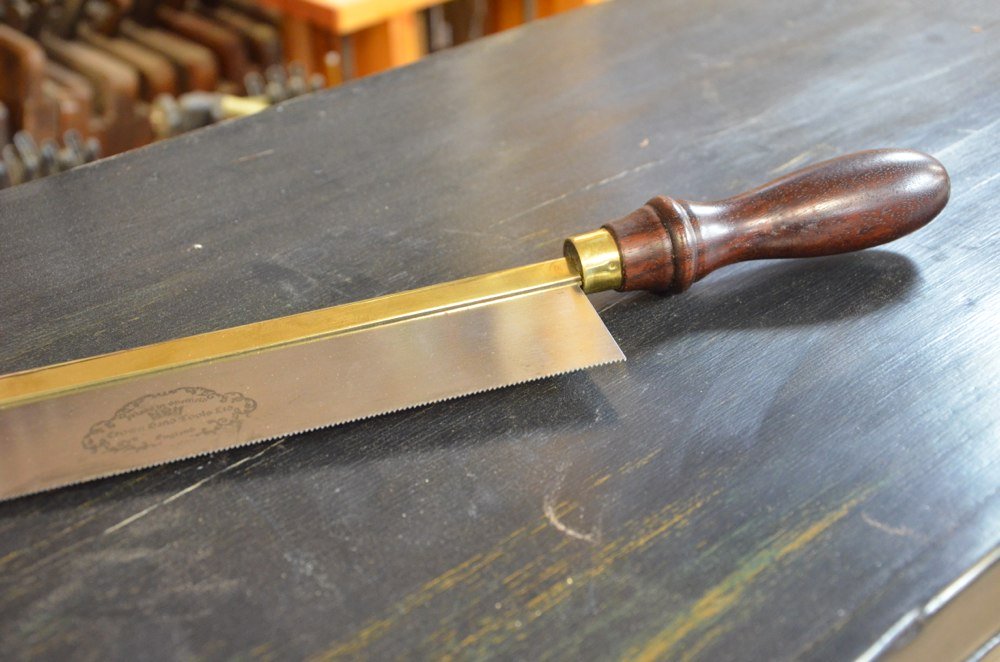 The second saw is also made by Thomas Flinn but sold under the Crown of Sheffield name, and available in the UK, EU and the US. I bought four of these saws for the tests and, unlike the Greaves saw with the steel back, found all of them had a gentle and shallow bend along the length of the spline. This also caused the plate to curve too and even though it was indeed shallow it left me feeling a little disconcerted. Sometimes bends in the saw can be corrected by tapping the spine but not usually if the spine is bent too. Removing the plate didn’t help at all but we found that pulling the spine with the saw fully assembled in between the vise jaws and bending the saw opposite to the bend quickly straightened the spine to perfection. 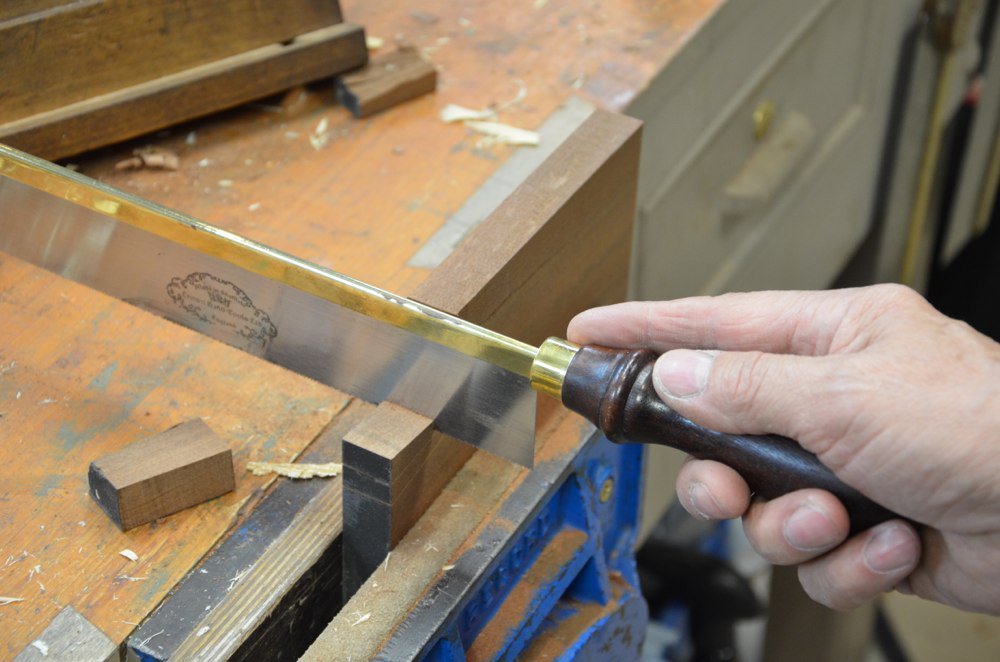 I was disappointed in the sharpness of the saw’s level of sharpness and, indeed, unless you knew differently, you might think this was the standard, but one light stroke through each saw gullet brought the saw up to perfection and wow! Is this saw a winner for me. Brass back, good steel plate and lovely rosewood handle and all for under £20, this saw cuts like a dream. Woodcraft in the US sells the saw and S&L Hardwoods sell the 10” version here in the UK. The saw is 16tpi so little difference between the two name brands. These would be great Christmas gifts for any serious woodworker or indeed anyone at all.